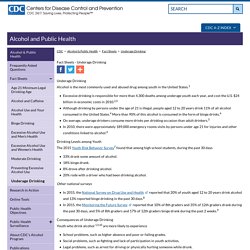 Although drinking by persons under the age of 21 is illegal, people aged 12 to 20 years drink 11% of all alcohol consumed in the United States.3 More than 90% of this alcohol is consumed in the form of binge drinks.3 On average, underage drinkers consume more drinks per drinking occasion than adult drinkers.4 In 2010, there were approximately 189,000 emergency rooms visits by persons under age 21 for injuries and other conditions linked to alcohol.5 Drinking Levels among Youth The 2013 Youth Risk Behavior Survey6 found that among high school students, during the past 30 days. 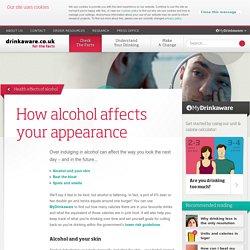 Alcohol Education Trust. Binge Drinking. Listen Risks of Binge Drinking Many people don't think about the negative side of drinking. 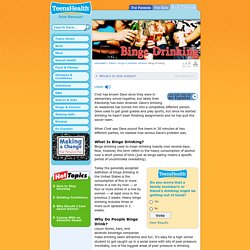 Although they think about the possibility of getting drunk, they may not give much consideration to being hung-over or throwing up. You may know from experience that excessive drinking can lead to difficulty concentrating, memory lapses, mood changes, and other problems that affect your day-to-day life. Alcohol. Listen How Can I Avoid Drinking? 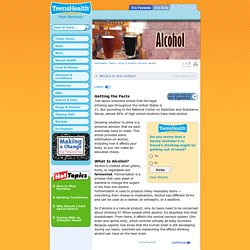 If all your friends drink and you don't want to, it can be hard to say "no, thanks. " No one wants to risk feeling rejected or left out. National Institute on Alcohol Abuse and Alcoholism (NIAAA) Drinking too much – on a single occasion or over time – can take a serious toll on your health. 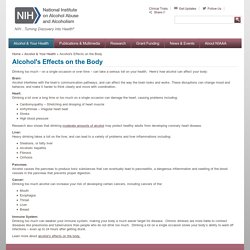 Here’s how alcohol can affect your body: Brain: Alcohol interferes with the brain’s communication pathways, and can affect the way the brain looks and works. These disruptions can change mood and behavior, and make it harder to think clearly and move with coordination. Heart: Drinking a lot over a long time or too much on a single occasion can damage the heart, causing problems including: Health Effects of Alcohol. Men Men who regularly drink above the daily unit guidelines risk a whole host of health issues – from low energy and sexual difficulties in the short term, to heart disease and cancer in the long term. 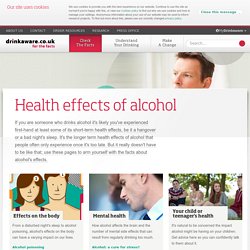 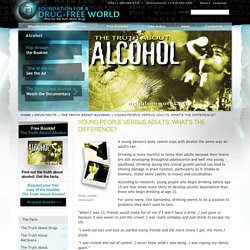 Drinking is more harmful to teens than adults because their brains are still developing throughout adolescence and well into young adulthood. Drinking during this critical growth period can lead to lifelong damage in brain function, particularly as it relates to memory, motor skills (ability to move) and coordination. According to research, young people who begin drinking before age 15 are four times more likely to develop alcohol dependence than those who begin drinking at age 21. For some teens, like Samantha, drinking seems to be a solution to problems they don’t want to face. “When I was 13, friends would make fun of me if I didn’t have a drink. “I went out less and less so started losing friends and the more lonely I got, the more I drank. 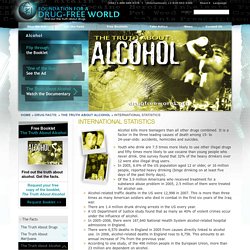 It is a factor in the three leading causes of death among 15- to 24-year-olds: accidents, homicides and suicides. Youth who drink are 7.5 times more likely to use other illegal drugs and fifty times more likely to use cocaine than young people who never drink. One survey found that 32% of the heavy drinkers over 12 were also illegal drug users. In 2005, 6.6% of the US population aged 12 or older, or 16 million people, reported heavy drinking (binge drinking on at least five days of the past thirty days). Of the 3.9 million Americans who received treatment for a substance abuse problem in 2005, 2.5 million of them were treated for alcohol use. 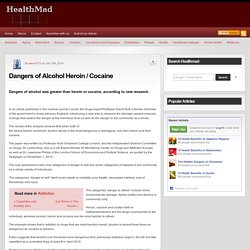 The results of the analysis showed that when both of the above factors combined, alcohol abuse is the most dangerous or damaging, only then heroin and then cocaine. The paper was written by Professor Nutt of Imperial College London, and the Independent Science Committee on Drugs, Dr. Leslie King, who is a UK Expert Adviser for Monitoring Center on Drugs and Addiction Europe, as well as Dr. Lawrence Philips of the London School of Economics and Political Science, as quoted by the Telegraph on November 1, 2010. The new assessment uses nine categories of danger to self and seven categories of hazards to the community as a whole variety of individuals. 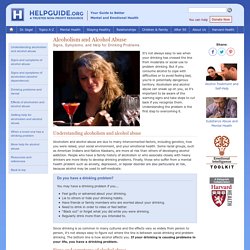 Some racial groups, such as American Indians and Native Alaskans, are more at risk than others of developing alcohol addiction. People who have a family history of alcoholism or who associate closely with heavy drinkers are more likely to develop drinking problems. Finally, those who suffer from a mental health problem such as anxiety, depression, or bipolar disorder are also particularly at risk, because alcohol may be used to self-medicate. Under Construction: Alcohol and the Teenage Brain. Alcohol, Peer Pressure, Teenage Underage Drinking.

Depression. The Role of Depression and Anxiety in Substance Use Although it is common for teens to experience frequent mood swings, your teen may be experiencing a form of depression if clusters of the following thoughts, feelings, and behaviors persist for two weeks or longer. Prompt identification and treatment of depression can reduce its durations and severity. Look for the following signs: (Adapted from U.S. 77fe7980b341656691bd09adc885b39a.jpg (JPEG Image, 1000 × 1000 pixels) Alcohol and your Brain. Yourguidetodealingwithalcohol.pdf. Conversations on teen alcohol abuse. Tuesday, August 26th, 2014 Underage drinking is a very real problem in South Africa. While statistics show that one out of every two teenagers in the average South African home uses alcohol, it is especially concerning given the potential harm of alcohol to developing young bodies and minds.

SAB, through various initiatives, has taken a proactive approach to curbing underage drinking in South Africa and encouraging the youth to take charge of their own futures with their You Decide programme. One aspect of the programme has been an emphasis on conversations with South Africa’s youth. Through real life school visits as well as online presence on Mxit, Facebook and Twitter, the You Decide initiative has begun an ongoing conversation with South Africa’s teenagers.

The programme’s most prominent platforms showed a great interest from the youth in their follower numbers, as campaigns such as the #DoStuffZA competition encouraged online conversation: Raising the profile of the conversation. Alcohol abuse. Along with the highest rate of HIV/AIDS in the world(2), South Africa’s (SA) per capita rate of alcohol consumption is among the highest in the world(3), It seems feasible that these two phenomena are related, but does alcohol consumption increase the risk of acquiring HIV?

This paper aims to discuss the risk factors associated with HIV/AIDS and alcohol abuse. A brief history of alcohol use in South Africa. Alcohol and South Africa's Youth. South Africa (SA) is a hard drinking country. It is reckoned that we consume in excess of 5 billion litres of alcohol annually; this figure is likely to be higher still if sorghum beer is included, and equates to 9 - 10 litres of pure alcohol per person. According to a World Health Organization (WHO) report released in 2011, this is among the highest per capita consumption rates in the world, and it is continuing to rise.

More alarming still is that the WHO awards South Africa a score of 4 (drinking 5 or more beers or glasses of wine at one sitting for men, and more than 3 drinks for women) out of 5 on a least risky to most risky patterns-of-drinking scale – the higher the score, the greater the alcohol-attributable burden of disease for the country.2 This readership will not need reminding of the associated disease burden. But it is worth contemplating the financial and social cost. Teenagers & Alcohol: A guide for parents. Text: Amanda Ndlangisa. Pictures: Thinkstock. Article from the December2012 issue of Bona Magazine.