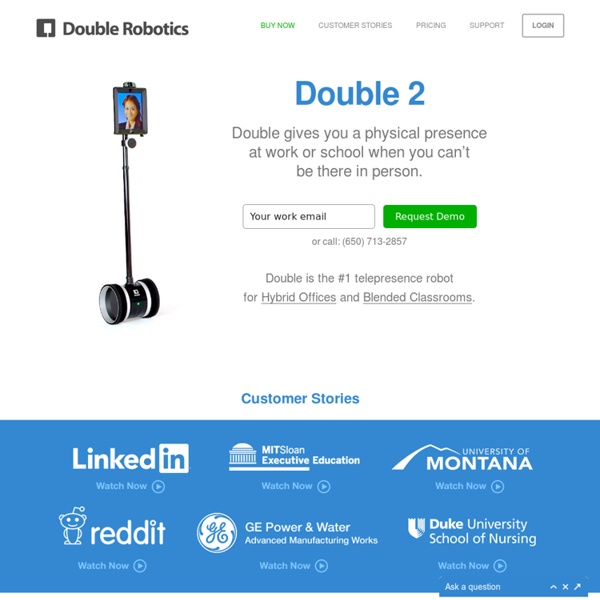 Q. Which platforms can I drive from? You can drive from an iPad, iPhone, iPod touch, or desktop Chrome web browser. Q. Is the video encrypted? Yes.

The Double Robotics iPad-Equipped Teleconferencing Robot Is Shipping It’s impossible to be in two places at once. But Double Robotics, a wheel-equipped robot with an iPad for a face, has finally made that possible. The company has begun shipping units of the Double to customers who pre-ordered and coughed up the $2,000 to get one. LS460W Video Review - DOD Tech Canada The DOD LS460W was just reviewed by Luke from Dimarco Productions. He is an automotive filmmaker and blogger. In this video he reviews the DOD LS460W! In a second video Luke describes the benefits of a dash camera. * Ultra realistic android Androids (current) Below are some of the androids currently being developed around the world. This list will be updated as more information becomes available. Actroid This female android was first unveiled in 2003. Several more advanced units have since been developed.

Control your devices with Bitbrick Smartband Flick to play, take hands-free selfies, post on Facebook and monitor physical activities. Bitbrick is a Smartband with Entertainment, Social and Fitness Features. Flick to play, forward, pause and control the volume of your music while running, walking, hiking and cycling even when your hands are busy with only one flick of the wrist. Catch the best moments with your Smartphone, include all your friends up to te feet away and take hands-free selfies. Bitbrick Band allows you to control your PowerPoint or Keynote presentations with simple hand gesture up to eight meters from the screen. Identify who is calling you and if you are busy you can respond with an SMS automatically with a hand gesture.

Chiara Robot - Gadgets Hacked - DIY Tech Blog You may remember the Hexapod Robot that Matt Denton built. I think this new Chiara Robot could give Matt a run for his money as far as features and power. Chiara was developed at Carnegie Mellon University’s Tekkotsu lab, best of all it will be manufactured and sold by RoPro Design, Inc. David Touretzky, Gaku Sato, Ethan Tira-Thompson, and David Rice have done a great job on this system. I can’t wait till it gets released to see what its full potential is!

How Rethink Robotics Built Its New Baxter Robot Worker Photo: David Yellen for IEEE Spectrum MEET BAXTER: Rethink Robotics has developed a next-generation factory robot that is versatile, easy to program, and costs just US $22 000. In the center of an otherwise unremarkable office stand six large robotic torsos mounted on pedestals and positioned along a bench that’s covered with piles of plastic widgets. One robot methodically moves widget after widget onto a conveyor belt, the animated face on its LCD screen displaying an expression of quiet concentration. The task is mundane, but the robot is not: This is Baxter, the culmination of nearly five years of secretive development, based on the vision of Rodney Brooks, possibly the world’s most celebrated roboticist.

Getting Started with Unity for iOS   This page describes how to build and deploy the demo Cardboard scene included in the Cardboard SDK for Unity. We are assuming very little prior Unity experience, but that you are familiar with developing applications for iOS. If you are looking for instructions for building Cardboard on Android with Unity, see the Getting Started with Unity for Android page. StickNFind - Home of the StickNFind, StickNFind Pro, and MeterPlug Discover How Beacons Deliver Innovation by adding new and simple contextually aware beacons to your retail store solutions and enterprise applications Drive Marketing Campaigns in New Ways by triggering actions you control linked to your retail store services and indoor venue mapping solutions ducts based Increase Customer Engagement by engaging customers indoors within geo-fence triggers that location to offer welcome, loyalty and incentive offers

These $10 Robots Will Change Robotics Education And the future of robotics education in Africa is ... Chupa Chups? When the African Robotics Network announced their $10 robot design challenge this summer, co-founder Ken Goldberg was careful not to share too many expectations, lest he influence contestants' designs. But he never imagined one of the winning entries would prominently feature a pair of Spanish lollipops. The challenge, hosted by AFRON co-founders Goldberg and Ayorkor Korsah, emphasized inexpensive designs to help bring robotics education to African classrooms.

Clear Hot Bending Glass Top Tv Stand With Clear Tempered Glass Shelf - Buy Modern Tv Stnad,Hot Bending Glass Tv Cabinet,Glass Tv Cabinet Product on Alibaba.com Product Name: Modern TV Stand/Hot Bending Glass TV Cabinet Item No: T008 Specification(L*D*H): 290X50X42CM Material: Bent Glass Packing: 1pcs/1ctn G.W(kg): 113.00 Audioair Wants To Unlock Audio From Muted TVs Everywhere And Give Your Local Bar A New Way To Advertise If you’ve ever been in a sports bar with your friends to watch a big game, you’ve likely run into the “muting” problem. While the bar may have two dozen TVs, each might be playing a different game, and there’s either too much sound or none at all. At most local restaurants, bars, airports and health clubs, you’ll find TVs muted for this very reason. Some have opted to, say, put speakers on tables in their bars to project sound more directly, but the problem is that this puts a damper on any socializing you planned to do with your friends and fellow bar mates. Might just be me, but repeatedly yelling “WHAT DID YOU SAY?!”