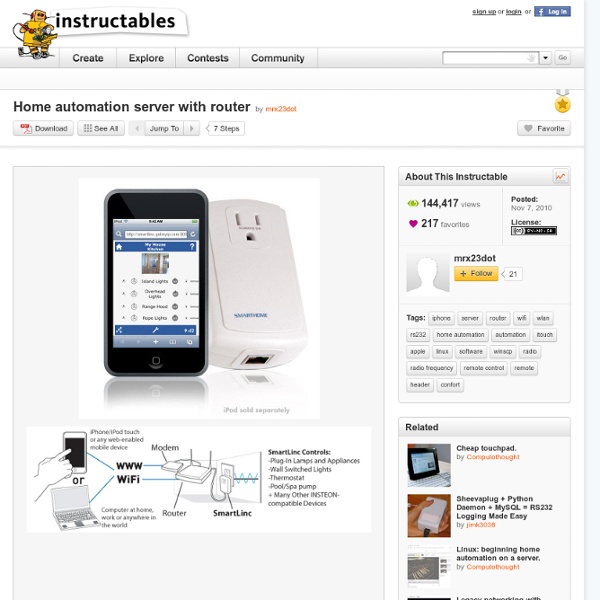 Install the Linux based OpenWRT firmware on the router. The TL-WR741ND instructions can be found here: If you are stuck, start here: After you have a working SSH connection you can proceed. Because of the router (by default) runs the web admin page on the port 80, we need to add a secondary port to serve our custom web site. Download WinSCP, to simply do this through SSH. Set up a new connection: Host name: normally 192.168.1.1 (by default) Port: 22 User name: root Password: what you gave after installation File protocol: SCP Find this file: /etc/config/uhttpd Copy the following into it: config 'uhttpd' 'secondary' option 'listen_http' '81' option 'home' '/HomeAutomation/www' option 'cgi_prefix' '/cgi-bin' option 'script_timeout' '60' option 'network_timeout' '30' And save it.

Clever fellow sends text messages to start his car Stop it, Spiegel. You're bringing back repressed memories of earning my 5-year EE degree. Arduino has its place. If you need to rapidly prototype something or fire off a one of a kind item where packaging isn't a concern; it is a decent go-to. If you need ultra low power consumption you can use something like TIs MSP430 line, which are available with built in wireless. If you need power, there is always the ARM M0 line, If you need USB support, atmel makes a few nice critters. The world consists of more than Arduino, but I'll be damned if the Arduino doesn't do a lot of the jobs well enough. If you are developing a commercial product, stay away from the Arduino.

Set Up a Fully Automated, Torrent-Seeding Media Center SExpand @macrumpton: Click the image for the full size to see what I'm talking about. Here's a side-by-side shot of Miro and MPC, both playing the same frame of "Pioneer One" S01E01 720p (h264) mkv file. Even if you don't want to go the media center route, and are content with Miro for downloading, I highly suggest you get a good graphics card (if you need one) and a separate program to decode and play back the files. Miro is not comparable to a true Media Center by any stretch of the imagination. Things Miro is lacking: • Good support for remotes and internet/eventserver based control for phones. • Proper databasing (sort by name, aired date, release date, actor, genre, MPAA/TV rating, duration...) • Auto-discovery of missing supplemental media (Fanart, screen caps, cover art, subtitles and lyrics etc.) • Boot as an OS for HTPCs • User login with parental controls • Scripting and skinning extensability • Media flagging

DIY Voice Activated Home Automation Voice recognition is no longer in infancy – You’ve got Siri on the iPhone and Google Now on Android (plus other Android apps too). This project shows you how to use it to automate your home without spending big bucks. The core of this project is a VRBot speech recognition module. Next, the project creator used some low-cost wireless light switches (you could also use relays). The VRBot speech recognition module recognizes 32 custom voice commands. Once a command is recognized, a wireless switch is activated via a radio receiver. Popular Home Automation Projects:

Bluetooth SNES Controller for Android So this is my first instructable... A little over a year ago I was working on my ECE senior design project, which was a bluetooth SNES controller for Android. Shortly after completing the project, I posted a working video on Youtube. Since then I have received quite a few requests for more info or even a tutorial on how to make one. I figured I had put it off long enough, and now I finally got a video together. I apologize in advance for the sub-par production value (I'm no Ben Heck), it was literally my first exposure to iMovie, and I'm sure it shows. Here is the source code for the Arduino, along with my Easymote app from the tutorial (you won't find it on the market) Arduino source: Easymote apk: Here is a video showing my battery operated controller along with playing some Donkey Kong and Zelda on my Touchpad, unfortunately my rechargeable controller was built for a contract and I no longer have it:

Listening to Satellites on a Handheld Scanner Check out the author’s website, for lots of interesting articles. If you link to this instructable from another website, please include a link to the Neat Information website. This tutorial is more of an introduction about what’s possible rather than specific procedures. If you find it interesting then use your favorite search engine to look for additional information. Handheld scanners are typically sold in electronics shops. A relatively simple new scanner will cost around $100. Anybody (at least in the United States) is permitted to monitor non-cellular radio frequencies. It’s pretty amazing that a handheld radio which is ordinarily limited to about 30-40 miles, depending on your terrain, can hear a clear signal coming from a tiny satellite in space orbiting over a hundred miles overhead. The trick is line-of-sight. So what’s higher than outer space?

How to Listen to RADAR Signals From Space. This instructable can be accessed at the author's website - If you link to this instructable from another website, please include a link to the Neat Information website. This article is copyrighted and may not be reproduced without permission. Okay, the title of this instructable is a little bit misleading. The Air Force Space Surveillance System consists of three extremely high power RADAR transmitters in a East-West line across the southern United States. The three transmitters are located at Jordan Lake, Alabama, Lake Kickapoo, Texas, and Gila River, Arizona. Besides the space fence the Air Force also operates a worldwide network of RADARs with tracking antennas, automated telescopes, and sensors in space. In 1994 NASA actually put some intentional space debris into space to help calibrate the Air Force’s worldwide tracking network.

Audio Delay Module This project shows you how to make a unit which can produce a delay of up to 8 seconds on an input audio signal. The circuit outputs a delayed version of an input audio signal. Depending on the amount of memory implemented and the sampling rate selected, it can store from 3 seconds to 8 seconds of audio. The audio input will be delayed by an amount selectable by the user. This device can be used to produce a delay for many purposes. Some possible applications are: Sound effects , such as echo, can be produced by adding a delay to an input signal. At any rate, the device described here can be a lot of fun to play and experiment with.

Dub Cadet: Holographic MIDI & LED Controller for Arduino - Part 1 I believe holographic musical instruments will be commonplace in the future, showing up everywhere from schools (for education), to homes (for fun), to media offices (for creativity), and in music studios (for production). The reason is simple: The holographic musical instrument takes a complex process and radically simplifies it: see another demo video here. I'm using the term 'holographic music' to mean multidimensional musical structures mapped to 3d surfaces to be decoded through rotational motion. Just as optical holograms modulate light based on the 3D viewing angle, we can modulate sounds based on the relative 3D orientation of an object. This is Part 1 of a 3-part series on a technology that I am calling the Dub Cadet: a holographic musical instrument. The hobby prototyping boards that I used in this project will rack up a bill of around $200.