Businessinsider.com. 5 lessons for companies that plan to survive Amazon's retail. Today GMM's India plant is growing by more than 100 percent annually because (believe it or not) China has been priced out by many American manufacturers and because GMM's technology is designed to solve client problems. 3. 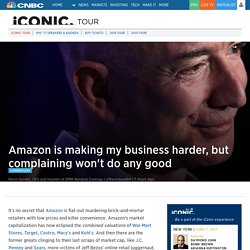 Creative marketing is a necessity. Ten years ago components like nonstick coatings were almost invisible to the consumer because of the power of the client brand (i.e. consumers trusted Calphalon or KitchenAid and didn't really care who supplied the coating as long as it worked well). The Changing Face of American Malls. At No. 2 US mall developer General Growth Properties (GGP), which manages such properties as Bridgewater Commons mall in New Jersey and Spokane Valley Mall in Washington, the percentage of its space occupied by restaurants and other food sellers is forecast to increase to 20% by 2025 from 13%, said GGP CEO Sandeep Lakhmi Mathrani in an earnings call on May 1. 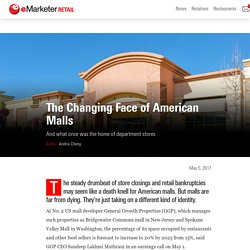 Restaurants aren’t the only mall share gainers. As US box office sales hit a record $11.4 billion last year, GGP has inked close to 60 movie theater deals in its properties, Mathrani said, adding entertainment deals will continue to rise. On the other hand, apparel will decline to about 40% of GGP’s property mix, down from about 50%, he said. The changing face of the American mall is another sign of consumers' shifting priorities and tastes, with an increasing preference to spend time and money on experiences and services. The Market Is Underestimating Amazon. Businessinsider. Businessinsider.com. The data lifeboat heading for Aussie retail. Simon Morgan Many pundits take a gloomy outlook on the future of Australia’s existing retail players, but I believe many can innovate their way back into the black. 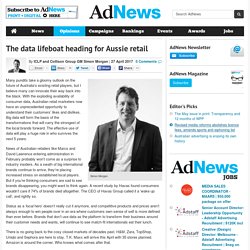 With the exploding availability of consumer data, Australian retail marketers now have an unprecedented opportunity to understand their customers’ likes and dislikes. Big data will form the basis of the transformations that will carry the strongest of the local brands forward. Amazon in Australia: Company distances itself from ‘destroy Australian retail’ comments. Shoppers roam through an Amazon Go store in the United States. 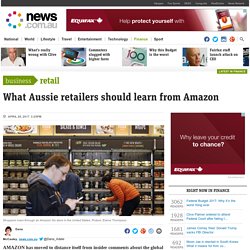 Picture: Elaine Thompson AMAZON has moved to distance itself from insider comments about the global giant’s plans to “destroy” Australian retail. And the man behind the controversy has spoken out about what local retails should learn from the e-commerce company, which today announced its quarterly sales were up 22.6 per cent to $US35.7 billion. Scentre Group maintains guidance despite retail gloom. The country's biggest retail landlord, Scentre Group, has shrugged off concerns about the sector to unveil a solid first-quarter performance. 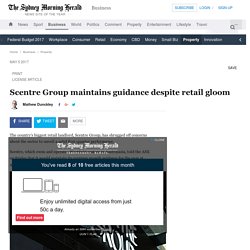 Scentre, which owns and operates Westfield centres in Australasia, told the ASX on Friday that it would maintain its earnings growth guidance for the year at 4.25 per cent. This is a modal window. This modal can be closed by pressing the Escape key or activating the close button. Caption Settings Dialog Beginning of dialog window. Amazon in Australia: Shopping centres living in fear of online giant’s arrival. Amazon is expanding in Australia by inviting local businesses sell their products on the company's website. 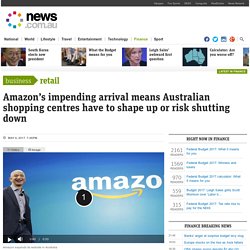 This mall in Ohio is one of many dead shopping centres throughout the US that has closed since the growth of Amazon. Australian shopping centres could go the same way if they don’t innovate. Picture: Johnny Joo/Caters News. SHOPPING centre owners are in fear of the upcoming entry of Amazon to the Australian market — and with good reason. In America the so-called “digital monster” has led to traditional suburban malls failing as they struggle to respond to the changing desires of shoppers. Online retail sales top $20 billion. Online sales exceeded $20 billion for the first time in 2016 as strong domestic growth offset flat sales at offshore retailers and double-digit gains in fashion and takeaway food countered weakness in department stores and daily deals sites. 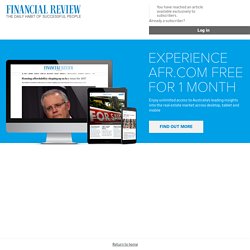 According to the National Australia Bank, online retail sales rose a seasonally adjusted 0.8 per cent in June, down from 2.2 per cent growth in May, but lifting online sales for the year ending June by 13.5 per cent to $20.1 billion. Growth has slowed dramatically since the heady days of 2011, when online retail sales grew more than 30 per cent. However, online spending is growing five times faster than traditional retail spending and now accounts for 6.8 per cent of total bricks and mortar sales of $296.9 billion. NAB Online Retail Sales Index: Indepth report - December 2016. In total, we estimate the Australian online retail market was worth $21.65bn in the 12 months to December 2016. 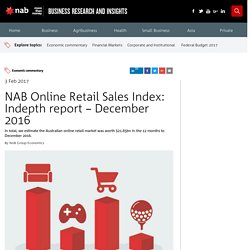 By NAB Group Economics In growth terms, sales slowed in month-on-month (mom) terms to 1.0% in December, seasonally adjusted (s.a.). Homewares and appliances, Electronic games and Toys, Media, Takeaway Food, and daily deals sales grew in the month, partly offset by a contraction in Fashion, Personal and Recreational goods, Department stores and Grocery and Liquor. The state result was equally mixed with gains in ACT, NT, QLD, TAS, and WA offset by falls in VIC, NSW, and SA.

Digital uptake in Australian retail - still early days - Inside Retail. Progress is impossible without change, and those who cannot change their minds cannot change anything. 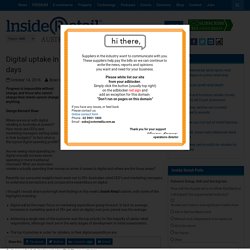 George Bernard Shaw Where are we at with digital retailing in Australia at present? How much are CEOs and marketing managers setting aside in their budgets? In fact what is the typical digital spending profile? Lower dollar does little to stop surge in online sales. Australia's appetite for online shopping is surging - despite a lower Australian dollar - as growth in overseas sales drives the online retail market. 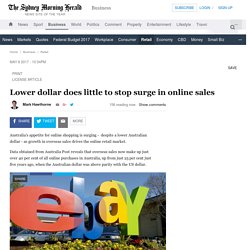 Data obtained from Australia Post reveals that overseas sales now make up just over 40 per cent of all online purchases in Australia, up from just 25 per cent just five years ago, when the Australian dollar was above parity with the US dollar. "What we have found is that the Australian dollar really has very little to do with people's online buying habits," said Ben Franzi, general manager of eCommerce at Australia Post.

Australian retailers are losing the online race - The Drum. Analysis Posted While overseas retailers like Macy's and John Lewis are embracing the rise of online shopping, Australian companies Myer and David Jones have shown reluctance. ABC's Emma Alberici pens an open letter to the company CEOs with a few thoughts. Dear Bernie Brookes (Myer CEO) and Paul Zahra (David Jones CEO), When are you going to admit that you misread the market? According to Roy Morgan Research's State of the Nation report, after a decade of consistent year-on-year growth, internet shopping finally reached mainstream status in the first quarter of 2013. Retail Trends 2017: What is digital’s impact on the retail sector? - Digital Pulse. Facing an increasingly competitive landscape, it is vital for retailers to keep up with evolving technologies and consumer behaviour.

What will 2017 bring? Paul Zahra, Global Retail Adviser and former CEO of David Jones, talks about the retail trends to look out for this year. In the world of retail, 2017 promises to be another exciting year. Customers are, of course, still in the driver’s seat. Their habits, preferences and priorities continue to quickly evolve, a fact which led to 77% of retail CEOs saying they’re concerned about the impact of shifts in consumer spending and behaviour – considerably higher than CEOs in other sectors. In this tough economic environment things will only get harder as retailers expand their global reach and the marketplace becomes more competitive.

Amazon Is Coming To Australia In 2018. Amazon's Australian rollout plans have just been laid out by a former executive of the company - and we finally have a launch date. From next year, Australians will reportedly be able to use the online shopping service to purchase a huge variety of products, including groceries, clothing, electronics and even takeaway food.

Here are all the services Australia will be getting: from fresh food delivery to Amazon Prime Now. Update: A previous version of this story stated that Brittain Ladd was the current global logistics senior manager for Amazon. We have been informed that Ladd is no longer with the company and have amended the article to reflect this. AUSTRALIAN RETAIL SALES MISS. For the first time in four months Australian retail sales have missed expectations, a disappointing outcome given strength in other spending and sentiment indicators. According to the ABS, sales rose by 0.2% to $25.665 billion in November in seasonally adjusted terms, just half the rate that had been expected by economists. It was also a noticeable step down from the 0.6% and 0.5% increases registered in the prior two months. As a result of the weak November result, the annual pace of sales slowed to 3.3%, down from the 3.5% level reported in October.

It now sits at the weakest level seen since August last year. By category, sales of food (0.4%), clothing, footwear and personal accessories (1.7%) and household goods (0.2%) all increased, offsetting declines at cafes, restaurants and takeaway food services (-0.8%), department stores (-0.3%) and other goods (-0.1%). Amazon is coming to Australia with 'low prices, vast selection, and fast delivery'

The Amazon juggernaut is coming to Australia. The company founded by Jeff Bezos confirmed on Thursday its intentions to pursue the retail dollar in Australia in a big way. This is a modal window. This modal can be closed by pressing the Escape key or activating the close button. Caption Settings Dialog Beginning of dialog window. Amazon to launch in Australia, local retailers vow to fight multinational threat. Posted. The Business - 20/4/2017. Retail Sales Worldwide Will Top $22 Trillion This Year.

Retail sales worldwide—including both in-store and internet purchases—will reach $22.492 trillion this year, according to new figures from eMarketer. The global retail market will see steady growth over the next few years, and in 2018, worldwide retail sales will increase 5.5% to reach $28.300 trillion. Herringbone, Rhodes & Beckett join retail carnage. Grocery Infographic. The Changing Role of Retail Stores. A new report from Avanade, a provider of digital cloud services, and EKN Research found that while nearly 80% of retailer professionals worldwide currently believe traditional sales are the primary business function of stores, that will change in the next two to three years.

By 2020, traditional sales activities will fall to the bottom of what retailers expect from stores. As Sales Decline Again, Neiman Marcus Says It Is Exploring a Sale. Company data Neiman Marcus Sales history, real estate holdings, store productivity, credit ratings and more. The Line Between Tech and Retail Blurs Even More. On Monday, Walmart said that it’s launching a tech incubator to invest in robotics, augmented and virtual reality, machine learning, artificial intelligence and other emerging technologies. Upping Its Tech Game, Neiman Marcus Learned a Lesson or Two. The challenge is accepting the idea that along with the technology hits come some misses, too.