Aimia MobileAssistedShopper. Is the death of the high street in sight? Physical retail spaces across the UK are suffering according to the latest footfall survey from the British Retail Consortium. 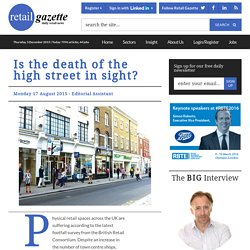 Despite an increase in the number of town centre shops, traffic on the high street has declined. Whatever happened to the reinvention of the UK high street? Andreessen predicts the death of traditional retail. Yes: Absolute death. Yesterday, when I spoke with Marc Andreessen about ShoeDazzle's rapid decline and subsequent rapid turn-around, I asked if he'd seen anything quite so dramatic in the startup world. 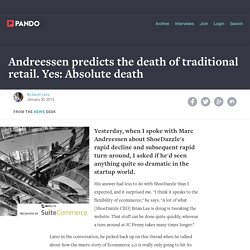 His answer had less to do with ShoeDazzle than I expected, and it surprised me. "I think it speaks to the flexibility of ecommerce," he says. "A lot of what [ShoeDazzle CEO] Brian Lee is doing is tweaking the website. That stuff can be done quite quickly, whereas a turn around at JC Penny takes many times longer. " Topshop takes top spot in fashion omni-channel survey - Fashion - Fashion-news. Retailer Topshop has been named the best omni-channel fashion retailer according to a survey by global management consultancy Kurt Salmon, ahead of John Lewis and Marks & Spencer. 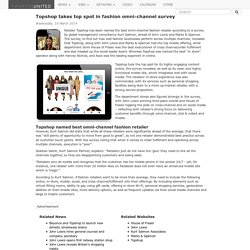 The survey, to find out how well fashion businesses perform across multiple channels, revealed that Topshop, along with John Lewis and Marks & Spencer had the top mobile offering, while department store House of Fraser was the best executioner of cross channel/order fulfilment and also headed up the social leader board. We now spend more than eight hours a day consuming media. Facebook founder Mark Zuckerberg and his wife, Priscilla, announced the birth of their baby daughter Max today (Dec. 1), along with a extensive letter laying out their plan to give away 99% of their Facebook shares during their lifetimes. 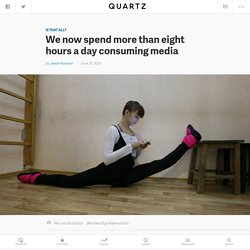 Cracking the digital-shopper genome. An airline sends a regular customer an e-mail about a special promotion on flights from New York City to exotic Caribbean destinations. 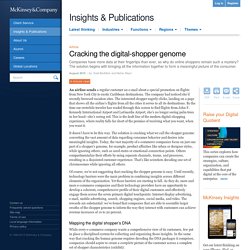 Does Your Brand Have a Customer Experience Strategy? Digital Futurist Brian Solis reveals how brands can navigate the consumer experience economy In 2013, Internet of Things expert and noted author, Brian Solis, released his book, What’s the Future of Business? 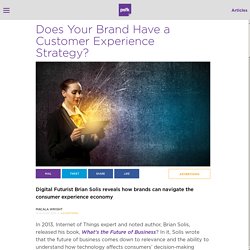 In it, Solis wrote that the future of business comes down to relevance and the ability to understand how technology affects consumers’ decision-making processes. In my 2013 PSFK interview, I wrote that consumers not only expect great brand experiences, but that they also believe they’re entitled to them. Experiences are now directly tied to aspiration and intention, and creativity and technology are merely the enablers. Retailing2015. Welcome. RDV O Globe: The boutique loved by Tokyo fashion insiders. He fashion pack just descended on Tokyo for a whirlwind week of shows, but between catwalks and sidewalks finding a place to sit down and take a moment is a must. 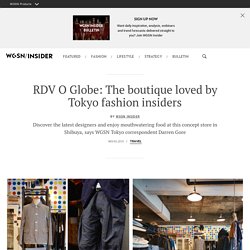 At any one time, an up-and-coming local label might be showing its forthcoming collection, while buyers and brands strike deals over coffee and the affable Maebuchi talks shoppers through his latest designer arrivals from Europe. Pop into this must-visit store on your next trip to Tokyo. City: Tokyo. Tommy Hilfiger Introduces Virtual Reality Headsets for Shoppers. Photo. 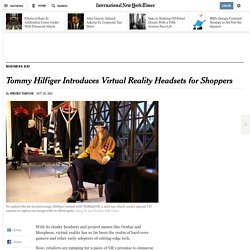 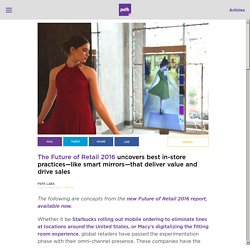 Whether it be Starbucks rolling out mobile ordering to eliminate lines at locations around the United States, or Macy’s digitalizing the fitting room experience, global retailers have passed the experimentation phase with their omni-channel presence. These companies have the capability to innovate within the physical retail space and are taking full advantage of emerging technologies to integrate digital touch points at every stage of their customer experience. Customers are taking notice of these services, from artificial intelligence to on-demand delivery, which are providing them with the tools to be supported from the beginning to the end of their brand journey. 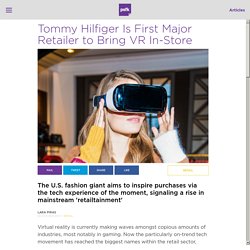 Now the particularly on-trend tech movement has reached the biggest names within the retail sector, starting with Tommy Hilfiger‘s latest phygital concept, an in-store VR experience. Officially launched on 5th Avenue in New York City, shoppers now have the option to watch the Fall 2015 Hilfiger Collection runway show in three-dimensional, 360-degree virtual reality. Uniqlo Takes Over Chicago Transit. The global fashion giant targets commuters by pioneering an immersive experience to spotlight its first store opening in Chitown Uniqlo has pipped its competitors to the post by being the first brand given permission to fully take over a Chicago Transit train, giving passengers a journey of a lifetime. To market its first ever Midwest store in Chicago, Uniqlo partnered with experiential firm Invisible North to create a series of immersive commute experiences.

Starting last month, the takeovers are taking place in and around Chicago Transit Authority’s subway cars. Each of a dedicated five party trains can hold between 300 and 500 guests each. After RSVPing and checking in outside the station, attendees can join the two-car Uniqlo dance party as the train loops around the city.