SoHo Gives a Glimpse of Retail's Future. Walk down Greene Street in Manhattan's SoHo district this week, and you'll get a glimpse of the retail store of the future — two of them, in fact. 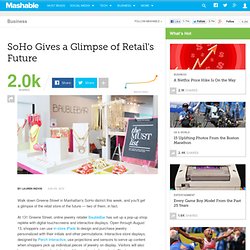 At 131 Greene Street, online jewelry retailer BaubleBar has set up a pop-up shop replete with digital touchscreens and interactive displays. Open through August 13, shoppers can use in-store iPads to design and purchase jewelry personalized with their initials and other permutations. Interactive store displays, designed by Perch Interactive, use projections and sensors to serve up content when shoppers pick up individual pieces of jewelry on display. Visitors will also be encouraged to upload photos of themselves to the web via Olapic. Audi, AT&T, Pep Boys All Look to the Future With Their Brick-and-Mortar Shops. Eighty-five-year-old Chicagoan Martin Shafron, a self-described “computer illiterate,” steps into the rotunda-like entrance of AT&T’s flagship store in the city’s high-end retail district known as the Magnificent Mile. 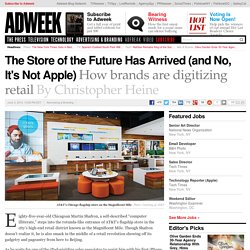 Though Shafron doesn’t realize it, he is also smack in the middle of a retail revolution showing off its gadgetry and pageantry from here to Beijing. As he waits for one of the iPad-wielding sales associates to assist him with his first iPhone, which he’d bought there the day before, Shafron is sprinkled with what AT&T calls “innovation sounds”—perhaps best described as raindrops going pitter-patter on a digital rooftop interspersed with wind chimes producing cyber inharmonic spectra. He, like most who walk through these doors, is seriously wowed by the space, but, he says, “More than anything, I appreciate the hands-on help.” “We want to transform the traditional website experience into the physical experience,” explains Paul Roth, president, retail at AT&T. Digitization. The New Multi-Screen World. Tesco digital pilot brings online experience to in-store shopping. Navigating the complexities of today's technology-driven retail landscape can be tricky. 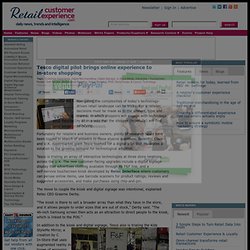 For a retailer, decisions must be made as to the amount, type and manner in which shoppers will engage with technology — all in a way that the shopper (hopefully) will find satisfying. Fortunately for retailers and business owners, plenty of research hours have been logged in search of answers to these elusive questions. Recently, Cisco and U.K. supermarket giant Tesco teamed for a digital pilot that illustrates a solution to the growing demand for technological adoption. Tesco is trialing an array of interactive technologies at three store locations across the U.K. The move to couple the kiosk and digital signage was intentional, explained Retec CEO Graeme Derby.

"The kiosk is there to sell a broader array than what they have in the store, and it allows people to order sizes that are out of stock," Derby said. In addition to the kiosk and digital signage, Tesco also is trialing the Kids StyleMe. Pour les distributeurs : passer à un retail de précision (2/2) Septembre 20th, 2012 Valérie La conférence inaugurale du salon Equipmag a permis à plusieurs experts de la distribution de développer leur vision des évolutions et révolutions attendues dans le retail. 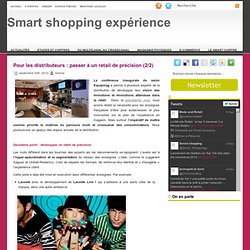 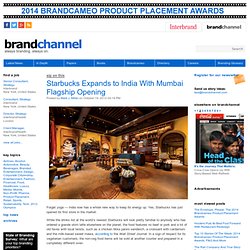 Yes, Starbucks has just opened its first store in the market. While the drinks list at the world’s newest Starbucks will look pretty familiar to anybody who has ordered a grande skim latte elsewhere on the planet, the food features no beef or pork and a lot of old faves with local twists, such as a chicken tikka panini sandwich, a croissant with cardamom and the milk-based sweet mawa, according to the Wall Street Journal. In a sign of respect for its vegetarian customers, the non-veg food items will be sold at another counter and prepared in a completely different oven. The world’s largest coffee chain is expanding into the world’s second-most populated country with the help of India's venerable Tata Group just as revenues in America are slowing, and the number of India’s consumers of coffee is nearly twice what it was a decade ago.

Starbucks could open as many as 50 stores in Mumbai and New Delhi in the first year. Retail news, trends etc (MAPIC) Online retail in Japan: Too late for new entrants? - Aurora. By Brian Salsberg and Yuka Morita This is the first of a series of articles on e-commerce around the world. 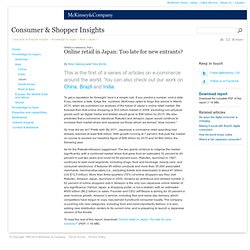 You can also check out our work on China, Brazil and India. To get a reputation for foresight, here’s a simple rule: If you predict a number, omit a date. If you mention a date, fudge the numbers. McKinsey opted to forgo this advice in March 2010, when we published our analysis of the future of Japan’s online retail market. So how did we do? As for the Rakuten/Amazon juggernaut: The two giants continue to outgrow the market significantly, with a combined market share that grew from an estimated 32 percent to 40 percent in just two years and could hit 50 percent soon. To read the rest of this report, download “Online retail in Japan: Too late for new entrants?”