Things to make and do. 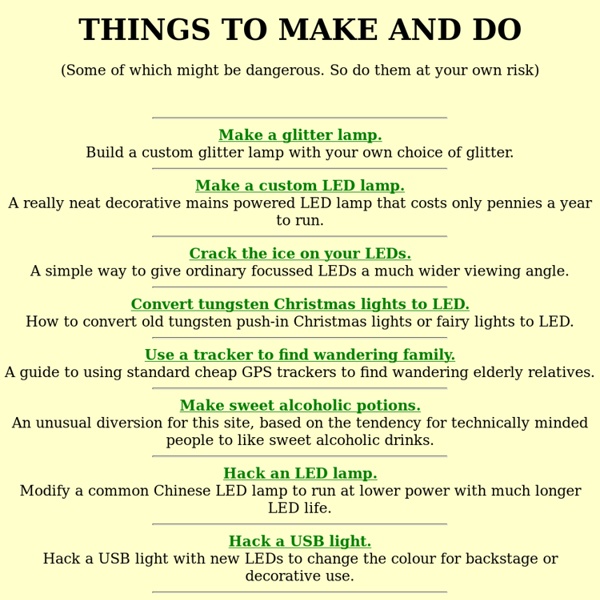 Hack your solar garden lights. Solar garden lights.... How on earth do they manage to sell something with a solar panel, rechargeable battery, step-up converter, LED and the plastic and metal casing for a dollar/pound. You can't even buy the bare components for anywhere near that, in fact the solar panel alone would probably cost you five times the cost of the whole light! This project is about hacking your solar lights to make them different colours and potentially increasing the battery life too.Solar lights are great to hack. Here's the test subject for this project. Inside is a small NiMh cell and a PCB with the LED, a small inductor, a switch and a COB (Chip On Board) which is basically a bare integrated circuit which is stuck to the board, connected and then covered with a blob of black resin. If the LED pads have solder left across the holes then it can be removed with a bit of desoldering braid, which is a fine braided copper wire soaked in resin. And test by turning the light on and covering the solar cell.

Giant asteroid will zoom past Earth, averting apocalypse By Lisa M. Krieger lkrieger@mercurynews.com Posted: 02/07/2013 04:05:02 PM PST0 Comments|Updated: about a year ago An asteroid the size of a 15-story building will zoom past the Earth next week, the closest such flyby in a century and a reminder of the persistent risk of collision. In a different orbit from outer space, the spinning rock, dubbed DA14, could have struck the Earth with a force equivalent to more than 2 million tons of TNT. But instead, it will continue on eight times as fast as a speeding bullet back into deep space, averting calamity and thrilling scientists. "It is a record-close approach for an asteroid of this size," said Donald Yeomans, manager of the Near-Earth Objects Office at NASA's Jet Propulsion Laboratory in Pasadena, in a Thursday morning news conference. This image provided by NASA/JPL-Caltech shows a simulation of asteroid 2012 DA14 approaching from the south as it passes through the Earth-moon system Feb. 15, 2013.

Microsoft Surface Pro Review: The Weirdest Mainstream Laptop You Can Buy The Microsoft Surface Pro is easily the most interesting laptop to cross my desk in the past few years. Not the best, but certainly the ballsiest and most unusual. And it is a laptop; this isn't a tablet, like its confusing sibling, the Surface RT, which looks nearly identical and was released late last year for half the price of this one. Instead it's an experimental ultraportable, like Lenovo's Yoga 13 (our favorite early Windows 8 laptop), which innovates with form and aesthetics while remaining, distinctly, a laptop. What's Good The size, shape, and build quality are all great. The screen is fantastic--not quite as sharp as a retina display on a MacBook Pro, but remember that this machine starts at $900, and the cheapest retina MacBook starts at $1,700. It has minimal ports, but I didn't find that a problem--if you're buying what's probably the smallest and most portable full-figured computer out there, you can't expect it to have six USB ports and five ways to output video.