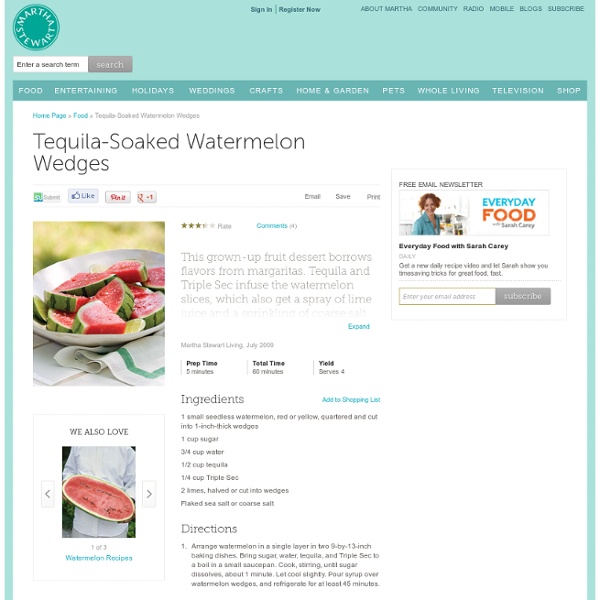 Root Beer Float Cupcakes Awhile back I did one of the darnedest things. You may recall. I made this root beer float. And I’m still trying to decide if it was the best decision of my life, or the catalyst to having nightmares when I envision warm, sandy beaches and waves crashing along the shore. 50 Drinking Games Guaranteed to Get You Hammered What’s more fun than hanging out with your friends, getting plastered, and making an ass of yourself? Playing drinking games, hanging out with your friends, getting plastered, and making an ass of yourself. I’m sure in your years of wisdom and experience, you’ve come across a few drinking games. How to Make Homemade Kahlua. An Easy Coffee Liqueur Recipe In much of the world, Kahlua is sold as a very premium liqueur. Were I to walk to my local wine and liquor store for a bottle of Kahlua I'd pay almost 40$! Which, although I do like an occasional Mexican coffee, is steep indeed… Fortunately, a friend recently showed me the trick to making my own, very Kahlua like, coffee liqueur, and it can be made for a fraction of the cost of the original – I figure it costs me about 6$ a bottle. It is very easy to do, only takes about 10 minutes of active work, and the patience to wait a few weeks to let the flavors meld.

Cake Batter Martinis This has my name alllll over it. I know I just shared a big, fuzzy drink with you yesterday but before you go voting me off the island, hear me out. I.couldn’t.help.it. I teased you about it last week and couldn’t wait another day to share! So here’s the deal. PESTO PIZZA WITH ROASTED GARLIC & POTATOES Mention potatoes on pizza and you’ll get one of two responses. From the folks who’ve tried it, you can expect an enthusiastic thumbs up. From everyonce else: a resounding “huh?” That’s the thing about pizza with potato – it sounds strange, until you try it, and then you just get it.

Alicia’s Awesome Crab Rangoon I invented this recipe many years ago… when I was in high school. I loved eating crab rangoon at Asian restaurants, and of course there were none of those in my hometown of under 1,000. Like a lot of recipes I come up with, this one was invented out of necessity. Mixologist's Recipe: Harry Potter Sorting Shots Harry Potter and the Deathly Hallows Part II is coming out soon and that means reason to celebrate (or mourn) so down a flagon of homemade butterbeer ! Throw back some fire whiskey. As the fandom continues to get older though, there seems to be more of a reason to celebrate in adult ways.

Caramel Apple Jello Shots [With Real Apples] Can you believe I actually spend time trying to figure out what kinds of food could be used as a vessel for jello shots? I'm not a lush I swear ... although my blog would have you totally fooled. It's just that, after filling lemons, limes, oranges and strawberries with vodka infused jello, I knew there had to be something else ... TGI Fry-Day: 'Thrice Cooked Chips' at The Breslin Who doesn't love french fries? We've long been looking for New York's best, and decided that the city's fries deserved more than a post—they needed a column of their own. Here's TGI Fry-Day, your weekly dose of deliciousness. Got a nomination? Let us know. —The Mgmt.

Green Bean Fries A couple of weeks ago I was emailed by a reader to try Green Bean Fries, like the ones at T.G.I. Friday’s. So I went to the source and tried them. They were good, but mine might have been sitting around for a while as they were a little mushy. So I got home, plugged in the deep fryer and started to experiment. Drinking Games Have fun with The Webtender's collection of drinking games, but be extremely careful if you play any these games, especially the ones with high buzz factors. The collection was created as an aid to responsible adults who know their limits (and not to cross them) when it comes to drinking, and not to promote this kind of drinking behavior. You should of course be of legal drinking age if you want to play these games with beer or drinks, but anyone can play these games with non-alcoholic beverages as well. To view an entire collection of Drinking Games and more visit The Webtender: And remember, always drink responsibly! For more awesome games visit The Webtender: Do you Like this?

Strawberry Margarita Jell-O Shots When thinking of Super Bowl foods strawberries don't usually make the cut. However... mix the strawberries with a little tequila and turn them into a margarita and you are getting closer! With our sunny Citrus Blush already mixed and in the pitcher we weren't really in need of another cocktail, but when I came across these cute little shots I couldn't resist putting them on my Super Bowl Extravaganza Table.

Fettucine Carbonara with Roasted Tomatoes — Our Life In The Kitc I’ve been craving Carbonara for a while now but was having a hard time justifying the calories. The willpower was gone when I thought about throwing in some of the surplus cherry tomatoes from the garden. I also planned to make fresh homemade fettucine but I was too lazy busy to get around to it. Enter Plan B.