Hardware store equivalent for Part 105307? - IKEA FANS. Installing MacBook Unibody Model A1342 Trackpad Replacement - Page 2. Homepage - Taskbox. How To Get Around Norton Goback. This topic dates a bit, but I found it relevant when I had to upgrade an older computer recently. 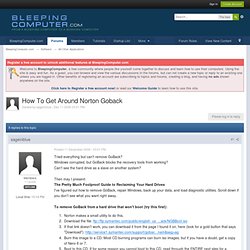 That PC with Windows XP had GoBack installed and active. An image of its 40GB disk was taken, a new 120GB disk installed, and the image restored onto it. Then trouble began. At the first attempt to boot, GoBack complained that the MBR had been modified by an external utility, asked whether to proceed, and when told to do so, crashed, displaying a colorful red and grey error screen. Several attempts to resolve the issue by deactivating GoBack failed and resulted in a system that was unbootable (BSOD, infinite boot loop): the Ctrl-Alt-G method is insufficient, applying a MBR fixing utility does not work properly, uninstalling GoBack after Ctrl-Alt-G and a seemingly successful login did not clean up the system properly and made it unstable. The problem originates in the fact that GoBack modifies the original Windows MBR in addition to keeping some hidden information about the partition. 10 things you can do when Windows XP won't boot.

If your computer powers up okay, but the Windows XP operating system won't boot properly, you have some troubleshooting ahead of you. 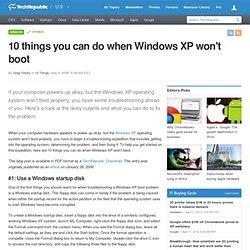 Here's a look at the likely culprits and what you can do to fix the problem. When your computer hardware appears to power up okay, but the Windows XP operating system won't boot properly, you have to begin a troubleshooting expedition that includes getting into the operating system, determining the problem, and then fixing it. To help you get started on this expedition, here are 10 things you can do when Windows XP won't boot. This blog post is available in PDF format as a TechRepublic Download. This entry was originally published as an article on January 26, 2006. #1: Use a Windows startup disk One of the first things you should reach for when troubleshooting a Windows XP boot problem is a Windows startup disk. 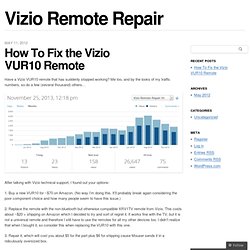 Me too, and by the looks of my traffic numbers, so do a few (several thousand) others… After talking with Vizio technical support, I found out your options: 1. Buy a new VUR10 for ~$70 on Amazon. (No way I’m doing this. 2. 3. If you decide to go with option #3, here are some pictures that may help you. After my remote stopped working I decided to take it apart figuring it was the ribbon cable. Once open, you will likely see a broken ribbon cable as pictured. To remove the broken piece, you’ll need to remove the tape holding the ends into the connectors and then pull on the brown piece of plastic which will slide back and allow you to remove the ribbon, leaving you with this. After this, you’ll need to get a replacement ribbon and just reverse everything you’ve done to this point. For $5.00, or here for $4.45. It’s a 2 inch, 10 conductor, .50mm pitch flat flex ribbon cable – Molex part number 21020-0097.