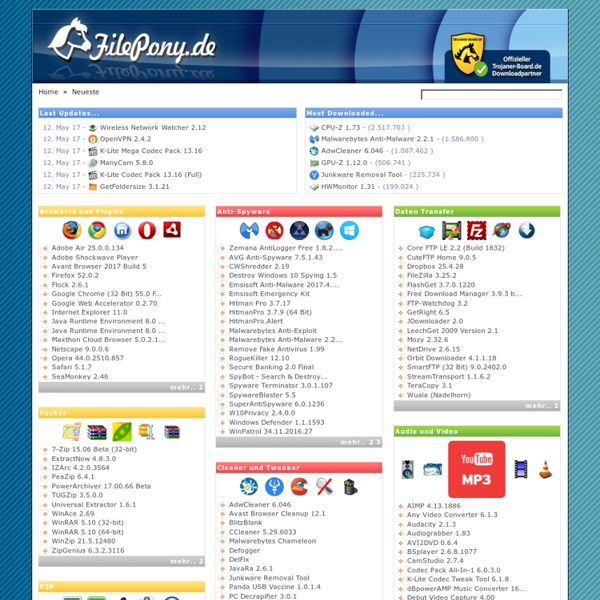 10 Most Useful MS DOS Commands : Use of internet technology in day today life DOS (Disk Operating System) was one of the most usable operating systems during the initial period of personal computer’s emergence into homes and offices. MS-DOS is Microsoft’s version of DOS which is integrated into most of their operating systems, including Windows 8. I will be talking about common DOS commands in this post. Technically speaking, MS-DOS is a command-line operating system that allows you to perform various tasks according to given commands. There is no GUI (Graphical User Interface) here, however it is a lot fun to play. A Massive List Of Free Software Alternatives - Life Hacks After our earlier article showing you how you can still get Windows 10 for free, we got to thinking about freebies. Which led to this question: What are the best free software alternatives to paid applications? So we started to compile a list.

100 Portable Apps for Your USB Stick for Windows and macOS Advertisement Portable apps, as opposed to traditional software, don’t require installation onto a computer. Their entire data set sits nicely in one folder, and terminate completely once closed. Whether you prefer using them for a clean machine or like to carry around a flash drive with loads of programs, portable apps are pretty awesome. Favorite and Forget: 15 Useful Internet Tools Favorite and Forget brings only the best links every day. Mar 7, 2016 15 Useful Internet Tools 1. ultralogout.tk – Log out of many sites at the same time.

Top 10 Password Cracking Tools for all Platforms A simple details about password cracking tools from wiki. In cryptanalysis and computer security, password cracking is the process of recovering passwords from data that have been stored in or transmitted by a computer system. A common approach (brute-force attack) is to try guesses repeatedly for the password and check them against an available cryptographic hash of the password. 21 Windows Shortcuts For Better Windows Experience SkyTechGeek Windows shortcuts are meant to make work more easier and faster, sometimes it nags users when their mice malfunctioned and don’t work, and if they are not aware of the windows shortcuts things go even worse. For rapid access and for smart work users should aware of some exceptional windows shortcuts. STG is sharing the best and easy windows shortcut which will allow users to perform their tasks more easily and specifically and will turn them a smart window user. Some of them are compatible with Windows XP and some aren’t compatible but users can use them in other version of Windows such as Windows XP and later. 1.

Five tools for getting rid of duplicate files Duplicate files and folders can clutter up a user's computer, and they can wreak havoc on collaborative work. Although manually tracking down dupes is hardly practical, a number of specialized tools can handle the task. Note: This list is also available as a photo gallery. FREE Software Round-Up 2016 Image Editing Pixlr – Fully functional alternative to Adobe Photoshop. (Web, Windows, Mac)GIMP – Another Photoshop alternative. Is your VPN Legit or Shit? Those of you who frequent the darkweb should be familiar with VPN (Virtual Private Network) services and have done some research to find a trustworthy provider. For readers who are just starting to explore the darker catacombs of the Internet a VPN is a mandatory tool for online anonymity. But not all VPN services are created equal. >>>Click for DeepDotWeb’s Chart of Best VPN services<<< For n00bs A VPN provides a secure connection between your computer and the VPN servers.

21 Awesome (But Lesser-Known) Open-Source Applications for Windows Unless you’ve been hiding under a rock in Madagascar for the last few years, you undoubtedly already know about the All-Star open-source applications for Windows. I’m talking about applications such as Firefox, Thunderbird, GIMP, OpenOffice, and VLC. However, there are hundreds of lesser-known but highly-useful open-source applications available for Windows. 11 wonderful websites that'll keep you happy for hours Have you run out of fun websites to browse while procrastinating? Sometimes the most entertaining and amusing sites are the ones that few people know about. We’ve decided to share our finest selection of obscure procrastination material, ranging from small sites for a quick break to incredibly immersive sites where you might spend hours.