Teams, News, Standings, Scores & Stats. Italy News and Scores. Live Science: Scientific News, Articles and Current Events. History of Pizza. There are not many nations that can say their national dish has become an international phenomenon. 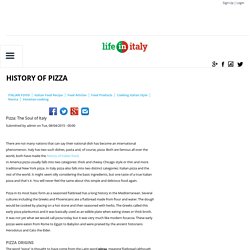 Italy has two such dishes, pasta and, of course, pizza. Both are famous all over the world, both have made the history of Italian food. In America pizza usually falls into two categories: thick and cheesy Chicago style or thin and more traditional New York pizza. In Italy pizza also falls into two distinct categories: Italian pizza and the rest of the world. It might seem silly considering the basic ingredients, but one taste of a true Italian pizza and that's it. Pizza in its most basic form as a seasoned flatbread has a long history in the Mediterranean. Pizza Origins The word "pizza" is thought to have come from the Latin word pinsa, meaning flatbread (although there is much debate about the origin of the word).

A legend suggests that Roman soldiers gained a taste for Jewish Matzoth while stationed in Roman occupied Palestine and developed a similar food after returning home. Leonardos Engineers.mov. The Helicopter » Leonardo Da Vinci's Inventions. Leonardo da vinci helicopter Hi Guys, before reading the post, we would like to let you know about a project that we are currently working on in conjunction with our sister website EpicPhysics.com. 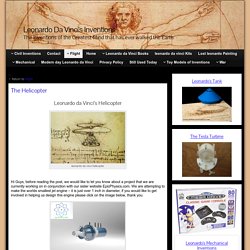 We are attempting to make the worlds smallest jet engine – it is just over 1 inch in diameter, if you would like to get involved in helping us design this engine please click on the image below, thank you. Leonardo da Vinci’s helicopter is a world renowned example of his ability to think centuries ahead of his time. It is the first known drawing of any helicopter-like machine.

Nikola Tesla’s Turbine The ancient Chinese had designs for lighter than air flight, such as hot air balloons and even some wild firework powered machines (some of which are believed to have been tested resulting in the death of the pilot) but nothing similar to a helicopter. The design was drawn in 1493, 450 years earlier than an actual helicopter would take to the air. The closest thing that we have to Leonardo’s. Leonardo da Vinci's Aerial Screw Invention. Though the first actual helicopter wasn’t built until the 1940s, it is believed that Leonardo da Vinci’s sketches from the late fifteenth century were the predecessor to the modern day flying machine. 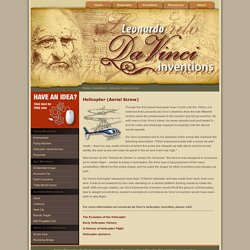 As with many of da Vinci’s ideas, he never actually built and tested it – but his notes and drawings mapped out exactly how the device would operate. Da Vinci scrawled next to his sketches of the screw-like machine the following description: "If this instrument made with a screw be well made – that is to say, made of linen of which the pores are stopped up with starch and be turned swiftly, the said screw will make its spiral in the air and it will rise high.

" Also known as the "Helical Air Screw" or simply the "airscrew", the device was designed to compress air to obtain flight – similar to today’s helicopters. Da Vinci was a big proponent of the many possibilities offered by the screw shape, and he used the shape for other inventions and designs as well. Michelangelo:Paintings,Sculptures,Biography of Michelangelo. 10 Best Pizzerias in Italy. Michelangelo - Painter, Architect, Poet, Sculptor. Michelangelo is widely regarded as the most famous artist of the Italian Renaissance. 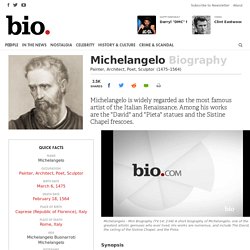 Among his works are the "David" and "Pieta" statues and the Sistine Chapel frescoes. Synopsis Michelangelo was born on March 6, 1475, in Caprese, Italy. Born to a family of moderate means in the banking business, Michelangelo became an apprentice to a painter before studying in the sculpture gardens of the powerful Medici family. What followed was a remarkable career as an artist in the Italian Renaissance, recognized in his own time for his artistic virtuosity. Early Life. History of Pizza. Serie A 2015/2016 live scores, results, Soccer Italy - FlashScore. Italian Sports. Sports are an essential aspect of Italian lifestyle. 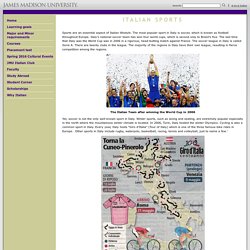 The most popular sport in Italy is soccer, which is known as football throughout Europe. Italy’s national soccer team has won four world cups, which is second only to Brazil’s five. The last time that Italy was the World Cup was in 2006 in a rigorous, head-butting match against France.