Travel - The Japanese skill copied by the world. As the sleek shinkansen bullet train glided noiselessly into the station, I watched a strange ritual begin. 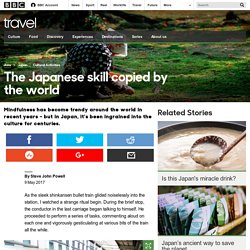 During the brief stop, the conductor in the last carriage began talking to himself. He proceeded to perform a series of tasks, commenting aloud on each one and vigorously gesticulating at various bits of the train all the while. So what was he up to? You could say he’s practicing mindfulness. The Japanese call it shisa kanko (literally ‘checking and calling’), an error-prevention drill that railway employees here have been using for more than 100 years.

And it seems to work. Mindfulness is moment-to-moment awareness. This may seem a long way from mindfulness, which in recent years has become synonymous with what the Japanese call zazen – meditating cross-legged on a cushion. And this present-moment awareness has been deeply ingrained into the Japanese psyche for centuries. This moment with this person in this place will never happen again. An old ponda frog jumpsthe sound of water. Découvrez Google Drive : tous vos fichiers au même endroit. Into The Wild - Bar scene with Vince Vaughn (best scene) PHILOSOPHY - Metaphysics: Problem of Free Will. Key & Peele - Hoodie. Capture: David Kessler's Unified Theory on Mental Health - The Atlantic. Las respuestas de estos jóvenes con cáncer os va a cambiar el modo de ver la vida.

Gmail – bezpłatne miejsce na dane i poczta e-mail od Google. Ratatouille_Anton Ego.avi. Don’t Follow Your Passion, Follow Your Contribution. By Fiona Mares Yes, notebooks are an easy place to capture ideas inspired by everyday life, no matter where you are. 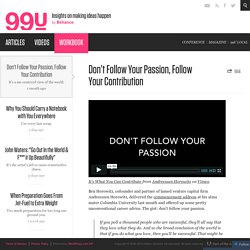 More importantly though, if you begin to review the daily notes or doodles left in your notebook, you will begin to find trends and themes within your smaller ideas that can be brought together and refined. Being able to connect the dots on the patterns between your work and your life can lead to work you had never considered a possibility before. In an interview with Stussy, Lyons discloses he has always doodled monsters but it wasn’t until his daughter refused to eat her school lunches before they were really developed. He would include daily notes in her meal with monsters saying crazy things like, “Eat your eggs or I’ll break your legs.” When you detect these patterns, you can start gathering these bits and pieces and turn them into something bigger and more substantial. The first step: Always carry a notebook. No matter what I’m doing, I’m not an artist. Is 'Follow Your Passion' A Good Idea Or Dumb Advice?

Whistling While You Work: The 10 Most Satisfying Careers. InShare11 By Andrew Strieber Bored at work? 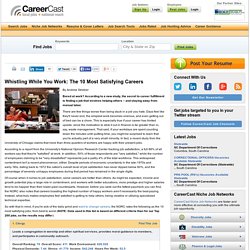 According to a new study, the secret to career fulfillment is finding a job that involves helping others – and staying away from manual labor. There are few things worse than being stuck in a job you hate. Days feel like they'll never end, the simplest work becomes onerous, and even getting out of bed can be a chore. According to a report from the University's National Opinion Research Center tracking job satisfaction, a full 88% of all workers say that they're "satisfied" at work. Of course when it comes to job satisfaction, some careers are better than others. So with that in mind, if you're sick of the daily grind and want to change careers, the NORC rates the following as the 10 most satisfying jobs, from best to worst (NOTE: Data used in this list is based on different criteria than for our Top 200 jobs, so the results may differ): Find This Job1.