Antigonus. Www.ancient. Antigonus I Monophthalmus ("the One-Eyed") (382 -301 BCE) was one of the successor kings to Alexander the Great, controlling Macedonia and Greece. 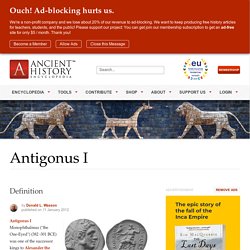 When Alexander the Great died in 323 BCE, a debate ensued over his massive kingdom stretching from Greece to India. It was eventually divided among three of his most loyal generals and their families -- Ptolemy I and his descendants (among them Queen Cleopatra) would rule Egypt; Seleucos and his family ruled Syria and the Near Eastern provinces, and lastly, the descendants of Antigonus ruled Macedonia and Greece. En.m.wikipedia. Antigonus (Ancient Greek: Ἀντίγονος), a Greek name meaning "comparable to his father" or "worthy of his father", may refer to: Rulers[edit] Three Macedonian kings of the Antigonid dynasty that succeeded Alexander the Great in Asia: Antigonus II Mattathias (died 37 BC), the last ruler of the Hasmonean kingdom of Judea Military leaders[edit] 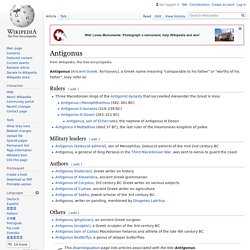 En.m.wikipedia. Biography[edit] Career[edit] Antigonus was appointed governor of Greater Phrygia in 333 BC. 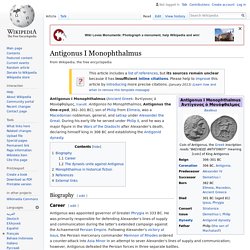 He was primarily responsible for defending Alexander's lines of supply and communication during the latter's extended campaign against the Achaemenid Persian Empire. Following Alexander's victory at Issus, the Persian mercenary commander Memnon of Rhodes ordered a counter-attack into Asia Minor in an attempt to sever Alexander's lines of supply and communication; however, Antigonus defeated the Persian forces in three separate battles. Antigonus I Monophthalmus. Dandamis character from plutarch. Alexander%20the%20Great%20according%20to%20Plutarch. (died 323 B.C.E.) 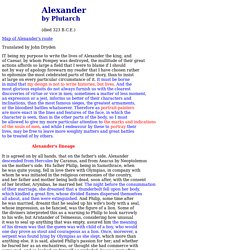 Map of Alexander's route Translated by John Dryden IT being my purpose to write the lives of Alexander the king, and of Caesar, by whom Pompey was destroyed, the multitude of their great actions affords so large a field that I were to blame if I should not by way of apology forewarn my reader that I have chosen rather to epitomize the most celebrated parts of their story, than to insist at large on every particular circumstance of it. It must be borne in mind that my design is not to write histories, but lives. And the most glorious exploits do not always furnish us with the clearest discoveries of virtue or vice in men; sometimes a matter of less moment, an expression or a jest, informs us better of their characters and inclinations, than the most famous sieges, the greatest armaments, or the bloodiest battles whatsoever. Alexander's lineage Alexander's horse Conflict with Philip. Montaigne hindu sage. Dandamis. 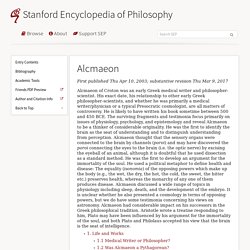 Alcmaeon, son of Peirithous (otherwise unknown), lived in the Greek city of Croton on the instep of the boot of Italy. Diogenes Laertius, in his brief life of Alcmaeon (VIII. 83), asserts that he wrote mostly on medical matters. There is, however, little direct evidence for his work as a practicing physician. Later writers in the medical tradition, such as Galen (DK A2), treat him as a philosopher-scientist rather than as a physician, so that some scholars (Mansfeld 1975; cf. Www.researchgate. Hekint. Steph Magowan Royal Holloway, University of London Alcmaeon of Croton remains one of the lesser known Presocratic writers, not only because of the sparse nature of his extant work but also because of his fragmentary treatment in modern scholarship. 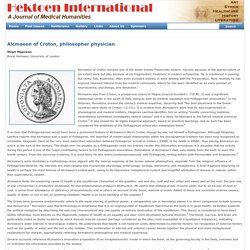 He is mentioned in passing but rarely fully examined, often even excluded entirely in work dealing with the Presocratics. More recently he has enjoyed renewed interest from the medical community, where he has been identified as an early pioneer of neuroscience, psychology, and dissection.1 Alcmaeon was from Croton, a prosperous colony in Magna Graecia founded c. 710 BC.

Www.encyclopedia. Alcmaeon of Croton (a Greek city-state in southern Italy) was a pioneer in the study of human psychology and physiology. 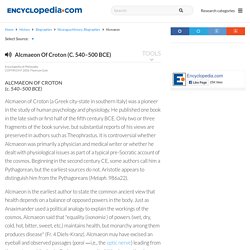 He published one book in the late sixth or first half of the fifth century BCE. Only two or three fragments of the book survive, but substantial reports of his views are preserved in authors such as Theophrastus. It is controversial whether Alcmaeon was primarily a physician and medical writer or whether he dealt with physiological issues as part of a typical pre-Socratic account of the cosmos. Beginning in the second century CE, some authors call him a Pythagorean, but the earliest sources do not.

En.m.wikipedia. Bronze medal devoted to Alcmaeon of Croton Alcmaeon of Croton (in Magna Graecia) (/ælkˈmiːən/; Greek: Ἀλκμαίων ὁ Κροτωνιάτης, Alkmaiōn, gen.: Ἀλκμαίωνος; 5th century BC) has been described as one of the most eminent natural philosophers and medical theorists of antiquity. 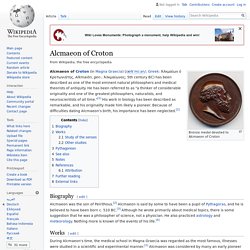 He has been referred to as "a thinker of considerable originality and one of the greatest philosophers, naturalists, and neuroscientists of all time. "[1] His work in biology has been described as remarkable, and his originality made him likely a pioneer. Because of difficulties dating Alcmaeon's birth, his importance has been neglected.[2] Plato.stanford. Alcmaeon of Croton. En.m.wikipedia. Erasistratus (/ˌɛrəˈsɪstrətəs/; Greek: Ἐρασίστρατος; c. 304 – c. 250 BC) was a Greek anatomist and royal physician under Seleucus I Nicator of Syria. 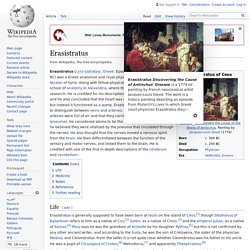 Along with fellow physician Herophilus, he founded a school of anatomy in Alexandria, where they carried out anatomical research. He is credited for his description of the valves of the heart, and he also concluded that the heart was not the center of sensations, but instead it functioned as a pump. Erasistratus was among the first to distinguish between veins and arteries. He believed that the arteries were full of air and that they carried the "animal spirit" (pneuma). He considered atoms to be the essential body element, and he believed they were vitalized by the pneuma that circulated through the nerves. Life[edit] He lived for some time at the court of Seleucus I Nicator, where he acquired great reputation by discovering the disease of Antiochus I Soter, the king's eldest son, probably 294 BC. Medicine[edit] Notes[edit] Www.britannica. Erasistratus Of Ceos, (flourished c. 250 bc), Greek anatomist and physician in Alexandria, regarded by some as the founder of physiology. 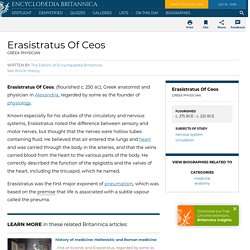 Known especially for his studies of the circulatory and nervous systems, Erasistratus noted the difference between sensory and motor nerves, but thought that the nerves were hollow tubes containing fluid. The-neurology-of-erasistratus-2329-6895.1000111. Visit for more related articles at Journal of Neurological Disorders Abstract Erasistratus was born c. 325 B.C. on the island of Ceos (Chios), and died c. 250 B.C.

He is remembered for his discoveries especially in physiology which were based on human and animal dissections and experiments. Www.squaducation. One of the first Greek doctors to carry out the dissection of a human body was Herophilus; he was born two hundred and fifty years before Christ, which just shows how long we doctors have been discovering new things. According to Herophilus, his most important discovery was that the brain controlled the body not the heart. Well, we all know that the heart is the source of the body’s innate heat and is the organ most closely related to the soul.

Herophilus later discovered there is a difference between arteries and nerves, and that there are different parts to the stomach such as the duodenum and the prostate. There was another Greek doctor Erasistratus who, when dissecting a heart, noticed it had four one-way valves, and this led him to believe that the human heart was some kind of a pump, now how silly is that? Erasistratus didn’t even believe in the four humours, and let’s face it, if you can’t balance a patient’s four humours how can you possibly hope to cure them of illness?

Herophilus: The Art of Medicine in Early Alexandria: Edition, Translation ... - Heinrich von Staden, Herophilus, Herophilus Chalcedonius - Google Books. En.m.wikipedia. Herophilos (/hɪˈrɒfɪləs/; Greek: Ἡρόφιλος; 335–280 BC), sometimes Latinised Herophilus, was a Greek physician deemed to be the first anatomist. Born in Chalcedon, he spent the majority of his life in Alexandria. He was the first scientist to systematically perform scientific dissections of human cadavers. He recorded his findings in over nine works, which are now all lost. Www.britannica. Herophilus, (born c. 335 bc, Chalcedon, Bithynia—died c. 280), Alexandrian physician who was an early performer of public dissections on human cadavers; and often called the father of anatomy. As a member of the well-known scholastic community in the newly founded city of Alexandria during the single, brief period in Greek medical history when the ban on human dissection was lifted, Herophilus studied the ventricles (cavities) of the brain, the organ he regarded as the centre of the nervous system; traced the sinuses of the dura mater (the tough membrane covering the brain) to their junction, known as the torcular Herophili; and classified the nerve trunks—distinguishing them from tendons and blood vessels—as motor or sensory.

He rendered careful accounts of the eye, liver, salivary glands, pancreas, and genital organs of both sexes. Erasistratus. Herophilos. 1497. Avertissement de redirection. Hadrian. Apuleius. Tibullus. Petrarch. Philitas of Cos. Juvenal. Propertius. Sextus Propertius was a Latin elegiac poet of the Augustan age. He was born around 50–45 BC in Assisium and died shortly after 15 BC.[1] Propertius' surviving work comprises four books of Elegies (Elegiae). He was a friend of the poets Gallus and Virgil and, with them, had as his patron Maecenas and, through Maecenas, the emperor Augustus. Although Propertius was not as renowned in his own time as other Latin elegists,[2] he is today regarded by scholars as a major poet.[3][4] Life[edit] Very little information is known about Propertius outside of his own writing. During Propertius' childhood, his father died and the family lost land as part of a confiscation,[8] probably the same one which reduced Virgil's estates when Octavian allotted lands to his veterans in 41 BC.

Mehmed the Conqueror. Ottoman sultan. Mohammed II. Mohammed II may refer to: Mehmed ii. Atomism. Suetonius. Francis I of France. Dionysius I of Syracuse. Agesilaus II. Erasmus. Dutch Renaissance humanist, philosopher, Catholic priest and theologian (1466-1536) Desiderius Erasmus Roterodamus (; English: Erasmus of Rotterdam;[note 1] 28 October 1469 – 12 July 1536) was a Dutch philosopher and Christian scholar who is widely considered to have been one of the greatest scholars of the northern Renaissance.[2][3][4] As a Catholic priest, Erasmus was an important figure in classical scholarship who wrote in a pure Latin style.