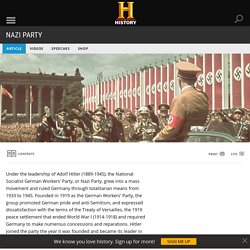 Founded earlier that same year by a small group of men including locksmith Anton Drexler (1884-1942) and journalist Karl Harrer (1890-1926), the party promoted German nationalism and anti-Semitism, and felt that the Treaty of Versailles, the peace settlement that ended the war, was extremely unjust to Germany by burdening it with reparations it could never pay. Hitler soon emerged as a charismatic public speaker and began attracting new members with speeches blaming Jews and Marxists for Germany’s problems and espousing extreme nationalism and the concept of an Aryan “master race.” Germany, a world leader in technology, engineering and innovation. Few countries have contributed so much to science and technology as Germany. 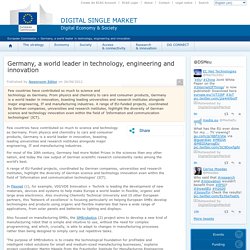 From physics and chemistry to cars and consumer products, Germany is a world leader in innovation, boasting leading universities and research institutes alongside major engineering, IT and manufacturing industries. Germany's role in the world: Will Germany now take centre stage? Adolf Hitler - World War II. To avoid being arrested for evading military service in Austria-Hungary, Adolf Hitler left Vienna for Munich in May 1913 but was forced to return–then he failed the physical. 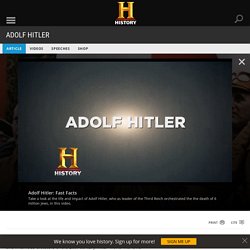 He volunteered for the Bavarian army the following year and served during all of World War I on the Western Front. His experiences in the fighting affected his thinking about war thereafter. After World War I, Hitler came to control the National Socialist German Workers Party, which he hoped to lead to power in Germany. When a coup attempt in 1923 failed, he turned, after release from jail, to the buildup of the party to seize power by means that were at least outwardly legal. He hoped to carry out a program calling for the restructuring of Germany on a racist basis so that it could win a series of wars to expand the German people’s living space until they dominated and exclusively inhabited the globe. Once Hitler had come to power in 1933, German military preparations were made for these wars. Without German bank accounts, refugees are stuck in limbo. All the benefits of a standard digital subscription plus: ePaper - the digital replica of the printed newspaper Full access to Lex - our agenda setting daily commentary Exclusive emails, including a weekly correspondence from our editor, Lionel Barber Full access to EM Squared - data-driven news and analysis service on emerging markets Unlimited access to all FT.com articles and blogs on desktop, mobile and tablet access Personalised email briefings by industry, columnist or sector Portfolio tools to help you manage your investments Fast FT - market-moving news and views, 24 hours a day For 4 weeks receive unlimited Premium digital access to the FT's trusted, award-winning business news * Terms and conditions apply Other subscription options. 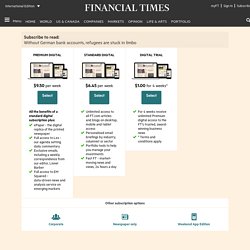 Police arrested three refugees from Pakistan at the scene after three of the women immediately reported their attacks. The sexual assaults are reported to have taken place at the Schlossgrabenfest music festival in the city of Darmstadt, near Frankfurt, on Saturday night. Three of the women immediately alerted police at the festival that they had been assaulted. They said they had been surrounded and then sexually harassed by a group of men who were of South Asian appearance. “Unfortunately several women were sexually harassed on Saturday, when the dance floor area was completely packed,” the police said in a statement, as cited by Die Welt. Read more However, due to the quick intervention by the law enforcement officers, they were able to apprehend three suspects, who are asylum seekers from Pakistan and aged between 28 and 31.

Migrant Crisis: Changing attitudes of a German city. "When the first refugees arrived here in Oberhausen we had a big welcome culture, this has calmed down," says Joerg Fischer, manager of a Red Cross refugee transit camp in Oberhausen in Germany. 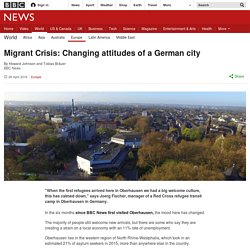 In the six months since BBC News first visited Oberhausen, the mood here has changed. The majority of people still welcome new arrivals, but there are some who say they are creating a strain on a local economy with an 11% rate of unemployment. What is Germany’s role within the EU? The prolonged Greek debt crisis and the ongoing influx of refugees into Europe have ignited a debate about Germany’s role within the European Union. 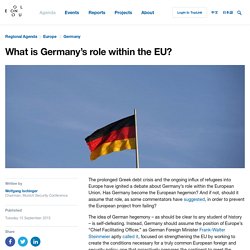 Has Germany become the European hegemon? And if not, should it assume that role, as some commentators have suggested, in order to prevent the European project from failing? ‎ The idea of German hegemony – as should be clear to any student of history – is self-defeating. Instead, Germany should assume the position of Europe’s “Chief Facilitating Officer,” as German Foreign Minister Frank-Walter Steinmeier aptly called it, focused on strengthening the EU by working to create the conditions necessary for a truly common European foreign and security policy, one that proactively prepares the continent to meet the challenges it confronts. By throwing its full weight into this task, Germany would not only promote Europe’s influence in the world; it would also deflate the discussion of hegemony. Unfortunately, this is far from established practice. Refugee reaction? Extremist violence ‘explodes’ in Germany in 2015, far-right crimes spike by third. 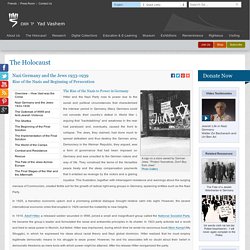