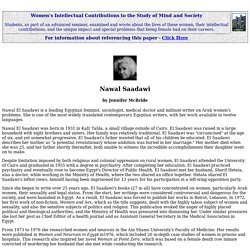 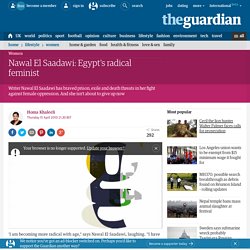 "I have noticed that writers, when they are old, become milder. But for me it is the opposite. Age makes me more angry. " This is a startling admission. It is hard to imagine how El Saadawi – the Egyptian writer, activist and one of the leading feminists of her generation – could become more radical. El Saadawi already seems to have lived more lives than most. This has come at considerable cost. Her work continues to be explosive. As El Saadawi prepares to talk about her life at a PEN literary festival on Friday, she is unrepentant. El Saadawi is "a novelist first, a novelist second, a novelist third", she says, but it is feminism that unites her work.

She says she has been a feminist "since I was a child. In her first autobiography, A Daughter of Isis, she recalls her outrage when she began to realise daughters were not considered equal to sons. In that same book she writes about the horror of female circumcision. Nawal El Saadawi: 'I am going to carry on this fight for ever' - Profiles - People. "I lay in a pool of blood. 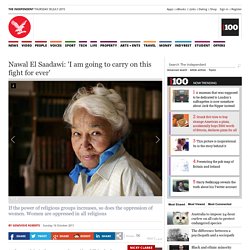 After a few days, the bleeding stopped, and the daya [midwife] peered between my thighs and said, 'All is well. The wound has healed, thanks be to God.' But the pain was there, like an abscess in my flesh. " The Books of Nawal El Saadawi. In a Talk of the Town piece in this week’s issue, I report on Nawal El Saadawi—feminist, writer, dissident, octogenarian—and her efforts to unite Egyptian women of all ages in a post-Mubarak Egypt. 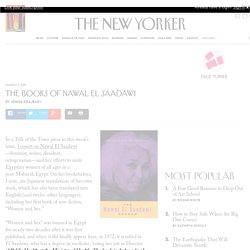 On her bookshelves, I note, are Japanese translations of her own work, which has also been translated into English (and twelve other languages), including her first book of non-fiction, “Women and Sex.” “Women and Sex” was banned in Egypt for nearly two decades after it was first published, and when it did finally appear here, in 1972, it resulted in El Saadawi, who has a degree in medicine, losing her job as Director of Public Health at the Ministry of Health. 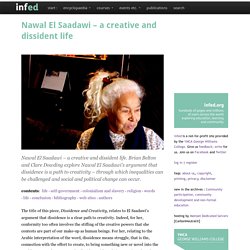 Brian Belton and Clare Dowding explore Nawal El Saadawi’s argument that dissidence is a path to creativity – through which inequalities can be challenged and social and political change can occur. contents: life · self-government · colonialism and slavery · religion · words · life · conclusion · bibliography · web sites · authors The title of this piece, Dissidence and Creativity, relates to El Saadawi’s argument that dissidence is a clear path to creativity. Indeed, for her, conformity too often involves the stifling of the creative powers that she contests are part of our make-up as human beings. For her, relating to the Arabic interpretation of the word, dissidence means struggle, that is the, connection with the effort to create, to bring something new or novel into the world. Can I have the passion and knowledge required to change the powerful oppressive system of family and government without being creative? 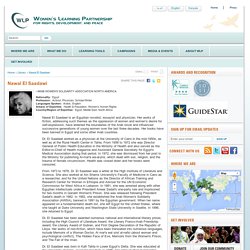 Her works of fiction, addressing such themes as the oppression of women and women’s desire for self-expression, have widened the boundaries of the Arab novel and influenced successive generations of young women over the last three decades. Her books have been banned in Egypt and some other Arab countries. Dr. El Saadawi worked as a physician at the University of Cairo in the mid-1950s, as well as at the Rural Health Center in Tahla. From 1958 to 1972 she was Director General of Public Health Education in the Ministry of Health and also served as the Editor-in-Chief of Health magazine and Assistant General Secretary for Egypt's Medical Association during that period. From 1973 to 1978, Dr. Dr. Dr. Nawal El Saadawi is a leading Egyptian feminist, sociologist, medical doctor and militant writer on Arab women's problems. Siballweg@airfrance.fr Rorubin@ibm.net The Vile News Network (WGOD-VNN) Sponsored by the Group of Decedents A little about our guest: 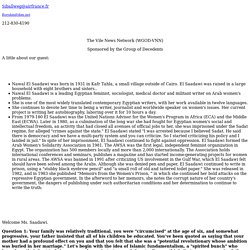