Record El Niño set to cause hunger for 10 million poorest, Oxfam warns. At least 10 million of the world’s poorest people are set to go hungry this year because of failing crops caused by one of the strongest El Niño climatic events on record, Oxfam has warned. 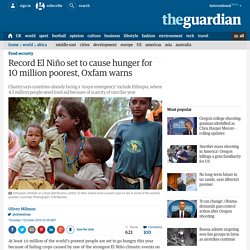 The charity said several countries were already facing a “major emergency”, such as Ethiopia, where 4.5 million are in need of food aid because of a prolonged scarcity of rain this year. Floods, followed by drought, have slashed Malawi’s maize production by more than a quarter, farmers in central America have suffered from two years of drought and El Niño conditions have already reduced the Asian monsoon over India, potentially triggering a wider drought across the east of the continent. Indonesia’s government has declared drought in 34 of the country’s provinces because of El Niño, while 2 million people in Papua New Guinea have been affected by crops shrivelling in heat in some parts of the country and severe frosts in its highlands.

“We can’t keep just patching up communities,” she said. El Niño takes toll on US rice farmers – and points to even higher prices. Blame El Niño. 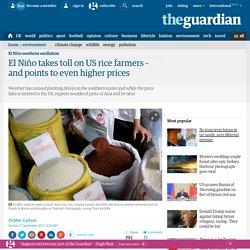 The weather phenomenon is causing havoc for US rice farmers and a sharp price spike in the world’s most important staple food may foreshadow possibly higher prices in Asia in the coming months. While other commodities have hit recent lows, US rice futures prices are up nearly 40%, to about $12.90 per hundredweight, their highest level since August 2014. In sharp contrast, soybean and cotton prices are at their lowest level since early 2009, while sugar prices are just off their lowest levels since 2008.

And matters are likely to get worse. The latest El Niño pattern is cheering some in drought-ridden California where it promises some much needed rain and snow. So far the price rally is limited to US rice prices, as Asian prices are still reflecting a large overhang in supplies, largely because of the former Thai government stockpiling rice – as much as a three-year supply, said Jack Scoville, vice-president at Price Futures Group, under a vote-buying scheme. El Nino - What is it? Global Patterns - El Niño-Southern Oscillation (ENSO) Research conducted at the SCO indicates more storms and increased winter precipitation for the southeast during El Niño events. 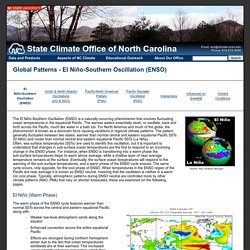 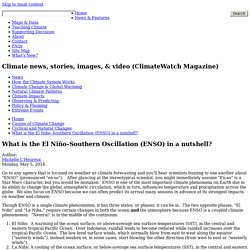 After glancing at the stereotypical scientist, you might immediately assume “En-so” is a Star Wars character, but you would be mistaken. ENSO is one of the most important climate phenomena on Earth due to its ability to change the global atmospheric circulation, which in turn, influences temperature and precipitation across the globe. We also focus on ENSO because we can often predict its arrival many seasons in advance of its strongest impacts on weather and climate. Though ENSO is a single climate phenomenon, it has three states, or phases, it can be in. The two opposite phases, “El Niño” and “La Niña,” require certain changes in both the ocean and the atmosphere because ENSO is a coupled climate phenomenon. But, if you just want to keep things simple, then watch Chris Farley play El Niño on Saturday Night Live. Climate Glossary - El Niño. El Niño is the negative phase of the El Niño-Southern Oscillation. 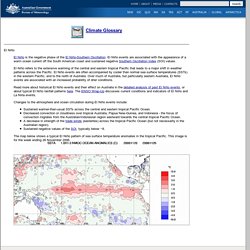 El Niño events are associated with the appearance of a warm ocean current off the South American coast and sustained negative Southern Oscillation Index (SOI) values. El Niño refers to the extensive warming of the central and eastern tropical Pacific that leads to a major shift in weather patterns across the Pacific. El Niño events are often accompanied by cooler than normal sea surface temperatures (SSTs) in the western Pacific, and to the north of Australia. Over much of Australia, but particularly eastern Australia, El Niño events are associated with an increased probability of drier conditions.