FLORIDA MORATORIUM TOUR. Bill is a retired steelworker from Bethlehem Steel, in NW Indiana. Bill became an abolitionist after a fifteen year old girl by the name of Paula Cooper was sentenced to death by the State of Indiana for the murder of his grandmother. Bill was involved in an international effort to have Paula's death sentenced overturned. Bill Pelke is the President and Cofounder of the Journey of Hope...From Violence to Healing, an organization that is led by murder victims families who oppose the death penalty.

Bill has traveled around the world for the last thirteen years speaking out for the abolition of the death penalty. He is also a member of the Board of the National Coalition to Abolish the Death Penalty, Vice President of Alaskans Against the Death Penalty, a founding board member of Murder Victims Families for Reconciliation and on the advisory board for Citizens United for Alternatives to the Death Penalty. July 11, 1986 was the sentencing hearing for Paula Cooper. November 2, 1986. Ex-death row inmate Paula Cooper dead of apparent suicide. Paula Cooper found dead of self-inflicted gunshot wound in IndianapolisSentenced to death in 1986 at 16 after confessing to stabbing 78-year-oldEnraged human rights activists and Pope John Paul II made clemency pleaCooper's death sentence was commuted to prison term by Supreme Court She was released about two years ago after spending 28 years behind bars By Daily Mail Reporter and Associated Press Published: 19:28 GMT, 26 May 2015 | Updated: 14:30 GMT, 29 May 2015. 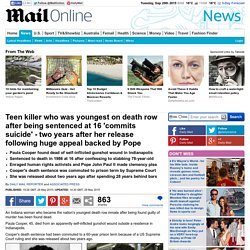 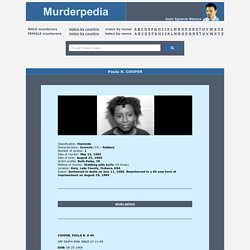 Cooper then knocked her to the floor from behind, struck her with a vase, cut her arms and legs, then stabbed her in the chest and stomach 33 times. Cooper and the other girls searched the house for money. Conviction: Pled Guilty to Murder and Felony-Murder without Plea Agreement Sentencing: July 11, 1986 (Death Sentence) Aggravating Circumstances: b(1) Robbery.

Paula Cooper Release: Ind. woman sentenced to death at 16 to leave prison. (CBS/AP) INDIANAPOLIS - Paula Cooper, an Indiana woman put on death row at age 16 for killing an elderly Bible school teacher, is scheduled to be released Monday after serving a prison term that was shortened after the state Supreme Court intervened. 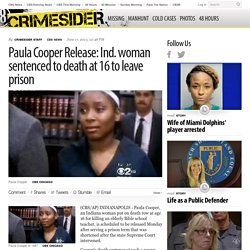 Cooper's death sentence at such a young age sparked international protests and a plea for clemency from Pope John Paul II. Now 43 years old, Cooper is being given a second chance at her life. Cooper was 15 when she and three other teenage girls showed up at Ruth Pelke's house on May 14, 1985, with plans of robbing the 78-year-old Bible school teacher. Pelke let Cooper and two of the teen's companions into her Gary home after they told her they were interested in Bible lessons. As the fourth teen waited outside as a lookout, Cooper stabbed Pelke 33 times with a butcher knife. Cooper's three accomplices were sentenced to prison terms ranging from 25 to 60 years. Since then, the U.S. "There are second chances," she said. Paula Cooper: A second chance at life. Paula Cooper's 2012 interview : Digital Exclusives: Video. 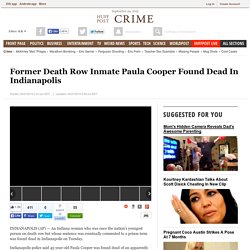 Indianapolis police said 45-year-old Paula Cooper was found dead of an apparently self-inflicted gunshot wound outside a residence on the city's northwest side. Cooper had been released from prison about two years ago, after the Indiana Supreme Court set aside her death sentence and gave her a 60-year prison term. Cooper was 16 when she was sentenced to death in 1986 after confessing to her role in the murder of a 78-year-old Gary Bible studies teacher the year before. Cooper admitted stabbing 78-year-old Ruth Pelke 33 times with a 12-inch butcher knife in a robbery that netted four youths $10 and an old car. Cooper was 15 at the time the crime was committed.

Her death sentence enraged human rights activists in the U.S. and Europe and drew a plea for clemency from Pope John Paul II. Freedom, Finally, After a Life in Prison. Photo WHEN she was 15 years old, Paula Cooper and three high school classmates in Gary, Ind., decided to cut school and steal some money to play games at a local arcade. 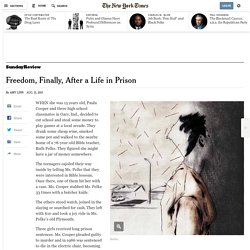 They drank some cheap wine, smoked some pot and walked to the nearby home of a 78-year-old Bible teacher, Ruth Pelke. They figured she might have a jar of money somewhere. The teenagers cajoled their way inside by telling Ms. Pelke that they were interested in Bible lessons. The others stood watch, joined in the slaying or searched for cash.

Three girls received long prison sentences. What followed was extraordinary. “She told me how truly sorry she was for what she’d done,” said Mr. More than two million people, most of them in Europe, signed petitions on behalf of Ms. In 1989, Indiana’s Supreme Court commuted Ms. She didn’t know how to use the Internet. She nevertheless got a job cooking hamburgers at Five Guys and soon became a manager. “You’ve got to have hope,” Ms. On May 26, some two years after her release, Ms. Police: Paula Cooper committed suicide. On death row at 16, Paula Cooper is dead; suicide suspected. Associated Press. 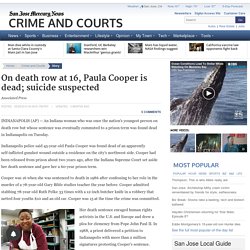 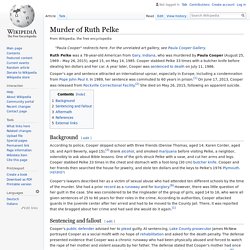 Cooper stabbed Pelke 33 times with a butcher knife before stealing ten dollars and her car. A year later, Cooper was sentenced to death on July 11, 1986. Cooper's age and sentence attracted an international uproar, especially in Europe, including a condemnation from Pope John Paul II. In 1989, her sentence was commuted to 60 years in prison.[1] On June 17, 2013, Cooper was released from Rockville Correctional Facility.[2] She died on May 26, 2015, following an apparent suicide.

Background[edit] Cooper's lawyers described her as a victim of sexual abuse who had attended ten different schools by the time of the murder. Sentencing and fallout[edit] Paula Cooper Free: Woman On Death Row Befriends Victim's Grandson (VIDEO)