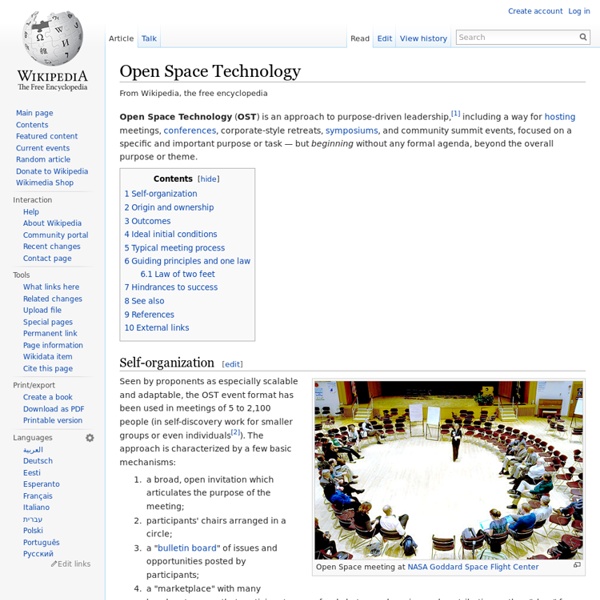 Open Space Technology (OST) is an approach to purpose-driven leadership,[1] including a way for hosting meetings, conferences, corporate-style retreats, symposiums, and community summit events, focused on a specific and important purpose or task — but beginning without any formal agenda, beyond the overall purpose or theme. Self-organization[edit] Seen by proponents as especially scalable and adaptable, the OST event format has been used in meetings of 5 to 2,100 people (in self-discovery work for smaller groups or even individuals[2]). The approach is characterized by a few basic mechanisms: The approach is most distinctive for its initial lack of an agenda, which sets the stage for the meeting's participants to create the agenda for themselves, in the first 30–90 minutes of the meeting or event. Typically, an "open space" meeting will begin with short introductions by the sponsor and usually a single facilitator. Origin and ownership[edit] Outcomes[edit] Ideal initial conditions[edit] Related:  El Camino de la Transición

ESPACIO ABIERTO - PASOS Process and Spot Writing Wednesdays By Steven Pressfield | Published: August 6, 2014 Boredom alert: this post is about golf. Rory takes home the claret jug If your reaction is “Arrggh!”, now is your chance to bolt. Here goes: Rory McIlroy won the British Open a couple of weeks ago. Rory confessed that indeed he had two specific words that he was repeating to himself. He won. Reporters clamored. Rory said, “You guys are gonna be disappointed. Process and Spot. What did Rory mean by this? Golfers do this. Study the lie and the distance, take into consideration wind and other external factors, decide what kind of shot you want to hit (high, low, draw, fade), visualize this shot, select the proper club to play it, and so forth—including controlling your breathing, minding the speed at which you walk, adhering to the customary number of practice swings you take—up to the moment of actually pulling the trigger. That’s what Rory meant by “process.” Next: Spot. This was Rory’s thought for putts on the greens. 1. 1. 2.

inviting faster, easier organization – everywhere For many, Open Space has been a daring and marvelous exploration of the vastness and the urgency of personal and organizational transformation. For others, it’s just an exceedingly effective, and efficient, meeting methodology. Welcome to a slice of all of that… Join us later this year for Open Space on Open Space world practice conference in Tainan, Taiwan on October 26-28. After thirty years and literally millions of invitations and actions, small meetings and large events, conversations and publications, organizations and adaptations – in more than 140 countries – the Open Space story can get a bit messy. OpenSpaceWorld.ORG doesn’t own or control any of that and couldn’t possibly define, evaluate or curate it all.

Marketplace, Open Space Technology La dinámica Teachers practice ‘law of two feet’ at ‘unconference’ in East Helena Teachers from across western Montana spent Thursday discussing topics to improve classrooms during the coming school year. But they weren’t listening to a lecture or hearing from an out-of-state expert — they were learning from each other. When teachers arrived Thursday morning at the “unconference,” called Ed Camp MT, no one knew what they were going to learn because the attendees were responsible for picking the topics. “People can say what they want to learn about, and they learn exactly what they need,” organizer Chris Dexter said. About 60 teachers attended the camp — all for free — held at East Valley Middle School in East Helena. Most were from the Helena region, but some came from Great Falls, Missoula and other western Montana cities. Upon arrival, the teachers wrote on note cards topics they wanted to learn about, and the most popular topics were chosen by Dexter and fellow organizer Marne Bender as sessions for the day.

Las 4 Reglas y la Ley What is an unconference? | Scripting News Annex The idea for an unconference came while sitting in the audience of a panel discussion at a conference, waiting for someone to say something intelligent, or not self-serving, or not mind-numbingly boring. The idea came while listening to someone drone endlessly through PowerPoint slides, nodding off, or (in later years) checking email, or posting something to my blog, wondering if it had to be so mind-numbingly boring. A fundamental law? This observation may turn out to be the Fundamental Law of Conventional Conferences. The sum of the expertise of the people in the audience is greater than the sum of expertise of the people on stage. It’s probably much worse than that. Turning things around So then, how do you turn things around so that we can harness the expertise we just discovered and get a discussion moving efficiently and spontaneously without forcing the interesting conversations into the hallway. First, you take the people who used to be the audience and give them a promotion.

WEB - OPEN SPACE - TRANSITION NETWORK Belief in external experts and our dependence on their telling us what to do next has become commonplace. However, much of what we need is around us. We need ways to unlock the knowledge and ideas of our community. Two approaches often used by Transition groups are World Café and Open Space. The following information will help you run sessions on them. Open Space Technology[i] This is for groups from 10 to 1,000 people who need to explore a major issue. Whoever comes are the right people.Whatever happens is the only thing that could have happened.When it starts is the right time.When it’s over, it’s over. ...and one ‘law’, ‘The Law of Motion and Responsibility’: “If, during the course of the gathering, any person finds themselves in a situation where they are neither learning nor contributing, they are invited to use their feet and go to some more productive place.” Step-by-step guide to running an Open Space event Open Space is great for gathering ideas that lead to practical projects.