Sandy Banks farewell to readers. This is my final column for the Los Angeles Times. 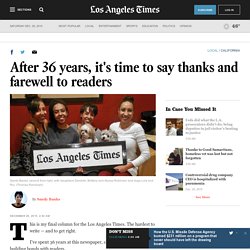 The hardest to write — and to get right. I've spent 36 years at this newspaper, sharing stories and building bonds with readers. I've spent the last few weeks wondering, What do I say about leaving? This job has been the perfect fit. I was the kid who asked too many questions and left no thought unexpressed. Writing a column enlightened me by forcing me to scour the news and examine every personal encounter for some lesson or universal message. The meaning of life in 900 words twice a week. That meant I was always sniffing the air in search of ideas. Sometimes, I was still gasping and empty as deadline neared. In the process, I've learned a lot — about myself and my city. I will miss the intensity, the process of discovery. Can I write a column about this? " I'm going to miss my tribe — smart, hard-working, passionate journalists who help people make sense of the world.

I'm going to miss my readers. Chris Dufresne. My first recollection of the Los Angeles Times is my dad parking his delivery truck outside our house whenever he had a drop-off in La Habra. 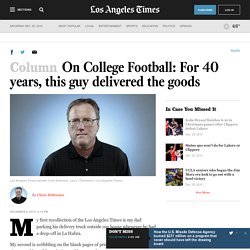 My second is scribbling on the blank pages of printing-press paper my sisters and I used for coloring and homework. The third is my pop, who worked graveyard for 10 of his 37 years in The Times' transportation department, slamming the newspaper down on the kitchen table the morning after Robert Kennedy was assassinated at the Ambassador Hotel. My fourth is hearing a high school English teacher praising the work of Times sports columnist Jim Murray.

I was all newspaper in — hook, headline and sinker. That guy I knew in transportation landed me a job on the loading docks June 17, 1976, a few days after high school graduation. My first memory of the job is being petrified after getting assigned to be a companion rider on a midnight delivery run into a seedy section of town. NASA had its Mission Control, we had ours. S. Irene Virbila. S. 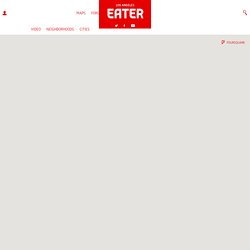 Irene Virbila, whom industry insiders and media professionals often refer to as "Sherry," will be taking a generous buyout offer from the LA Times, reports LA Observed. The longtime restaurant critic, who served the paper for 22 years, eventually replaced Ruth Reichl as the publication's primary dining arbiter. Today, Virbila gave Eater LA this comment regarding her tenure at the LA Times: I thought I'd last 3 weeks at the Times not 22 years. (Deadlines were never part of my DNA, but the printing presses were waiting and I managed to learn that skill.) With the ever-changing media landscape, both Russ Parsons and Virbila have taken buyouts in recent weeks. In 2010, Red Medicine partner Noah Ellis outed Virbila before she planned to dine at the restaurant. Virbila was still awarding stars up until a couple of years ago, before Jonathan Gold stepped in as the primary restaurant critic for the publication.

Map Data Map data ©2015 Google. Walk-off wisdom from Bill Dwyre. There are a million stories in the naked city, and I'm not going to get to all of them. 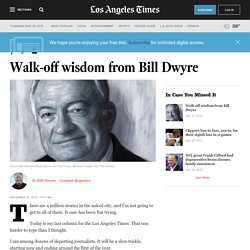 It sure has been fun trying. Today is my last column for the Los Angeles Times. That was harder to type than I thought. I am among dozens of departing journalists. It will be a slow trickle, starting now and ending around the first of the year. It was our choice. Buyout list at LA Times 'makes you want to cry' An LA Times newsroom pod. 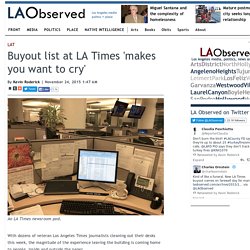 With dozens of veteran Los Angeles Times journalists cleaning out their desks this week, the magnitude of the experience leaving the building is coming home to people, inside and outside the paper. Among the departures I have confirmed are two assistant managing editors, the main politics editors for City Hall and California, the bureau chiefs in New York, Seattle, San Francisco, San Diego, Las Vegas and London, all of the obituary writers, most of the "backfield" editors who handle national and foreign stories, the top editors of features and Sunday Calendar, the editor in charge of Column One stories, the wine columnist, the editor in charge of editing standards, as many as a half dozen photographers, at least that many copy editors, and many more in various positions.

Other prominent editors and writers are named on lists being circulated, but I have not confirmed their actual plans to finalize the buyout deal.