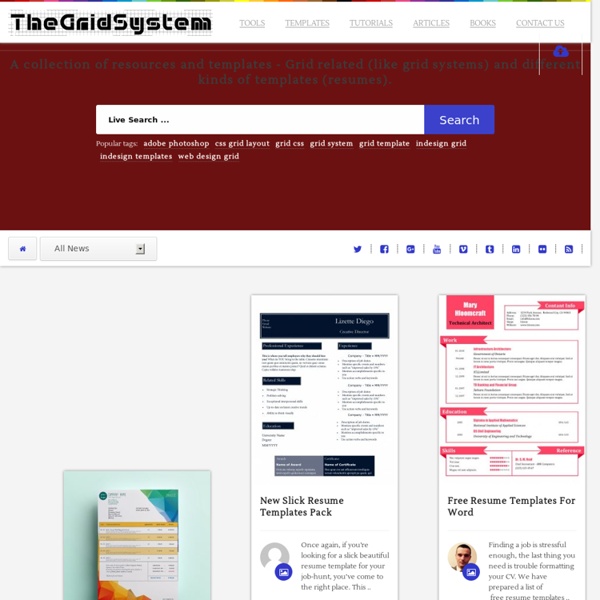 This arti­cle is for web design­ers and front-end web devel­op­ers who are inter­ested in grid-based lay­out sys­tems but are at a loss on how to decipher them. 04.Mar.2012 A PDF writ­ten by Andrew Maher to help you design grids and to give you the resources to delve fur­ther into the grid world. Mark Boul­ton pulls together some of his thoughts and con­cerns regard­ing CSS grids and how they could (or, maybe, should) be created. A fold­ing grid for responsive design. An HTML5 & CSS3 devel­op­ment kit that pro­vides a solid foun­da­tion to quickly design web­sites with ease.

The nonagon (Method „A“) « Sacred geometry THE NONAGON (Method „A“)with example of trisection of angles larger than 90° Foreword to Chapter Eight Before we say anything about the nonagon, we will „single out“ one of the fundamental laws of sacred geometry that we might have noticed in our presentations up to now and which will be deepened in our forthcoming chapters. In addition to the fact that in sacred geometry all curves and straight lines are given in their full circumference, meaning in arched full circles and straight lines across all areas of the circles, and as we have said, all intersection points incurred by such inscribing are new data and as “controllers” of the accuracy of the geometric plotting and data, the fundamental law would read: The initial – central circle is the mirror of all the other radii originating outside it and within it. An example is the hexagon (scheme – pattern – validity).

Page Layout Design Home > Design Tips > Page Layout Design In this tutorial, we’ll explore the design phase of document creation. With the grid as our layout guide, we’ll look at the various ways that elements—text, images, graphic objects, and so on—can work together to produce effective layouts. The grid provides a structured framework for a layout, but it should not limit design or stifle creativity. Rather than forcing you to work rigidly within its confines, the grid layout should work for you, allowing you to dictate the look and feel of your publication. We’re confident you’ll never look back!

23 Free, Vector Icon Packs for Social Media It's massive freebie time again! We've rounded up a huge collection of social media icons in, you guessed it, vector format. These designs are simple, clean, and versatile. They're easy to integrate into your next app, interface, blog, web design, or anything you have in the pipeline that needs to connect via social networking. There are multiple unique pack designs, and hundreds of free vector icons to grab a hold of. Five simple steps to designing grid systems – Part 1 – July 4th, 2005 – The first part of this Five Simple Steps series is taking some of the points discussed in the preface and putting it to practice. Ratios are at the core of any well designed grid system. Sometimes those ratios are rational, such as 1:2 or 2:3, others are irrational such as the 1:1.414 (the proportion of A4). This first part is about how to combine those ratios to create simple, balanced grids which in turn will help you create harmonious compositions. Starting with a blank canvas

Typeface Anatomy and Glossary Here’s a glossary of common type terminology, which along with the FAQs may answer many font related questions. If the information you need isn’t here, call us. Abbreviations Many fonts have abbreviations in their names. Applying the Golden Ratio to Web Layouts and Objects by anthony on 10/21/10 at 5:36 pm 1.618 is a number all serious designers should know. It’s known as the golden ratio found throughout nature, art and architecture. Seashells, the Mona Lisa and the Parthenon all show the golden ratio. How to Create a Professional Magazine Layout A few times a each month we revisit some of our reader’s favorite posts from throughout the history of Vectortuts+. This tutorial by Otto Coster was first published on August 4th 2010. Have you ever wondered how professional designers strike the perfect balance between text and image? Using InDesign's powerful type tools, you will learn techniques to help you set and arrange a magazine layout. Step 1 Setting up the Document We'll be using a standard A4 size document for this tutorial.

15 Desktop & Online Wireframing Tools Like most things today, the world of interaction design moves quickly. Although a pen and notebook may suffice when it comes to simply jotting down ideas, planning a series of website screens can sometimes demand additional precision and cohesion. This is where today’s wireframing tools come in. Engineered to make the design process as intuitive as possible, these tools allow you to construct a visual representation of your interface. Some even allow designers to construct interactive prototypes in order to receive user feedback before a single line of code is written.