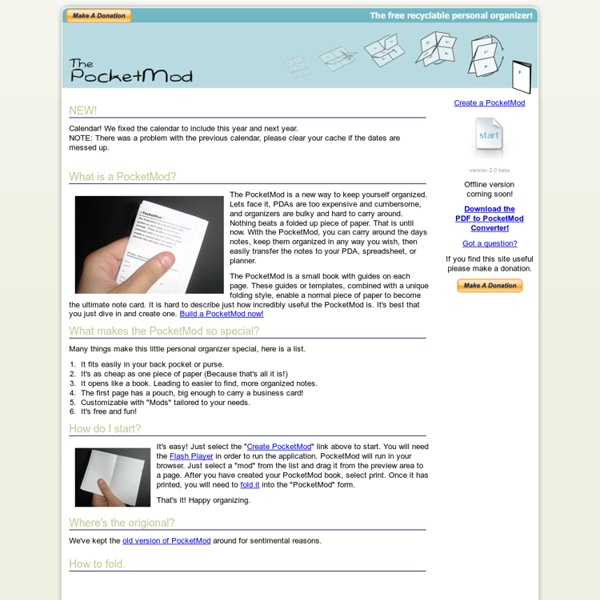 Calendar! We fixed the calendar to include this year and next year. NOTE: There was a problem with the previous calendar, please clear your cache if the dates are messed up. What is a PocketMod? The PocketMod is a new way to keep yourself organized. Lets face it, PDAs are too expensive and cumbersome, and organizers are bulky and hard to carry around.

Knock-Knock Jokes for Kids & Grown-Ups  Knock! Knock! Who’s there? Control Freak. Con— About Listen: 43 Folders is Merlin Mann’s website about finding the time and attention to do your best creative work. And, Hello. 43 Folders was launched by Merlin Mann on Wednesday, September 1, 2004 with an introductory post whose improbable title suggested that productivity can be like sausage; no one likes seeing it discussed at length on the internet by middle-aged men. The site continues to evolve, grow, contract, expand, recede, explode, go dark, go weird, go personal, and even occasionally reinvent itself -- all depending on where Merlin's interest, attention, and obsessions find him at a given time. But, in fairness, they are his obsessions, and he owns that.

Free Printable Planners, Organizers and Charts 'I need to get organized.' How many times have you said that or heard someone say it? Too many times to count, I'd imagine. How the food you eat affects your brain - Mia Nacamulli Your brain is like a machine that needs specific materials to function well. This website breaks down the different nutritional parts that are necessary, and how they interact with the brain. Take a look and learn about some brain food. Glucose is the brain’s fuel. Interested in the interaction between our mental performance and the amount of glucose we have? How about the effects of extreme dips in glucose, like during starvation?

Critical Thinking Exercises That Will Blow Your Students’ Minds Let’s clarify something first before talking about mind-blowing critical thinking exercises. This is as opposed to analytical thinking and lateral thinking. There is a difference, according to Jon Warner: Analytical thinking mainly aims to review the data/information we are presented with (for relevance, patterns, trends etc.)Lateral thinking aims to put data/information into a new or different context (in order to generate alternative answers or solutions)Critical thinking aims to make an overall or holistic judgment about the data/information which is free from false premises or bias as much as possible. Getting Things Done The GTD method rests on the idea of moving planned tasks and projects out of the mind by recording them externally and then breaking them into actionable work items. This allows attention to be focused on taking action on tasks, instead of recalling them.[2] First published in 2001, a revised edition of the book was released in 2015 to reflect the changes in information technology during the preceding decade. Themes[edit] Allen first demonstrates stress reduction from the method with the following exercise, centered on a task that has an unclear outcome or whose next action is not defined. Allen calls these sources of stress "open loops", "incompletes", or "stuff".[1]:13