Wellbeing (teachers and others)

Relationships in 21st century forgotten foundation mental health wellbeing full may 2016. Highest teacher leaving rate in a decade - and 6 other things we learned about school workforce. Record numbers of teachers are leaving the profession bolstering claims of a recruitment crisis, according to new figures released today by the Department for Education. 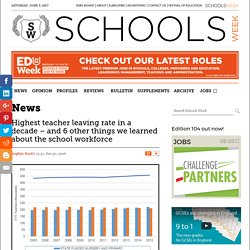 While headline figures from the workforce census show there are an extra 2,000 teachers working in schools, further analysis highlights a worrying trend of teachers leaving the profession. Nearly one in ten teachers left the profession last year – the highest proportion for a decade – and almost a quarter of teachers now leave within three years. The Department for Education has been criticised by numerous groups – unions and other government agencies – about its unwillingness to acknowledge a problem. The public accounts committee earlier this month slammed the DfE for its lack of “leadership or urgency” in tackling supply issues, after a scathing report by the National Audit Office revealed a series of weaknesses in teacher training. Below Schools Week picks out the main points from the data: 1.

Relationships in 21st century forgotten foundation mental health wellbeing full may 2016. Tips on reducing teacher stress from the ‘happiest school on earth’ An extra week’s summer holiday, shutting the school at 5.30pm and cancelling revision sessions are just some of the ways more considerate headteachers are trying to ease the burden on teachers. 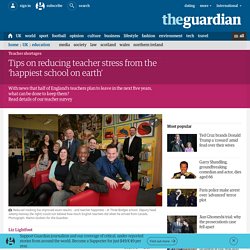 A happy staff makes a happy school and it helps to have the right Twitter handle. Step forward Jeremy Hannay, deputy headteacher @happiestschoolonearth aka the Three Bridges primary school in Southall, west London. He arrived in the UK from Ontario, Canada, and couldn’t believe what he found. “I had never seen so much marking before I came to England. 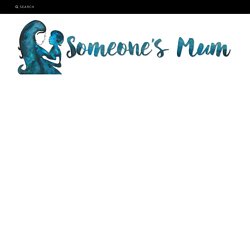 I am the mother of two tiny people, a girl, aged one and a boy, aged three. Parenthood is a job that requires us to give up almost all of our time and energy for the well-being of another. Teachers too are, by nature, givers. The desire to help others, to give something of ourselves up for their inspiration, their betterment, is at the heart of belonging in the classroom. So we find ourselves giving. When I was a young and idealistic teacher, the pressures of the job were a price I was willing to pay for the unrivalled satisfaction of knowing I was truly helping a young person. 'Nicky Morgan missed the point – retention is not about flexible working hours, it’s about too many working hours' Well done Ms Morgan for paying attention to the women in their late 20s and early 30s who leave teaching. 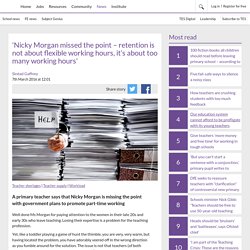 Losing their expertise is a problem for the teaching profession. Yet, like a toddler playing a game of hunt the thimble, you are very, very warm, but having located the problem, you have adorably veered off in the wrong direction as you fumble around for the solution. The issue is not that teachers (of both sexes) need opportunities to work part-time or flexibly, laudable though that proposition may appear on the face of it. In our profession, which is quite different from many other professions, that is the wrong answer to the correct question.

On death, FOIs, and coping at work: A very personal essay – Laura McInerney. Four weeks ago, on a Friday afternoon, I received a text saying the government had dumped me. 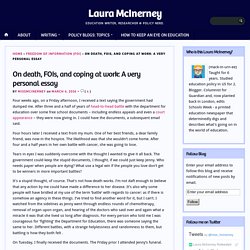 After three and a half of years of head-to-head battle with the department for education over some free school documents – including endless appeals and even a court appearance – they were now giving in. I could have the documents, a subsequent email said. Four hours later I received a text from my mum. Listen: Andrew Solomon on why depression can be as serious as heart disease. Headteacher scraps ‘mad’ year 11 revision classes to protect pupil mental health. A headteacher has scrapped extra revision classes and interventions for year 11 to protect students’ mental health in the run up to this summer’s exams. 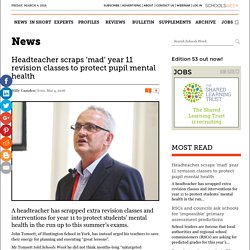 John Tomsett, of Huntington School in York, has instead urged his teachers to save their energy for planning and executing “great lessons”. Mr Tomsett told Schools Week he did not think months-long “untargeted interventions” had a positive impact on results. How to promote good mental health among teachers and students in your school. We all know the basic requirements to maintain good physical health. 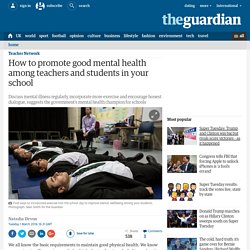 We know we must eat well, exercise regularly, drink plenty of water, alcohol in moderation etc. These golden rules have been impressed upon most of us since we were old enough to comprehend them. When it comes to mental health, however, we’ve been taking a different tack; most of us wait for mental illness symptoms to arise before giving the health of our minds any consideration.

How to promote good mental health among teachers and students in your school. Unrelenting pressure and 12 hour days: headteacher recruitment is in crisis too. Lesley Short spent her entire career working up to the role of headteacher. 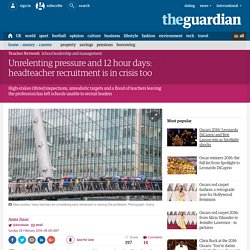 But last December, she resigned as assistant principal at King’s Lynn Academy in Norfolk and retired. “I was doing 12 hour days, five days a week at work, and then bringing work home. But then my father got ill and died about a year ago and I realised you can’t do this and have a life as well.” Short, who is 58 and intended to retire aged 65, is not unusual.

While polls suggest half of all teachers are considering leaving the profession, an increasing proportion are also taking early retirement or leaving teaching. There are a range of issues driving the leadership crisis including the pressures of inspection, struggles to recruit teachers lower down the ranks and the leadership model in academies creating more senior roles to fill when candidates are already thin on the ground. Teacher workload to rise as support staff axed. Thousands of non-teaching staff face losing their jobs in the wake of the 2016-17 budget deal from Scottish government councils warned MSPs this week. 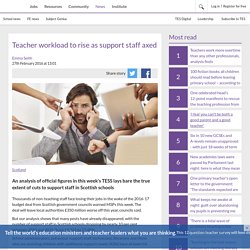 The deal will leave local authorities £350 million worse off this year, councils said. But our analysis shows that many posts have already disappeared, with the number of support staff in Scottish schools dropping by nearly 10 per cent between 2010 and 2015 (from 19,332 to 17,498). STOP and THINK.....what is happening to Education? So let's just STOP and THINK about education. 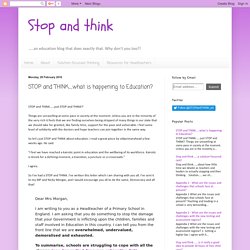 I read a great piece by oldprimaryhead a few weeks ago. He said: Teacher workload to rise as support staff axed. Unrelenting pressure and 12 hour days: headteacher recruitment is in crisis too. Golden handcuffs for teachers won’t solve the staffing crisis in our schools. England’s chief inspector of schools, Sir Michael Wilshaw, pointed out an inconvenient truth last week: more than 100,000 teachers trained in the UK now work in British international schools overseas, a number that has increased by a quarter in a year. On the one hand, the popularity of British schools abroad is a triumph. The British (mostly English) companies running the schools earn good money and pump cash back into Treasury coffers. EBacc teacher recruitment and retention: even more challenging times ahead? By Susie Bamford Secondary schools face particular teacher recruitment and retention challenges, especially in some English Baccalaureate (EBacc) subjects. This was one of the conclusions of NFER’s report last November, Should I Stay or Should I Go: NFER Analysis of Teachers Joining and Leaving the Profession.

The report was well received, primarily for its fresh and independent take on the emotive topic of a so-called workforce crisis. Results from our November Teacher Voice survey are now in and further illustrate the increasing challenge schools are potentially facing. Focusing just on secondary schools, we find that a significantly higher proportion of EBacc teachers are considering leaving the profession compared to non-EBacc teachers.

Are you considering leaving teaching within the next 12 months? Source: NFER Teacher Voice, November 2015 Secondary school teachers classified according to whether they teach at least one EBacc subject (497 respondents) or not (182 respondents) Please ignore this blog. Just under a year ago I was sitting in a classroom in North London and contemplating my decision to leave teaching. Although it was a difficult choice, I don’t regret it. The last year has given me the opportunity to engage with education and learning as I never have before. I’ve spoken at conferences on the other side of the world, led workshops for leaders, engaged in policy debate in parliament and in March I am even getting the chance to give a TEDx talk.

However, looking back over the year I can’t help but wonder why it took leaving the classroom for people to take my ideas on education seriously? Autonomous teachers are happier teachers, research finds. Teachers who feel in control of their working lives are significantly happier than those whose headteachers allow them little autonomy, research shows. But it is equally important not to empower teachers so much that they end up overburdened, argues the author of the study, Candy Whittome of Birkbeck, University of London. “A little bit doesn’t do very much,” she said. “The right amount is perfect. ‘There comes a point – and I feel we have reached it – when teachers say "stop". That we can't do any more’ The question that perpetually haunts teachers, headteachers and governing bodies in 2016 is this: "How can we truly provide a broad and balanced curriculum? " Reviewing Ofsted documentation would leave you thinking its inspectors see this as one of the most important elements of an inspection.

Is this the case, or are we deluding ourselves? Teacher Retention : More Than Just An Image Problem. Linking work and health: the What Works Centre for Wellbeing. The What Works Centre for Wellbeing is an independent body set up by the Government to build an evidence base on good practice in wellbeing interventions. Nic Paton looks at what the centre does and why it is important. 'We must stop undermining and destroying the talent and potential of teachers in the UK' In September last year, my brother got a job teaching English at a state secondary school in France (he has lived there since 2006).

Since then, I have learnt much about the teacher’s place in the French education system. Putting a Contract out on Teachers. EBacc teacher recruitment and retention: even more challenging times ahead?