Squareeater - binaural audio and brainwave entrainment for the psychedelic mind 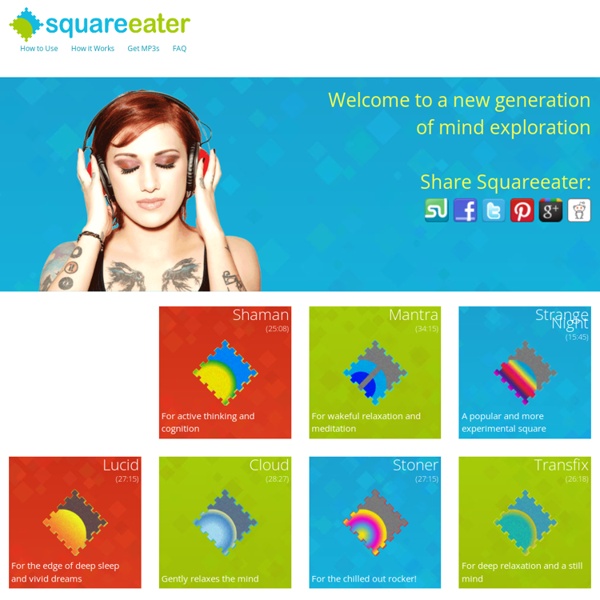 Paradox of tolerance The tolerance paradox arises from a problem that a tolerant person might be antagonistic toward intolerance, hence intolerant of it. The tolerant individual would then be by definition intolerant of intolerance. Discussions[edit] Michael Walzer asks "Should we tolerate the intolerant?". He notes that most minority religious groups who are the beneficiaries of tolerance are themselves intolerant, at least in some respects. In a tolerant regime, such people may learn to tolerate, or at least to behave "as if they possessed this virtue".[1] Philosopher Karl Popper asserted, in The Open Society and Its Enemies Vol. 1, that we are warranted in refusing to tolerate intolerance.

Mental Projection Hello! After experimenting with energy manipulation for several years and adapting my own way to project while in a meditative state I decided to write a tutorial on how I personally do it. after some reasearch I found that this is an adaption of a native american technique on Astral Projection, or Dreamwalking. this is a quick guide on how to Mentally Project: First start with a trance state, my favorite method is to let all of your thoughts play out instead of forcing them away. Practice Mindfulness of Death Meditation Edit Article Edited by George AP, mia, Lojjik Braughler, Ranae and 3 others While there are certainly more meditations out there that are harder to do, this one is one of the hardest to do well, even for experienced meditators. This meditation, in fact, is more or less insight focused, since it can't be developed very far by means of concentration or be much use for relaxation, but the scope of benefits are vast.

Why words are as painful as sticks and stones - life - 04 December 2012 IT STRUCK suddenly. First there was an ache in my chest, as if my sternum was laced too tightly. Then came the headaches and chronic tiredness. World we see is make-believe, top British scientist says THE human brain creates its own version of reality, and the world we see around us is mostly make-believe, according to a top British scientist. Professor Bruce Hood will explore the limits of the human mind in a series of prestigious lectures for the Royal Institution of Great Britain, the oldest independent research body in the world, it was announced yesterday. The psychologist plans to induce false memories in audience members and use pickpockets to demonstrate how easily people are distracted, in a bid to prove how we have less control over our own decisions and perceptions than we like to imagine. "A lot of the world is make-believe.

HOW TO – Make the “Brain machine” Best known for inventing TV-B-Gone, a keychain that turns off TVs in public places, Mitch Altman is interested in any technology that gives people more choices for improving their lives. You don’t have to be a Buddhist monk to meditate, or a Sleeping Beauty to sleep well. Achieve these altered states of consciousness, and others, with this simple microcontroller device.What would happen if you could play a recording of brain waves into someone’s brain?

Guided Practices Download these guided meditations to your mp3 player or listen online. To listen, simply click on a practice and wait for it to load. To download, right-click (Mac users, CTRL-click) and select “save link as” or “save target as.” Why Emotion Will Usually Outweigh Logic In The Audience’s Brains Many people like to think that business is all about logic, and that customers behave having rationally analysed all available data, considered the various pros and cons of different courses of action and come to a logical conclusion. Although it’s very difficult for very logical people to understand (e.g. accountants, engineers, IT professionals), this could not be further from the truth, as the quote above from Buck Rogers of IBM demonstrates (and he was talking about mainframe computers!). The reality is that a high percentage of the time people make decisions based purely on emotion. They may well rationalise that decision afterwards by using logic, but the decision itself is made on emotion.

Brainwave/Cymatic Frequency Listing This is a listing of frequencies that various parties have claimed can affect the human mind or body in some way. The following sorts of frequencies are included : Brainwave Frequencies - These are frequencies associated with various mental states. Using brainwave entrainment, you can coax your brainwaves to a certain frequency, and in doing so, achieve the mental state associated with that frequency. "Healing" Frequencies - These are frequencies that various parties claim could be used to heal illnesses of different kinds, or stimulate some region of the body (chakras).

Walk This Way Try these simple set of instructions for walking meditation, and keep this chart handy for practicing on-the-go. By Barry Boyce Illustrations by Jason Lee TIME: 10 minutes