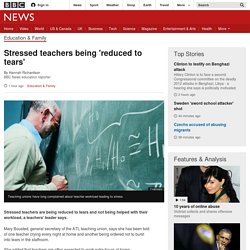 Mary Bousted, general secretary of the ATL teaching union, says she has been told of one teacher crying every night at home and another being ordered not to burst into tears in the staffroom. She added that teachers are often expected to work extra hours at home. And she called on head teachers to back their staff, while ministers have pledged to reduce unnecessary workload. Dr Bousted, writing in the Times Educational Supplement, said how she was "silenced" by a young man who told her how worried he was about his primary school teacher partner. Flexible working helps women succeed but makes men unhappy, study finds.

Women with flexible work arrangements are more likely to succeed and enjoy promotions, while men with similar working arrangements feel discouraged, harshly judged and that their career has been jeopardised, joint research from Bain & Company and Chief Executive Women has found. 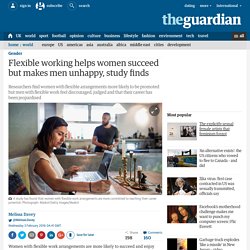 Researchers asked 1,030 staff across Australian workplaces about their use of flexible work arrangements, and about how they perceived their organisation. A flexible workplace was defined as one that allowed employees control over when, where and how they work, including working part-time, working from home, setting their own hours and taking leave. The researchers also asked employees to rate their likelihood of recommending their organisation as a place to work, and as a place for women to progress to senior levels. Confidence and commitment levels were lower for men who worked flexibly than those who did not, the report found.

Why too much choice is stressing us out. Once upon a time in Springfield, the Simpson family visited a new supermarket. 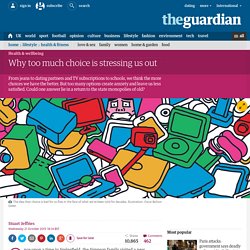 Monstromart’s slogan was “where shopping is a baffling ordeal”. Product choice was unlimited, shelving reached the ceiling, nutmeg came in 12lb boxes and the express checkout had a sign reading, “1,000 items or less”. Health well being agenda 2016 first steps full potential. Workplace loneliness is a real problem. For 45 hours a week I feel isolated. It was an average morning. 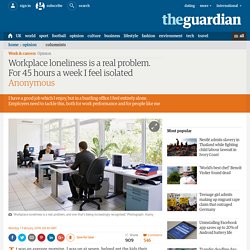 I was up at seven, helped get the kids their breakfast and hustled them into being ready for school. They left, and I went back upstairs to get dressed for work. But that’s not what I did. I got back into bed, and lay there for another hour, staring at the ceiling. I work in a large organisation, surrounded by clever, funny, like-minded people. I did it because I am lonely at work, and staring at the ceiling for an hour was about as much as I could face.

The result is that I feel almost entirely alone at work. But who cares, really? Except it’s not that simple. An academic study in 2011, by professors from California State University and Wharton School of Business, explained why workplace loneliness matters. The polling organisation Gallup offers employers 12 questions that will test an employee’s engagement at work. But how prevalent is loneliness at work? Human resources experts say that employers have to tackle this. Is there too much stress on stress? In 1925 a student at the Charles University medical school in Prague sat through his first lecture in the science of diagnosis, taking careful notes about how to examine a patient, and was struck by an observation that profoundly changed the history of modern medicine. 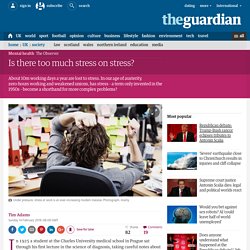 The student, then 19, was Hans Selye, and the observation he made was this: although the patients brought forward for diagnosis by his professor were in the early stages of different illnesses – measles, scarlet fever, the flu, various allergic reactions, duodenal ulcers, shingles – their symptoms all appeared remarkably similar.

To a man and woman, they complained of “a coated tongue, more or less diffuse aches and pains in the joints, intestinal disturbances and loss of appetite. Most had fever (sometimes with mental confusion), an enlarged spleen or liver, inflamed tonsils, a skin rash and so forth…”. Moreover, the patients “felt and looked ill”. This concept troubled Selye. This time, Selye was not put off. “Yes. Network%20rail%20health%20and%20wellbeing%20strategy. 'Email epidemic' is damaging UK productivity, says expert. Employers must tackle an "epidemic" of staff checking work emails after-hours, a former government adviser has said. 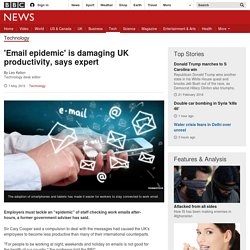 Sir Cary Cooper said a compulsion to deal with the messages had caused the UK's employees to become less productive than many of their international counterparts. "For people to be working at night, weekends and holiday on emails is not good for the health of our country," the professor told the BBC. He also wants limits on internal email. "We need to ban emails [sent and received] within the same building," he said, advocating instead for face-to-face meetings and phone calls. His comments follow a speech he gave on the topic to the British Psychological Society's annual conference, which was covered by the Times. However, the academic sought to clarify the newspaper's claim that he wanted IT staff to shut down employers' computer servers outside office hours.

"I'm not encouraging them to do that - I think it's pretty extreme to close down your server," he said.