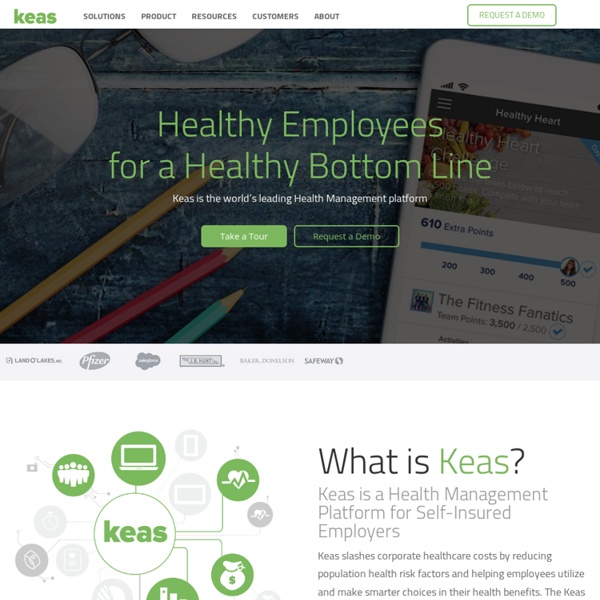 Keas Is Like FarmVille for Coorporate Wellness The Spark of Genius Series highlights a unique feature of startups and is made possible by Microsoft BizSpark. If you would like to have your startup considered for inclusion, please see the details here. Name: Keas Quick Pitch: Keas turns office fitness into a game. Genius Idea: Using addictive social games for a productive purpose. Before Adam Bosworth co-founded Keas, he led a project at Google that aimed to organize, track and monitor health information. Bosworth immediately created a startup with similar goals. “As valley people, we like information and we like data,” he says, “so we built a Mint.com for health.” Unsurprisingly, this too failed to take off. Keas is now a social game that operates a bit like FarmVille, and it has raised $16.5 million to date, $6.5 of which it announced Tuesday. What makes the game work, Bosworth says, is that users can only succeed if they don’t have slackers on their teams. HR departments don’t invite employees to sign up.

The 10 Best Foods for Your Looks - Lifestyle You can slather yourself from your forehead to your pinkie toe in organic lotions, but if you think that alone will make you glow, we have some bad news. From its well documented health benefits to its undeniable impact on physical beauty, good nutrition is the pillar of every kind of healthy lifestyle. That doesn't mean you need to swear off bacon and beer or anything. The trick is finding the right balance. But with new studies coming out every month about what we should put in our mouths—not to mention the unending discovery of mysterious superfruits from deep in the forests of wherever—it can be hard to keep track of what, exactly, we should be eating. To simplify things, here's a can't-go-wrong shopping list. This is the tenth installment in a series inspired by No More Dirty Looks: The Truth About Your Beauty Products and the Ultimate Guide to Safe and Clean Cosmetics, a book by GOOD's features editor Siobhan O'Connor and her co-author Alexandra Spunt. Read more on their blog.

Wellness: Designing an Effective Wellness Program, Step by Step By Allison Potempa and Steve Ritter 11/12/2007 Wellness programs are an innovative and effective approach with potential to drive down future health care costs for employers. According to the U.S. Bureau of Labor Statistics, from 1999 to 2005 access to employer-provided wellness programs rose from 17 percent to 23 percent. While some statistics tout compelling business returns for wellness programsfrom $1.50 to $17 per $1 investedreducing costs is only one objective. Program Cornerstones Some insurance programs offer reduced prices to members or groups that are proactive about maintaining their health. But some employers might not want to settle for a pre-packaged wellness program that runs the risk of not addressing a companys unique needs. Step No. 1Set the Goals of the Program The first step is to define your goals. Step No. 2Decide the Companys Level of Involvement The next step is to decide on a level of intensity for your program. Case Study:Program Implementation at Leaders Bank

Gabriel Gambetta - Pathfinding Demystified (Part I): Introduction Part I - Part II - Part III - Part IV Introduction Pathfinding is one of these topics that usualy baffles game developers. The A* algorithm in particular is poorly understood, and the general belief seems to be that it’s arcane magic. The objective of this series of articles is to explain pathfinding in general and A* in particular in a very clear and accessible way, and put an end to the misconception that it’s a difficult topic. Note that the focus is on pathfinding for games; unlike a more academic approach, we’ll just skip search algorithms such as Depth-First or Breadth-First. This first article explains the very basic concepts of pathfinding. A Simple Setup Although you’ll be able to apply these concepts to arbitrarily complex 3D environments, let’s start with an extremely simple setup: a 5 x 5 square grid. The very first thing we do is to represent this environment as a graph. Each node represents a “state” your character can be in. Now let’s add the edges. An Example explored = []

5 points concerning patient engagement and health IT With the slow demise of paper records and the rise of electronic platforms, the opportunity for patients to take hold of their healthcare has never been stronger. But, there are still a few setbacks and some points to keep in mind when it comes to health IT and patient engagement, said Sterling Lanier, CEO of Tonic Health. “You have medical forms and medical jargon built for the provider benefit and not the patient,” he said. “It’s confusing, tedious, and full of acronyms – it’s an alphabet soup. Patients feel lost. We want to make healthcare work for patients, and the closer we can get to a more accurate view of patient data, we’re better set up to change the way the model works and how people think about the model.” Lanier identifies five more points about patient engagement and health IT. 1. [See also: IT alliance presses for patient identifiers.] 2. 3.

GGF-001 Phoenix Gundam The GGF-001 Phoenix Gundam is an original mobile suit and one of the variants of GGF-000 Master Phoenix from the SD Gundam G Generation series which debuted in SD Gundam G Generation F. Its default pilot is Mark Guilder. Technology & Combat Characteristics The GGS-000 Phoenix Zero is believed to be the first prototype of the Phoenix series developed and was supposed to lead into the creation of the Phoenix Gundam. Not to be dissuaded efforts were instead concentrated on improving the GGS-000 Phoenix Zero, instead of abandoning it, and eventually this lead to the development of the GGF-000 Master Phoenix which was considered a success. While the Phoenix Gundam is considered a successful prototype it seems to have very few common features with other notable Gundams or even the GGF-000 Master Phoenix which it was also developed from. Later on the Phoenix Gundam would, at the hands of Mark Guilder, unleash its Full Power. Armaments Beam Saber Mega Beam Cannon Vulcan Gun Combinable Beam Rifle

UCR Walking Fit : Welcome to Walking Fit! Flood Fill Table of Contents Back to index Introduction The purpose of Flood Fill is to color an entire area of connected pixels with the same color. The Flood Fill algorithm is also sometimes called Seed Fill: you plant a seed (the pixel where you start), and, recursively, more and more seeds are planted around the original seed if those pixels have the correct color. There exist many different floodfill algorithm, 3 of them are discussed here, and two versions of each: a version with recursion, and a version with a stack. There also exists the so called Boundary Fill, this is very similar to Flood Fill, but will color an area with pixels of a certain color as boundary. You can download the full source code of this tutorial here. Test Program To test the different flood fill algorithms, we need a test program that allows you to create shapes to fill. Here are the stack functions, only used by 3 of the floodFill functions. Here's one of the auxiliary functions, clearScreenBuffer. Last edited: 2004

Nonprofit health organizations increase health literacy through social media As the presence of social media continues to increase as a form of communication, health organizations are searching for the most effective ways to use the online tools to pass important information to the public. Now, researchers at the University of Missouri have found that nonprofit organizations and community groups appear to be more actively engaged in posting health information and interacting with the public on Twitter than other types of health-related organizations, such as health business corporations, educational institutions and government agencies. "Twitter may be more appealing to nonprofit organizations because it creates a barrier-free environment that allows these organizations to share important information through real-time exchanges without significant efforts," said Hyojung Park, a doctoral candidate at the Missouri School of Journalism.