50 is plenty – Chris Eyre on Teaching. Recent news stories of 60 hour weeks, Debra Kidd’s honest reflections on her experience and the subsequent debate on Twitter have led me to a thought on teacher workload – 50 is plenty. 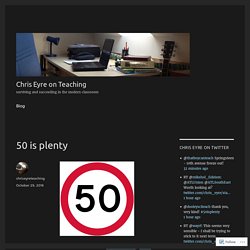 This is something I’ve said for a while, suggested in my book, and have tried to live by. But now I want to argue it little more strongly. Here’s the solution – what if we just stopped each week once we reached 50 hours? After all if the problem is too much work, logically the solution has to be less work. If the problem is too many hours then the solution must be fewer hours. Self-compassion is essential if you support or lead others. *As seen in I’ve long advocated that self-care is a responsibility not a luxury if you are in any way supporting or leading others. 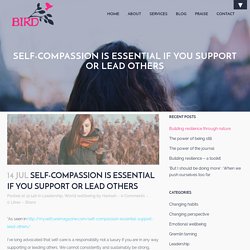 We cannot consistently and sustainably be strong, compassionate and effective if we aren’t treating ourselves with compassion and acknowledging ourselves as strong and effective individuals. Often we move through life thinking it’s normal to be self-critical, it’s modest and selfless and makes space for others to shine. But the opposite is in fact true. Kristin Neff explains that when we are self-critical we are in fact literally attacking ourselves. #Teacher5aday Wellbeing Buddy Box. This Minor Work Habit Is Burning You Out For No Good Reason. In the minutes before a Baton Rouge police officer killed 37-year-old Alton Sterling as he lay restrained in a convenience store parking lot, both the officer and his partner's body cameras "came dislodged" from their uniforms. 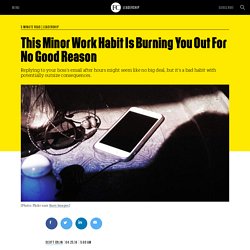 A month later, in August, a Chicago officer failed to turn on his body camera before he fatally shot unarmed 18-year-old Paul O'Neal in the back. And a few weeks ago in Charlotte, the plainclothes officer who fatally shot 43-year-old Keith Lamont Scott wasn't wearing a body camera. The other officer involved in the incident only activated his body camera after the shooting, a violation of city policy.

The failures—however accidental or convenient they may be—underscore the limits of a technology that is rapidly becoming a staple of the modern police officer's toolkit, amid an effort to build more trust between police and the communities they serve. But the technology isn't foolproof. Yu points at recent high-profile failures by police to record deadly encounters. Work for me, Wellbeing by Abigail Mann. I agreed to write a post about wellbeing for @misswilsey‍ weeks ago. 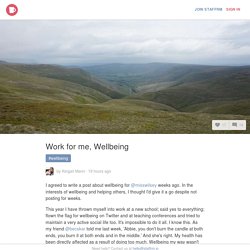 This Minor Work Habit Is Burning You Out For No Good Reason. There's an epidemic no one talks much about because it's rarely seen that way. 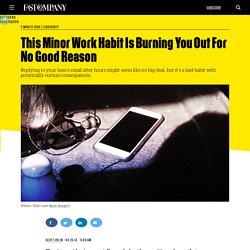 Even so, it makes no distinctions from one industry to the next; I've seen this bad habit infect the ranks of Fortune 500 companies in technology, retail, manufacturing, health care, pharmaceuticals, hospitality—you name it. The good news, though, is that it's easy to diagnose. In my experience of working with managers and executives, that starts by asking a single question: "How many of you send out emails from home at night? " Nearly everyone raises their hand. #Teacher5aday Wellbeing Buddy Box. After mentioning the idea last week, I’ve had a number of comments from people in regard to wanting to get involved. 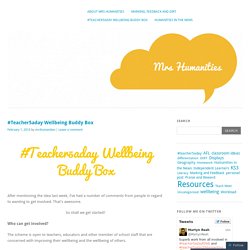 That’s awesome. So shall we get started? Who can get involved? The scheme is open to teachers, educators and other member of school staff that are concerned with improving their wellbeing and the wellbeing of others. It’s particularly awesome if you still love sending and receiving snail mail and are happy to volunteer. Guy Winch: Why we all need to practice emotional first aid. 10 TED Talks to Make You a Better You.

Pupil attainment linked to teachers’ wellbeing. Government ministers have been urged to take note of research that suggests there is a significant link between teachers’ health and wellbeing and the examination results of their students. 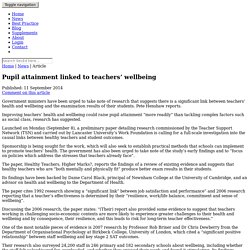 Pete Henshaw reports. Improving teachers’ health and wellbeing could raise pupil attainment “more readily” than tackling complex factors such as social class, research has suggested. Launched on Monday (September 8), a preliminary paper detailing research commissioned by the Teacher Support Network (TSN) and carried out by Lancaster University’s Work Foundation is calling for a full-scale investigation into the causal links between healthy teachers and student outcomes. Sponsorship is being sought for the work, which will also seek to establish practical methods that schools can implement to promote teachers’ health. Session 145: Fun ideas to reduce stress during work! Session 145 – Hosted by @ActionJackson Thursday 4th April 2013 – Fun ideas to reduce stress during work! 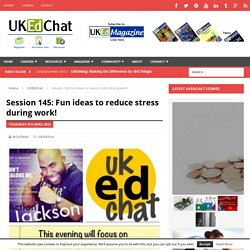 Summary: The whole discussion centred around the most effective ways of dealing with stress in the classroom with staff members and students. We focused on somef fun and quirky ideas. Confidence is a preference. In this great business called teach, we often feel that we are only as outstanding as our last lesson, whole-school initiative, inspection or staffroom pontification. 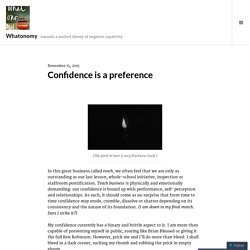 Teach business is physically and emotionally demanding: our confidence is bound up with performance, self-perception and relationships. As such, it should come as no surprise that from time to time confidence may erode, crumble, dissolve or shatter depending on its consistency and the nature of its foundation. (I am down to my final match. 7 Rules in Life .. #mindfulness #wellness. The Unexpected Benefits of Anxiety. For that public presentation that you’re dreading, how would you feel if your live audience was replaced by mannequins? 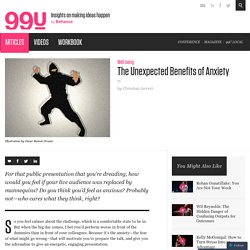 Do you think you’d feel as anxious? Probably not—who cares what they think, right? So you feel calmer about the challenge, which is a comfortable state to be in. But when the big day comes, I bet you’d perform worse in front of the dummies than in front of your colleagues. Because it’s the anxiety—the fear of what might go wrong—that will motivate you to prepare the talk, and give you the adrenaline to give an energetic, engaging presentation.

Indeed, calming yourself down is often the wrong thing to do. Calming yourself down is often the wrong thing to do. If you’re not anxious at all about an upcoming test, it probably means you don’t care. One way to prevent anxiety from getting out of hand is to recognize its benefits. Are You Happy at Work? #BlueMonday. With Blue Monday just around the corner we are about to hit the most depressing day of the year, statistically that is. Some people will have a great 26th January 2015 but for others it will be a bit of a nightmare. Blue Monday actually has its own equation; [W + D – d]TQ / MNa. The factors in the formula include the weather (freezing in January in Britain), our level of personal debt and our ability to repay it post-Christmas, the time since giving up on or failing our New Year’s Resolution, low motivation and the realisation we need to take action.

How to balance work with family life: a teacher's survival guide. Open any newspaper or turn on any TV and the chances are you will see a negative report on the state of teaching. From heavy workloads to rising stress levels, times are tough. But there’s lots to feel positive about too: I love my job. 18 Gorgeous Pictures That Remind Us The Days Are Getting Longer And Lighter. Oxford Mindfulness Centre » Meditation Resources. How To Simplify Your Life In 5 Minutes A Day. The situation for many of us is that life is fast and full of opportunity. The complication is we think we have to do everything. The implication of this is that we make a millimeter progress in a million directions.

My position is we can make a different choice. 20 years a teacher. A harmonious home life would make any stressful job easier to handle. My resolution has been the same every year since having children – to be the best parent I can be. Being a teacher geek does not always make family life easy. It may seem like a simple resolution to be a good parent, an easy and manageable target to achieve but honestly, rewriting a book in six weeks after dropping my mac was a far more manageable goal. Families are not as simple and straightforward as some facebook posts often lead you to believe. Behind the smiling photos of seemingly perfect children and white picket fences lay arguments, tantrums and tears.

Becoming a happier teacher. Image: @jasonramasami I’ve just finished reading behaviour and public policy expert Paul Dolan’s marvellous Happiness by Design. Originally it shone out invitingly from the shelves of Waterstones, but I didn’t take the bait until Mark Healy recently recommended it in this blogpost. I have often thought that we teachers are very adept at making ourselves needlessly unhappy – at work and in life generally – and this book has helped me to conceptualise this and find some potential solutions. For me, at least. Don't Quit: 5 Strategies for Recovering After Your Worst Day Teaching. Action for Happiness. Five ways to wellbeing. The following steps have been researched and developed by the New Economics Foundation.