Sleep and the Teenage Brain 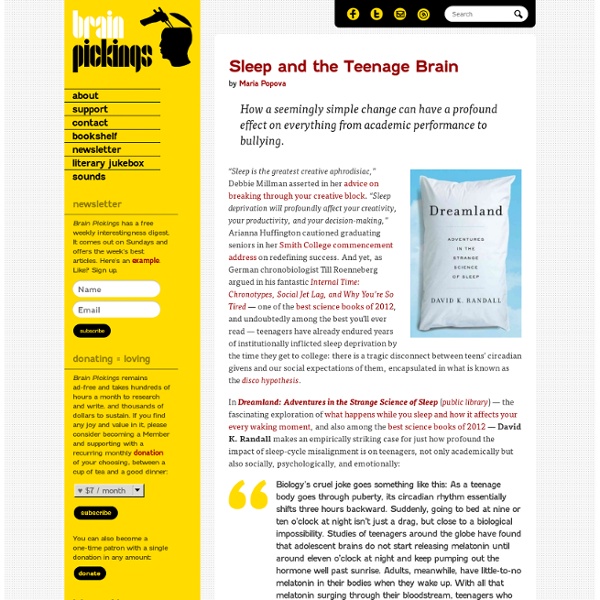 by Maria Popova How a seemingly simple change can have a profound effect on everything from academic performance to bullying. “Sleep is the greatest creative aphrodisiac,” Debbie Millman asserted in her advice on breaking through your creative block. In Dreamland: Adventures in the Strange Science of Sleep (public library) — the fascinating exploration of what happens while you sleep and how it affects your every waking moment, and also among the best science books of 2012 — David K. Biology’s cruel joke goes something like this: As a teenage body goes through puberty, its circadian rhythm essentially shifts three hours backward. Randall points out that those early school start times originated in an era when youths either had a job after school or had to complete chores on the farm, so the schedule was designed to fit everything in; thus, the teenage circadian rhythm has only become problematic in the past century or so. The school, however, stuck with the plan for the academic year. Related:  Wellbeing

Are You A Thoughtless, Inconsiderate Jerk Of A Person? Here's How To Tell. Are you kind of a jerk? Don't worry, this is a safe place, you can be honest. There are a lot of inconsiderate people out there; people who don't think of anyone but themselves; people who walk through everyday life oblivious to the world and the people living in it. It's often the little considerations that keep us from going completely insane at the end of the day. Think about all the times your day was brought to a screeching halt because you just could not get over that person who was so blatantly inconsiderate to you or even someone else around you. It's time to play the part of the surrogate mother holding you painfully by your ear. Well, do you at least look behind you to see if someone needs the door held for them? But you know the consideration doesn't stop at the door-holding end. How dare you not recognize my kindness! If there was a human being handbook given to all of us on the way out of the womb, surely "Eating And You" would be one of the essential chapters. Oh.

Eight Habits that Improve Cognitive Function Digital games are incapable of giving the entire brain a full workout. These digital programs can't really exercise the cerebellum (Latin: "Little Brain") and, therefore, are literally only training half your brain. These "brain-training workouts" are the equivalent of only ever doing upper body workouts, without ever working out your lower body. Although the cerebellum is only 10 percent of brain volume, it houses over 50 percent of the brain's total neurons. Neuroscientists are perplexed by this disproportionate ratio of neurons... Whatever the cerebellum is doing to optimize brain function and improve cognition, it recruits a lot of neurons to do it. Brain-Training Games Increase Sedentary Screen Time I believe these programs do have a risk because they add more sedentary screen time to a person's day. I have written dozens of Psychology Today blog posts about lifestyle choices and daily habits that improve brain structure, connectivity, and cognitive function. 1. 2. 3. 4. 5. 6. 7. 8.

Man Diagnosed 'Comatose' For 23 Years Was Actually Conscious All Along In what can only be described as a harrowing instance of misdiagnosis, a Belgian man presumed comatose for 23 years after a near-fatal car crash was actually conscious and paralyzed the entire time. Rom Houben, whose real state was discovered three years ago but only now made public, could be one of many falsely diagnosed coma cases, raising serious questions about those diagnosed as "vegetative" and, even more frighteningly, the process by which vegetative people are removed from life support. Houben, now in a facility in Brussels and communicating via a computer controlled by his minimally functioning right hand, came around after his 1983 car accident. But while he could hear every word his doctors spoke, he could not speak to them, nor could he move his body to communicate with them in any way. For years researchers and doctors tried to coax a response from Houben, who all along was trapped within his own body, living a life of frustration with his inability to interact.

7 Moments That Made 'Frozen' the Most Progressive Disney Movie Ever A Disney princess is graceful, elegant and soft-spoken. Until Mulan, the idea of a clumsy Disney princess was antithetical, and even she found grace and form through her combat training. Until Merida in Brave, the idea of an outspoken princess was unheard of. Image credit: Disney blog Not to mention that in the line of Disney princesses, there haven't been many, if any, with a sexual inkling or romantic forwardness — ever. Image credit: Tumblr She's clumsy, knocks things over all through the castle and runs into horses, which doesn't change over the course of the movie. Image credit: Rotoscopers

A Wonderful Graphic Featuring The Importance of Music in Education Music education is profoundly important to the success of individuals and learners. According to this graphic created by University of Florida, music is an essential element in students overall education and in some cases it is a precursor of good academic achievements. Some of the pluses of listening to music include : developing language skills and creativity, decrease anxiety and pain and speed up healing. It is also reported that music is known to help in some neurological disorders such as Parkinson, Alzheimer, and Autism. Have a look at the visual below to learn more about the importance of music in education. 35 Psychological Tricks To Help You Learn Better - InformED :

Trapped in his own body for 23 years - the coma victim who screamed unheard | World news For 23 years Rom Houben was ­imprisoned in his own body. He saw his doctors and nurses as they visited him during their daily rounds; he listened to the conversations of his carers; he heard his mother deliver the news to him that his father had died. But he could do nothing. He was unable to communicate with his doctors or family. He could not move his head or weep, he could only listen. Doctors presumed he was in a vegetative state following a near-fatal car crash in 1983. Then a neurologist, Steven Laureys, who decided to take a radical look at the state of diagnosed coma patients, released him from his torture. "I had dreamed myself away," said Houben, now 46, whose real "state" was discovered three years ago, according to a report in the German magazine Der Spiegel this week. Laureys, a neurologist at the ­University of Liege in Belgium, published a study in BMC Neurology earlier this year saying Houben could be one of many cases of falsely diagnosed comas around the world.

Frowning In Bright Sunlight Can Make You Angry Way back in 1872, Charles Darwin noted that when people look into bright sunshine they often frown, assuming a facial expression similar to that of anger. And indeed, when people look into bright light without sunglasses, they contract many of the same facial muscles as when they are angry. ("I'm not angry, it's just sunny out!" Recent work has shown that emotions can be influenced by facial expressions and body posture. With these two ideas in mind, a team of Italian researchers put forward the hypothesis that people walking into the sun without sunglasses (who were thus involuntarilty squinting/frowning) would be more likely to report feelings of anger and agressiveness, compared to people walking away from the sun. They found that people walking into the sun reported that they were significantly more angry, and more agressive, than those who were headed away from the sun.

Reframing Success: Helping Children & Teens Grow from the Inside Out by @DrPriceMitchell If you question today’s notions of success and wonder how adults really affect the growth and well-being of today’s digital generation, download this free eBook by developmental psychologist, Marilyn Price-Mitchell, PhD. Price-Mitchell makes an argument that measuring success by grades and test scores alone is not enough. In fact, it is a practice that is hurting our children. How do we instill the types of skills and abilities that cannot be measured by numbers, including effort, critical thinking, collaboration, respect, caring, honesty, open-mindedness, initiative, and imagination? Discover how children learn to be successful by developing an internal compass that guides them through life. Please return to share your thoughts and comments!

Vitamin C mega-dosing continues to unleash healing miracles around the world (NaturalNews) Remember the story of Alan Smith from New Zealand, and his dramatic recovery from a coma with mega-dose vitamin C? That story went viral and was featured in the New Zealand version of "60 Minutes." But some sources didn't have it quite right. The mega-dose vitamin C was not by IV for the last two weeks. Alan pulled out of his coma from white-out pneumonia (lungs whited out in X-rays) and complications with leukemia. The doctors complied at first, and there was enough improvement to convince the hospital staff not to pull the plug on his life support as they had threatened. Alan Smith only began to improve after taking Lypo-Spheric packets.You can view the first segment of the 60 Minutes Alan Smiths story here ( So how did six grams per day of a special vitamin C oral compound manage to do the work of 50 to 100 grams of IV C daily? Dr. Sources for this article include Dr.

Grammys 2014: Here Are The Nominees Jay Z ended Friday's "Grammy Nominations Concert Live" event with nods in nine categories, leading the pack for the 56th Grammy Awards, which will air Jan. 26 on CBS. Up for seven nominations each are Kendrick Lamar, Macklemore and Ryan Lewis, Pharrell Williams and Justin Timberlake. Drake and Bob Ludwig snagged five nods, while Daft Punk, Lorde, Bruno Mars, Kacey Musgraves and Taylor Swift earned four nominations. The veteran rapper came out on top on the strength of his 12th studio album, Magna Carta Holy Grail. This year, Jay Z gave away one million copies of the album, purchased for $5 each by Samsung, to one million Samsung Galaxy owners, who had to download an app to snag a copy. To be eligible this year, recordings had to be released from Oct. 1, 2012, to Sept. 30, 2013. Album Of The Year The Blessed Unrest — Sara BareillesRandom Access Memories — Daft PunkGood Kid, M.A.A.D City — Kendrick LamarThe Heist — Macklemore & Ryan LewisRed — Taylor Swift Record Of The Year Song Of The Year

GIANT ROBOT FINGER ASSEMBLY NOTE: There are 3 levels of difficulty - -from a simple one-piece finger, to a whole hand -- depending how far you go in the instructions. Going to Step 4 will give you a basic finger with one tendon. That's enough to get the point about how tendons work. Going on to Step 5 will get you a finger with opposing tendons. What you need: string You will need about 2 feet per finger. thin cardboard I use cereal boxes to recycle them, but you can use "poster board." scissors, tape, (ruler, optional) Either clear tape or masking tape will work. Step 1 Cut out the cardboard using the pattern, Click here and print out the pattern page. Roll 4 pieces of tape into circular "doughnuts" with the sticky side out. Notice that there are two kind of lines on the pattern: solid lines (shown in blue in the illustration) and dashed lines (shown in green in the left illustration). Cut on the solid lines. Step 2 Fold on the dashed lines. Step 3 Shape and tape into a 3-dimentional object. Step 4 Tape on the string. Step 5