What we're getting wrong in the conversation about mental health. Many years ago, in the fading hours of a house party, I sat outside in the garden with an old friend. 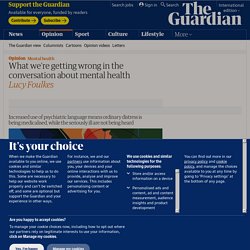 From inside came the distant thud of music and pockets of laughter – a thousand miles from the conversation we were having. From surviving to thriving: how advice given to parents inside schools can transform lives. 'We're always there for them': is the tide turning against zero-tolerance in UK schools? Sixth former Amy Fielding*, with her dreams of becoming a lawyer and her hard work for her A-levels, has the air of a determined young woman at the pinnacle of a successful school career. 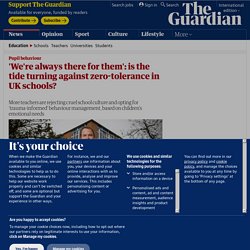 Yet only two years ago, her teachers say, Amy was a “challenging tearaway” doing all the things that in many schools would lead to permanent exclusion. But Amy’s school, George Green’s in Tower Hamlets, didn’t exclude her. Its leadership team, determined to bring down exclusions rates, committed themselves to keeping her in school. She has benefited from a radically different approach to managing behaviour, based on understanding pupils’ personal circumstances and helping them to overcome the impact of traumatic experiences in early life, or outside school, that may be affecting their behaviour – such as abuse, neglect, domestic violence and family breakdown. The rugrat race - Working-class parents are becoming more like middle-class ones.

LIKE MANY children around the age of two, Madison has decided not to do what her mother wants. 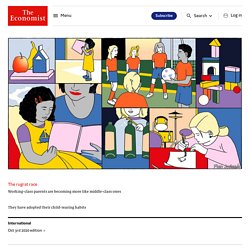 She will not speak above a whisper. She does not want to read “Big Red Barn”. Instead of rote learning useless facts, children should be taught wellbeing. In his treatise on the future of humanity, 21 Lessons for the 21st Century, the philosopher-historian Yuval Noah Harari offers the young people of today some advice. 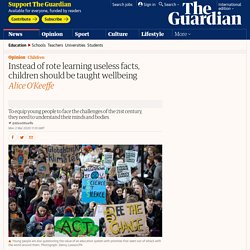 In order to survive and thrive in adulthood, they should not rely on traditional academic skills such as solving equations or learning computer code. These will soon become obsolete in a world in which computers can perform such techniques more quickly and accurately than humans. One in four young people with mental health referral 'rejected' One in four children and young people referred to mental health services in England last year were not accepted for treatment, according to data, raising concerns that many are still failing to get vital support at an early stage. 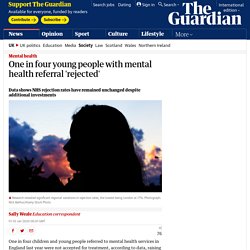 Research by the Education Policy Institute (EPI) estimated that more than 130,000 of those referred to specialist services in 2018-19 were “rejected”, among them young people who have self-harmed, suffered eating disorders and experienced abuse. According to the EPI, rejection rates have remained unchanged over the last four years, despite government commitments to address shortages in child and adolescent mental health services (CAMHS), including an additional £1.4bn investment between 2015 and 2021. The research also revealed significant regional variations, with services in London rejecting 17% of referrals on average, compared with 28% in the south, the Midlands and the east, and 22% in the north.

‘The way universities are run is making us ill’: inside the student mental health crisis. When he started working at Brunel University London 19 years ago, Terry Vass, who is now head of security, recalls that most of his work involved breaking up drunken fights outside the bars and nightclub on campus. 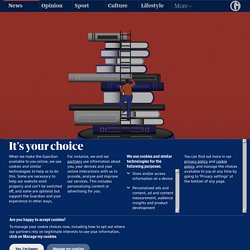 Over the two decades he has been in the job, he has noticed a shift. Now, an increasing number of calls are for mental health incidents. The worst times are at the start of term, when students are adjusting to being away from home, or over the holidays, when the small number who remain on campus may feel lonely and isolated. Increasingly, Vass’s security team are called out to mental health emergencies, sometimes accompanying suicidal students to A&E and staying with them. How to make social media safe for children - Kids aren’t alright. Teen suicides rose after Netflix's 13 Reasons Why aired, US study shows. A new study has found that suicide among teenagers rose by 28.9% in the month after Netflix launched 13 Reasons Why. 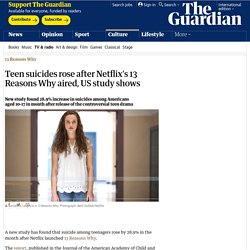 The drama, about the suicide of a high school student and the effect her death has on her classmates, was condemned upon release by mental health campaigners and psychiatrists. Experts claimed that the show romanticised suicide and could lead to copycat behaviour. While there’s no direct causation cited in the report, the unprecedented rise has left cause for concern. “The results of this study should raise awareness that young people are particularly vulnerable to the media,” said the study’s coauthor Lisa Horowitz, a scientist at the National Institute of Mental Health, in a statement. Technology cuts children off from adults, warns expert. One of the world’s foremost authorities on child mental health today warns that technology is threatening child development by disrupting the crucial learning relationship between adults and children. 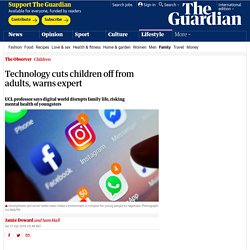 Peter Fonagy, professor of Contemporary Psychoanalysis and Developmental Science at UCL, who has published more than 500 scientific papers and 19 books, warns that the digital world is reducing contact time between the generations – a development with potentially damaging consequences. Fonagy, the chief executive of the Anna Freud National Centre for Children and Families – a mental health charity – has spent more than half a century studying child development. He says that emotional disorders among young women aged 14 to 19 have become “very much more common”, while A&E admissions for self harm have increased massively. More recently he has also become concerned about a spike in violence among boys. Levels of distress and illness among students in UK 'alarmingly high' A poll of almost 38,000 UK students suggests rates of psychological distress and illness are on the rise in universities, with “alarmingly high” levels of anxiety, loneliness, substance misuse and thoughts of self-harm. 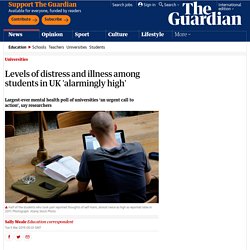 Researchers say the report, seen exclusively by the Guardian, is the largest mental health survey ever conducted among UK university students, and its findings constitute “an urgent call to action”. The findings were based on responses from a self-selecting sample of students who took part in an online survey. Among the key findings likely to prompt concern among parents and those responsible for student welfare were those on self-harm. Governor of child gender service quits over damning report. The trust running the country’s only NHS gender identity service for children is under fire for dismissing a damning internal report that branded it “not fit for purpose”. 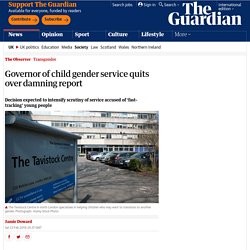 Marcus Evans, one of the governors of The Tavistock and Portman NHS Foundation Trust has resigned, after accusing its management of having an “overvalued belief in” the expertise of its Gender Identity Development Service (GIDS) “which is used to dismiss challenge and examination”. Bedtime social media use may be harming UK teenagers, study says. Teenagers in Britain may be putting their health and education at risk by spending too much time on social media at bedtime, according to a major study into adolescent sleep habits. More than a third of teenagers spent at least three hours a day on social media, with a fifth devoting at least five hours to the activity, researchers found. One in 13 teenagers has experienced PTSD, research finds. Of all 18-year-olds in England and Wales one in 13 have had post-traumatic stress disorder at some point, half of those within the previous 12 months, researchers have said. The study’s findings have been met with alarm among experts, who raised concerns that few of the young people who experienced trauma accessed support for their mental health from medical professionals.

Andrea Danese, co-author of the research from King’s College London, said: “Trauma is really a public health concern, it is very prevalent.” He added that it is not only associated with developing PTSD and other mental health conditions, but also linked to self harm and suicide, and can have a profound effect on education and work. Revealed: asthma’s deadly toll on young people in the UK. Young Britons are dying from asthma at a higher rate than any of the other European countries examined in a new study, researchers have revealed.

Experts have found the UK is languishing near the bottom of an international league table for a host of problems, including obesity, lack of exercise in children and the burden of chronic health issues – and in many cases the situation is getting worse. “Young people’s health is not high enough up the policy agenda,” said Ann Hagell, a co-author of the report from the Association for Young People’s Health, which published it with the Nuffield Trust. Hagell said that was partly because the age group was largely seen as being fit and healthy, despite the report revealing almost 20% of 16- to 24-year-olds in the UK are living with a chronic health problem. Many services that benefit young people, including school nurses and sexual health services, have seen substantial cuts.

Blaming social media for child angst? It’s only half the picture. Nothing turns a parent’s heart inside out like the unhappiness of a child, and your own helplessness in the face of it. When they were tiny, it was all so much easier. Toddlers can turn from sunny to inconsolable in a second, but are equally miraculously restored by a nap or a box of raisins. The unhappiness of an older child, however, is infinitely more frightening. Blaming Instagram is too easy: politicians must do more to help teens. 'Deep breath, cup of tea, long walk': nine ways to stay calm in a crisis. Why Dutch teenagers are among the happiest in the world. Depression in girls linked to higher use of social media. Girls’ much-higher rate of depression than boys is closely linked to the greater time they spend on social media, and online bullying and poor sleep are the main culprits for their low mood, new research reveals.

Exam stress creating 'troubled generation', says ex-civil service chief. An “addiction to exams” is fuelling stress, anxiety and failure in schools across the UK, the former head of the civil service has said. Schools can’t be substitute parents, Ofsted chief warns. Parents must not “abdicate their responsibility” by expecting schools to solve all the major problems children face, the chief inspector for schools will warn this week. Don't blame social media for austerity's ills, parliament told. The African youth boom: what's worrying Bill Gates. What worries Bill Gates most? The booming population of Africa looms over his foundation’s latest global survey. At 18, She Survived a Suicide Attempt. Hear What She Has to Say. Mental health crisis in teens is being magnified by demise of creative subjects in school. After the recent report by The Children’s Society that a quarter of 14-year-old girls have self-harmed, many campaigners have called for the root causes of the adolescent mental health crisis to be tackled – rather than just firefighting the symptoms.

Schools inspector threatens D-minus for ‘exam factories’ St Olave’s is not alone. Schools with dodgy practices are everywhere. BBC Radio 4 - Four Thought, Mental Health Crisis? How to survive the teenage years: a parents’ guide. Poorest and brightest girls more likely to be depressed – UK study. Treating young people like criminals actually makes violent crime worse. Digital Resilience Toolkit: What type of parent are you? - Internet Matters. Screen teenagers annually for depression, say US doctors. Troubled children at risk from mental health proposals, warn therapists. Johann Hari: ‘I was afraid to dismantle the story about depression and anxiety’ In British education, the central issue is class, not ethnicity. How resilient do we want our children and young people to be? In response to the government's mental health plan for counselling in schools, a graph demonstrating the social gradient of childhood mental…

Systematic review: Stanley N, Ellis J, Farrelly N, Hollinghurst S, & Downe S. (2015). Preventing domestic abuse for children and young people: A review of school-based interventions. Children and Youth Services Review, 59, 120-131. Social and Emotional Education and Development. Inspiring video series for all parents of teens. Article: why Are teens so moody and impulsive? This neuroscientist has the answer. Opinion: why ignoring mental wellbeing may be detrimental to public health.