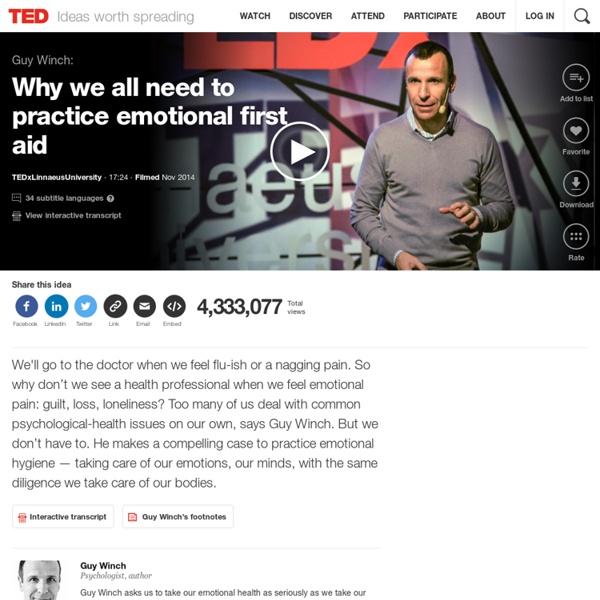 We'll go to the doctor when we feel flu-ish or a nagging pain. So why don’t we see a health professional when we feel emotional pain: guilt, loss, loneliness? Too many of us deal with common psychological-health issues on our own, says Guy Winch. But we don’t have to. He makes a compelling case to practice emotional hygiene — taking care of our emotions, our minds, with the same diligence we take care of our bodies. This talk was presented to a local audience at TEDxLinnaeusUniversity, an independent event.

Gary Hamel: Reinventing the Technology of Human Accomplishment Watch Gary Hamel, celebrated management thinker and author and co-founder of the Management Innovation eXchange (MIX), make the case for reinventing management for the 21st century. In this fast-paced, idea-packed, 15-minute video essay, Hamel paints a vivid picture of what it means to build organizations that are fundamentally fit for the future—resilient, inventive, inspiring and accountable. "Modern” management is one of humanity’s most important inventions, Hamel argues. But it was developed more than a century ago to maximize standardization, specialization, hierarchy, control, and shareholder interests. This video is an excerpt from the University of Phoenix Distinguished Guest Video Lecture Series.

Powerfully Sober: You’d Better Work That Mind! Our mental health can make or break recovery. If we want to stay sober, we’ve got to find ways to be mentally strong. And let’s not sugarcoat the situation; the path to lasting sobriety won’t be easy. ?tag=nl The future of wearables, which includes activity trackers, smartwatches, smartglasses and embedded sensors in clothing, is quickly evolving and changing to reflect technological advances and new products available in the marketplace. At CES 2016, there was a plethora of wearable devices dominating the scene, particularly fitness trackers, sensors, smartwatches, virtual reality and augmented reality headsets, also known as smartglasses. Health-related wearables, particularly those for seniors and babies, and for monitoring sleep and health conditions, constituted a large segment of the new devices on display. Several industry experts shared their predictions on what we can expect to see in the next 12 months in each of these categories.

?tag=nl Microsoft has published detailed instructions on how to stop your computer from trying to upgrade itself to Windows 10. The walkthrough will allow IT admins both to opt out of the automatic upgrade to Windows 10 and disable the Get Windows 10 icon from showing on the taskbar. The guide, published here, details how to install and configure a Group Policy Object to block the upgrade options. The policy settings can be enabled by users running Windows 7, Windows 7 for Embedded Systems, Windows 8.1, and Windows Embedded 8.1 Pro. The configuration changes reportedly work, although there is always a chance that future changes may re-enable the Get Windows 10 app, which nags users of Windows 7 and 8 to upgrade.

6 Photographers Asked to Shoot Portraits of 1 Man... With a Twist Canon recently conducted an interesting experiment on the power of perspective in portrait photography. They enlisted the help of 6 photographers and asked them each to independently shoot portraits of a man named Michael. But there was a twist: each photographer was told a different thing about Michael’s background. The photographers were told that Michael was: a self-made millionaire, someone who has saved a life, an ex-inmate, a commercial fisherman, a self-proclaimed psychic, and a recovering alcoholic.

Your Brain Has A "Delete" Button Will wearing a ratty college T-shirt and sweats to bed soon go out of fashion? The pajamas industry is growing, and retailers aren't sleeping on how to reinvent the bygone ensemble. What was once a symbol of buttoned-down '50s attire (think Ricky and Lucy in collared PJ sets, tucking into their separate beds) has slowly inched its way back into pop culture. Look no further than popular TV shows—New Girl, House of Cards, or Scandal—to see protagonists clad in chic silk or cotton designs reminiscent of a tidier bedtime era. lifehack To My Love, I have made of you a habit, my dear. A habit formed with words. I said those three words at first, when our relationship was almost old and nearly new, because that first time was the magical time that made it all come true for me.

8 Signs of a Man Who Will Never Ever Stop Loving You We men sometimes get a bad rap. The stereotypical “man” doesn’t do any of the following. However, the only men who are actually like this are created by writers as sitcom fodder (hopefully). In truth, when a man finds the person he knows he’ll be spending the rest of his life with, he’ll certainly work his hardest to keep them by his side at all times. lifehack Some people don’t like commitment. Some are poor at communicating while others are afraid to share how they feel. It’s easy to get discouraged when you’re unsure of how your partner really feels about you.

Children's media culture, media literacy, and media criticism “Have courage, and be kind.” This sentiment recurs throughout Disney’s new live-action Cinderella. From the moment Ella’s dying mother offers her this advice, it becomes the driving force in Ella’s life and the through-line in her characterization by actress Lily James. Imbuing Cinderella with courage and kindness has a purpose: Director Kenneth Branagh uses it to give 2015’s Cinderella more agency than her cartoon predecessor from 1950. After all, in the broader media culture, bold, empowered young women are on trend (think Frozen’s Anna and Elsa, Brave’s Merida, and Hunger Games’ Katniss Everdeen). Passive victims like Cinderella, Snow White, and Sleeping Beauty are passé, out of step with modern values.

10 Ways To Teach Your Kids To Have A Fearless Mindset As a parent, you want your kids to grow up to be confident, happy, and successful adults, able to face the world head-on and make the most of every opportunity. But what can you do to help them overcome the fears that might hold them back? It’s worth remembering first that fear serves a purpose; it’s a natural human emotion to warn us of possible harm – a call to action to protect ourselves. However, in our modern world, fear often tends to be out of proportion to risk and can prevent us from achieving as much as we would like, and are capable of. Here are 10 ways to help your kids develop a fearless mindset and overcome the fears that are holding them back. 1.