Sex, social media and the pressure on teenage girls. GWEN IFILL: In the eight years since Apple unveiled its first smartphone, an entire generation of young users has spring up who never knew a world without a device in hand. 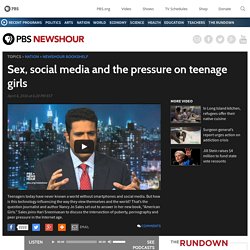 That’s the starting point for the latest addition to the “NewsHour” Bookshelf, “American Girls: Social Media and the Secret Lives of Teenagers,” by journalist and author Nancy Jo Sales. Teenage Girls In Australia Feel A Greater Pressure To Have Sex Than Girls In Other Countries - Junkee. Meanwhile, Labor has officially killed off the plebiscite. 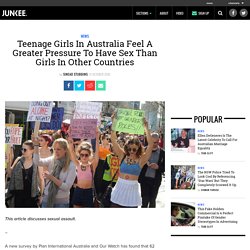 Last night the federal government finally released a copy of the marriage equality bill it would attempt to pass in the event of a successful plebiscite. Girls as young as 7 feel pressure to be pretty – body confidence study. A third of seven- to 10-year-old girls believe that they are judged on their appearance and a quarter feel the need to be perfect, according to a study by Girlguiding UK. 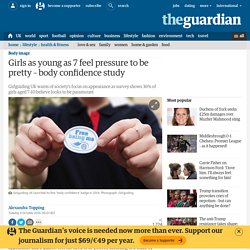 The charity’s annual girls’ attitudes survey, published on Tuesday, found that girls were suffering from a crisis in body confidence, with 61% of those aged seven to 21 feeling happy with how they look, down from 73% in 2011. The study – the largest annual research of its kind – suggests that girls as young as seven feel under pressure to be pretty. More than a third (35%) of seven- to 10 year-old girls agreed that women were rated more on their appearance than their abilities, and 36% said they were made to feel their looks were their most important attribute.

Campaigners said the findings showed the need to combat the “objectification and harassment … ruining girls’ lives”. The survey also revealed low levels of body confidence among girls. Cynthia Nixon reveals the pressure to be perfect while filming Sex And The City. Cynthia Nixon has revealed she felt pressure to be 'thin and look great all the time' on Sex and the City. 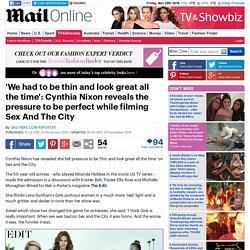 The 50-year-old actress - who played Miranda Hobbes in the iconic US TV series - made the admission in a discussion with Kristen Bell, Tracee Ellis Ross and Michelle Monaghan filmed for Net-a-Porter's magazine The Edit. She thinks Lena Dunham's Girls portrays women in a much more 'real' light and is much grittier and darker in tone than her show was. Asked which show has changed the game for actresses, she said: 'I think Girls is really important. When sex was bad on Sex and the City it was funny. Empowering Young Girls With Bright Lite Magazine. My whole life changed when I had my daughter three years ago. 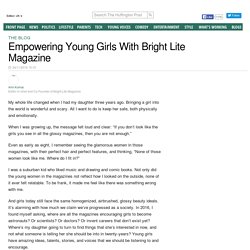 Bringing a girl into the world is wonderful and scary. All I want to do is keep her safe, both physically and emotionally. When I was growing up, the message felt loud and clear: “If you don’t look like the girls you see in all the glossy magazines, then you are not enough.” Even as early as eight, I remember seeing the glamorous women in those magazines, with their perfect hair and perfect features, and thinking, “None of those women look like me. Why we are the key to helping young girls accept their looks. We thought we had it tough, us Generation X-ers, growing up with the size 0 debate raging around us and Heat magazine’s Circle Of Shame. 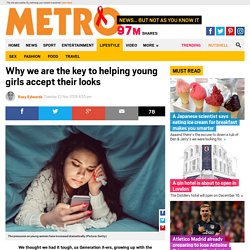 How tame it all seems now. In their 2016 Good Childhood report, the Children’s Society stated that: ‘14% of 10 to 15-year-old British girls are unhappy with their lives as a whole and 34% with their appearance’. Statistics are tossed around so often that it is easy to become inured to the meaning behind the figures, so to ensure that doesn’t happen: we have 10-year-old girls in our society that think they are ugly. ‘This finding should be a real cause for concern,’ says Peter Grigg, External Affairs Director for The Children’s Society. Miss Phenomenals project to empower young girls. “We would also coach those young girls about life. 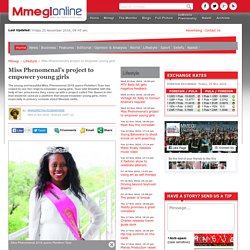 We will be having girl talks with them and discuss challenges that they face as adolescents. We will advice them on how to tackle those challenges because we are more experienced than them. We want those young girls to be women of virtue,” she said. Daughter debates: Should young girls wear make-up out the house? - Al Arabiya English. LGBT bullying at 'high rate' in Scotland's schools. Image copyright AFP Lesbian, gay, bisexual and transgender (LGBT) pupils are still experiencing high rates of bullying in schools, according to campaigners. 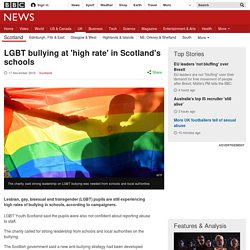 LGBT Youth Scotland said the pupils were also not confident about reporting abuse to staff. The charity called for strong leadership from schools and local authorities on the bullying. The Scottish government said a new anti-bullying strategy had been developed with LGBT organisations. UK to censor online videos of 'non-conventional' sex acts. Web users in the UK will be banned from accessing websites portraying a range of non-conventional sexual acts, under a little discussed clause to a government bill currently going through parliament. 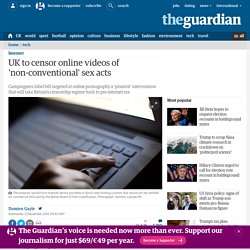 The proposal, part of the digital economy bill, would force internet service providers to block sites hosting content that would not be certified for commercial DVD sale by the British Board of Film Classification (BBFC). It is contained within provisions of the bill designed to enforce strict age verification checks to stop children accessing adult websites. 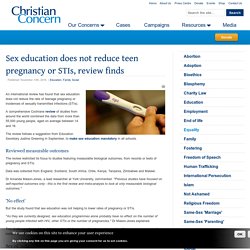 A comprehensive Cochrane review of studies from around the world combined the data from more than 55,000 young people, aged on average between 14 and 16. The review follows a suggestion from Education Secretary Justine Greening in September, to make sex education mandatory in all schools. Reviewed measurable outcomes The review restricted its focus to studies featuring measurable biological outcomes, from records or tests of pregnancy and STIs. Data was collected from England, Scotland, South Africa, Chile, Kenya, Tanzania, Zimbabwe and Malawi. Dr Amanda Mason-Jones, a lead researcher at York University, commented: "Previous studies have focused on self-reported outcomes only - this is the first review and meta-analysis to look at only measurable biological outcomes.

Sex education is failing to improve teenage sexual health or cut pregnancies, scientists warn. Compulsory sex education in schools call from Darlington's Youth MP. Please sign in or subscribe to read more articles “ Unrivalled journalism and local news coverage, wherever and whenever you need it, in a format to suit you. The Editor, The Northern Echo Please enable cookies to read the full article. You've read articles in the last 30 days. Teens 'drink enough sugar for cola bath' The Art of Eating. Naked Wants to Change the Weight Loss Game With a 3D Home Body Scanner. The latest innovation in Silicon Valley comes in the form of a sci-fi-like magic mirror. Dubbed “Naked,” the 3D fitness tracker wants to change the body measurement game by offering users the ability to determine their own body fat measurement from home. The device works through a series of Intel RealSense Depth Sensors, which scan your body while the Bluetooth-connected scales act as a turntable.

The end result is a full 3D scan of your body in 20 seconds. All of the information is then delivered to you through an accompanying app, letting you track your body’s changes over time. The scanner also gives you a “heat map,” which shows you exactly where your body is growing muscle or gaining fat in real time. Turn your iPhone into a health test - The Tinké. If keeping track of your stress and fitness levels is at the top of your priority list design firm Zensorium offers a clever little tool to tell you where you stand at any given moment. The Tinké plugs into the bottom of your device and offers readings for your heart rate and rhythm as well as respiratory rate and blood oxygen levels. A simple pinch of the pad detects changes in skin blood volume and gives the results in their Vita or Zen index. 1Rebel Luxury Boutique Gym Opens in London.

The Punching Bag Computer Makes Users Throw Uppercuts and Jabs to Type Letters. District Vision Eyewear Makes Sunglasses for Runners. In response to the burgeoning fitness community, District Vision have designed a collection of performance eyewear that is perfect for runners and other active individuals. Each model is a marriage of style, comfort and performance, with three frames and three lens colors being presented, all of which were made in Japan. How Hipster Food Trends Are Ruining the World. The V word: "Veganism seems to have passed a tipping point and is unstoppable now" It’s become one of Britain’s fastest growing lifestyle movements.

Molecules found on phones reveal lifestyle secrets. These anti-odour fitness clothes can stop you smelling after a workout.