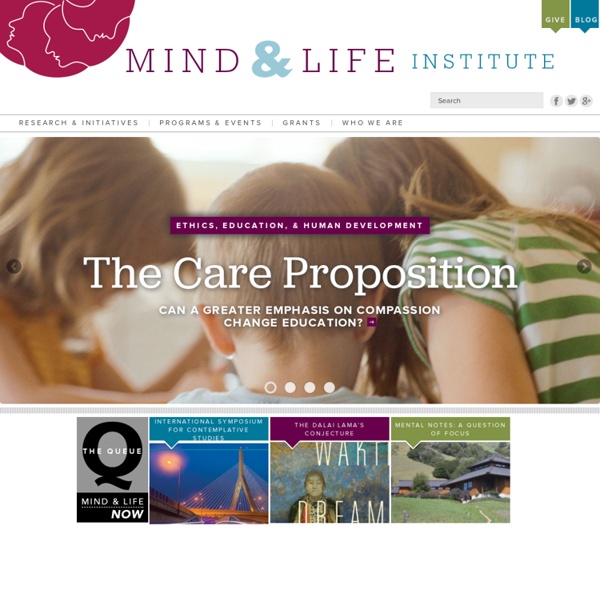 Mind & Life Institute Building a scientific understanding of the mind to reduce suffering and promote well-being Thank You from the Mind and Life Visiting Scholars Watch the video now. Explore Conferences & Events

Ven. Bhikkhu Bodhi Bhikkhu Bodhi is an American Buddhist monk from New York City. Born in Brooklyn, New York, in 1944, he obtained a BA in philosophy from Brooklyn College (1966) and a PhD in philosophy from Claremont Graduate School (1972). Drawn to Buddhism in his early 20s, after completing his university studies he traveled to Sri Lanka, where he received novice ordination in 1972 and full ordination in 1973, both under the late Ven. Ananda Maitreya, the leading Sri Lankan scholar-monk of recent times. He was appointed editor of the Buddhist Publication Society (in Sri Lanka) in 1984 and its president in 1988.

» Be able to walk away In any kind of negotiation, your ability to walk away is your strongest tool. Those who can walk away from the negotiation — legitimately walk away, not just make a show of it — are in the strongest position. Those who are convinced they need to make the deal are in the weakest position. This is true of negotiating when you’re buying a car, closing the sale of your new home, haggling in a foreign flea market, or trying to get a raise. It’s also true of anything in life. Know that there’s almost nothing you can’t walk away from.

Society for Psychical Research President Richard Broughton, Ph.D. An early interest in what might be called the higher powers of the mind associated with mystical states was transformed into a quest to understand how these unusual abilities work by an article by Lawrence LeShan that later became part of his book The Medium, the Mystic, and the Physicist. This led Richard in 1973 to pursue a PhD in psychology at the University of Edinburgh where he studied under John Beloff and began his association with the SPR on becoming a member and publishing his first scientific papers in the Journal. Following appointments at the University of Utrecht and the State University of New York, Richard joined the Institute for Parapsychology (successor to the famous Duke University Parapsychology Laboratory and now known as the Rhine Research Center) in Durham, North Carolina, where he eventually served as director for five years. Vice Presidents

Flaneur Magazine »Rome is so boring, Rome is so dry.« Architectural performance group LAC, ATI and Stalker believe the answer to Rome’s future is the transformation of the ancient ruin Largo Argentina (located on Corso Vittorio Emanuele II) into a lake. Let the Romans swim! Let Romans touch their history instead of viewing it from afar! After several brainstorming sessions (scuba diving gear, crabs and safety floats being mentioned) Flaneur and the performers/architects met by the ruin armed with flyers, posters, empty vessels for collecting water and a model of the ruin-turned-lake including live gold fish.

Handbook for Life: 52 Tips for Happiness and Productivity By Leo Babauta This is something I’ve been wanting to write for some time — a Handbook for Life. Now, is there any handbook that can be a guide to every single person? Of course not. This is just a list of tips that I think will help many people in life — some of them common-sense tips that we often forget about. Consider this guide a reminder. GCP Results A Bottom Line Graph pictures the history of accumulated deviations from expectation. The Hypothesis Registry defines formal events. Analyses are linked from Table 2 below. Exploratory Studies My Story — ShamashAlidina.com Shamash was born and raised in North London to Indian parents. “As a kid I was really into science. I loved making robots and fiddling with chemistry sets. It was no surprise that I went to university to study chemical engineering – to the delight of my parents. It was almost as if my life was already mapped out for me."

Taki's Magazine - Home Page Most Popular Injured Parties Are Jews Losing Control of the Media? The Wrong Body Language Never look away from your audience. In the outside world you may multitask and look at your Blackberry while ordering a latte, but never lose eye contact with those who have come to hear you speak. Eye contact helps you connect to people and enhance feelings of trustworthiness and likeability. Fidgeting with your hands is distracting. Don’t clap, knuckle crunch, or cuticle pick. Unless you are pointing to something in your presentation or making a big movement, keep your hands by your side. Overview From its inception, the Institute of Noetic Sciences has blazed new trails in exploring big questions: Who are we? What is consciousness, and how does it impact the physical world? What are our human potentials, and how can we achieve those potentials?

Joe Nolan's Insomnia Halloween Rising For this latest spooky October post, I’ve grown a little bit impatient with the month and I want to cut to the chase. Here’s a nice little primer on the Celtic roots of the Halloween holiday and its evolution through the ages to the seemingly silly, scary celebration we know today. Do the souls of the… Read More » Loving the Alien

The Hard Truth About How Success Really Works Many people fall prey to, “Yeah, but...” thinking. I have a friend who absolutely hates how successful his brother-in-law has become. “Oh yeah, I’d like to be doing that well,” he’ll say, “but he has very little downtime.” Another is bitter because one of his friends is extremely fit. “Oh yeah, I’d like to be in that kind of shape,” he’ll say, “but he has to run like 30 miles a week.”