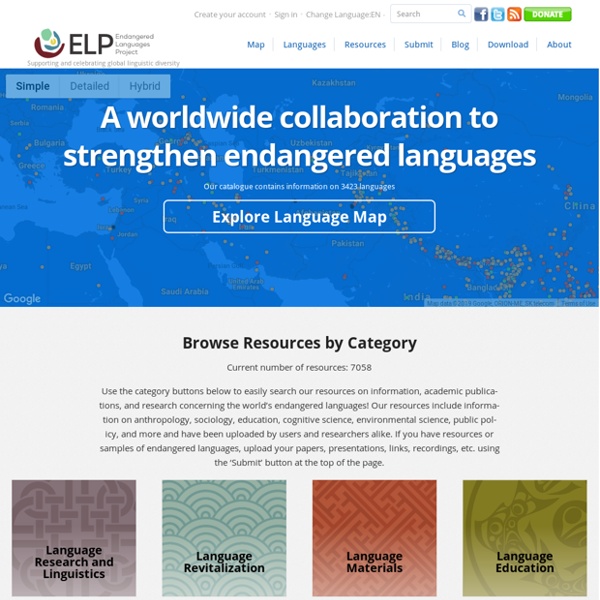 Language Trainers USA Blog Source: muturzikin.com I stumbled upon this fascinating site recently – muturzikin.com – the webmaster of which draws linguistic maps displaying different languages and dialects across continents. I always knew that there were plenty of different American English dialects across our country, but I didn’t expect quite so much detail on a map of the USA. Click on the image below to see the full sized version – be warned, however, the full sized .png is huge (3567×1878, 301Kb), so you might want to open it and then right click -> save it to your computer and view it that way.

Atlas of languages in danger 8 July 2016 in Beijing, People’s Republic of China UNESCO and Talkmate host an official launch event to celebrate the beginning of a new and exciting partnership on the development of the World Atlas of Languages. The joint partnership aims at developing innovative and scalable ICT-supported models to access data on linguistic diversity around the world, encourage collaboration among different stakeholders and raise awareness on the importance of linguistic diversity and multilingualism for sustainable and inclusive development. Building on the existing UNESCO’s Atlas of Languages in Danger, a new online collaborative platform “World Atlas of Languages” will provide a wide range of technical and collaborative facilities to all stakeholders to access and share own data on linguistic diversity, information about good practices, existing language teaching and learning solutions, and host user-generated content. Agenda (PDF)

The history of the paper clip: It was invented in 1899. It hasn’t been improved upon since Getty Images/BananaStock via Thinkstock. The paper clip is something of a fetish object in design circles. Its spare, machined aesthetic and its inexpensive ubiquity landed it a spot in MoMA’s 2004 show Humble Masterpieces.

FASTEN SEAT BELTS 2 - Travel by Continent - Europe Fasten Seat Belts, a light hearted guide to avoid misunderstandings while travelling. An innovative way to learn languages and pick up cultural tips. Travel by Continent / Europe In the Netherlands, it is the custom on someone's birthday to... Gifts, Miscellaneous, Do's & Don'ts, Netherlands Grec AP Grammar: A Matter of Fashion Draft is a series about the art and craft of writing. “Much was said, and much was ate, and all went well.” Clearly this sentence was written by a fourth grader – or at best someone not ushered into acquaintance with “proper” grammar. Like, say, Jane Austen? That’s straight out of her novel “Mansfield Park.”

IndoEuropean Origins - GeoCurrents Mismodeling Indo-European Origin and Expansion: Bouckaert, Atkinson, Wade and the Assault on Historical Linguistics Dear Readers, As GeoCurrents passed through its August slowdown, plans were made for a series on the Summer Olympics. Thanks to the efforts of Chris Kremer, we have gathered statistics—and made maps—relating Olympic medal count by country to population and GDP, both overall and in regard to specific categories of competition. Migration Migration is one of the political priorities of the Juncker Commission. The main aim is to approach the issue in a comprehensive way. The Commission's agenda on migration defines immediate measures needed to prevent human tragedies and to strengthen emergency responses.

7 Outstanding YouTube Channels for History Teachers Educational Technology and Mobile Learning has recently started featuring some educational YouTube channels pertaining to different subject matters. Up to this moment, we have covered channels for Math, Science, and yesterday we posted a list of channels for kids. The purpose behind such collections is to help teachers and educators have instant access to educational videos they might need to use with their students. The channels we post are among the top ones you can find on YouTube and some of them are created by teachers like you and me. European Maps Showing Origins Of Common Words U.S. playwright Rita Mae Brown said: "Language is the road map of a culture. It tells you where its people come from and where they are going." That quote comes to mind looking at these fascinating European etymology maps of various commons words posted by reddit user sp07, which provide a kind of cultural commentary on Europe. The word for "church" shows the influence of ancient Greece: imgur/u/Bezbojnicul "Bear" appears to be influenced by Russia, where largest brown bear population in Europe can be found.

About this project The Endangered Languages Project, is an online resource to record, access, and share samples of and research on endangered languages, as well as to share advice and best practices for those working to document or strengthen languages under threat. by angel_aldana Jan 11