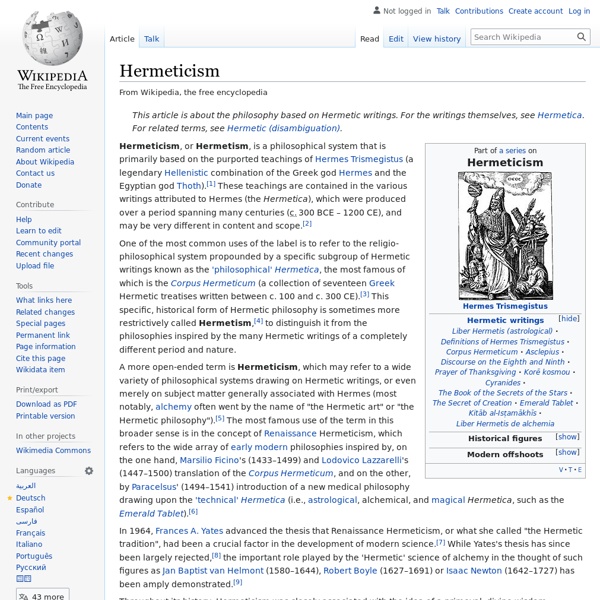 Not to be confused with Hermit. Hermeticism, also called Hermetism,[1][2] is a religious and philosophical/esoteric tradition based primarily upon writings attributed to Hermes Trismegistus ("Thrice Great").[3] These writings have greatly influenced the Western esoteric tradition and were considered to be of great importance during both the Renaissance[4] and the Reformation.[5] The tradition claims descent from a prisca theologia, a doctrine that affirms the existence of a single, true theology that is present in all religions and that was given by God to man in antiquity.[6][7] Many Christian writers, including Lactantius, Augustine,[8] Thomas Aquinas[citation needed], Marsilio Ficino, Giovanni Pico della Mirandola, Giordano Bruno, Campanella, Sir Thomas Browne, and Emerson, considered Hermes Trismegistus to be a wise pagan prophet who foresaw the coming of Christianity.[9][10] History[edit] Late Antiquity[edit] Renaissance[edit] Philosophy[edit] Prisca theologia[edit] "As above, so below."

Hermes Trismegistus Purported author of the Hermetic Corpus Hermes Trismegistus (Ancient Greek: Ἑρμῆς ὁ Τρισμέγιστος, "thrice-greatest Hermes"; Latin: Mercurius ter Maximus) is the purported author of the Hermetic Corpus, a series of sacred texts that are the basis of Hermeticism. Origin and identity[edit] Jordan - History - The Islamic Periods and the Crusades The Byzantines’ preoccupation with the Sassanians diverted their attention away from what was happening in the Arabian desert. For countless years marauding Bedouin tribesmen had periodically staged raids to the north. What was new, however, was that the Arabs who swept northward on horse and camel-back were now united by a common faith, that of Islam. After hearing the call of God, the Prophet Muhammad, Praise Be Unto Him (PBUH), first tried to convert the people of his home, Mecca.

Upajjhatthana Sutta The Upajjhatthana Sutta ("Subjects for Contemplation"), also known as the Abhiṇhapaccavekkhitabbaṭhānasutta in the Chaṭṭha Saṅgāyana Tipiṭaka, is a Buddhist discourse (Pali: sutta; Skt.: sutra) famous for its inclusion of five remembrances, five facts regarding life's fragility and our true inheritance. The discourse advises that these facts are to be reflected upon often by all. According to this discourse, contemplation of these facts leads to the abandonment of destructive attachments and actions and to the cultivation of factors necessary for Awakening. According to the Ariyapariyesana Sutta (Discourse on the Noble Quest) MN 26,[1] the first three remembrances are the very insights that led Gautama Buddha to renounce his royal household status and become an ascetic after experiencing strong feelings of spiritual urgency (saṃvega). As the 57th discourse of the fifth book of the Pali Canon's Anguttara Nikaya (AN), this discourse's abbreviated designation is AN 5.57 or AN V.57.

Neoplatonism Strand of Platonic philosophy that emerged in the 3rd century AD Neoplatonism is a strand of Platonic philosophy that emerged in the second century AD against the background of Hellenistic philosophy and religion.[1][note 1][note 2] The term does not encapsulate a set of ideas as much as it encapsulates a chain of thinkers which began with Ammonius Saccas and his student Plotinus (c. 204/5 – 271 AD) and which stretches to the 5th century AD. Even though neoplatonism primarily circumscribes the thinkers who are now labeled neoplatonists and not their ideas, there are some ideas that are common to neoplatonic systems; for example, the monistic idea that all of reality can be derived from a single principle, "the One". Neoplatonism had an enduring influence on the subsequent history of philosophy. In the Middle Ages, neoplatonic ideas were studied and discussed by Muslim, Christian, and Jewish thinkers. Origins of the term[edit]

Intellectual dark web Term referring to a group of public personalities who oppose progressive identity politics in the media and academia Definition[edit] Origin and usage[edit] Eric Weinstein, the director of an American venture capital firm, stated that when he coined the term he was "half-joking".[1][7] This occurred after Weinstein's brother, biologist Bret Weinstein, resigned in 2017 from his position as professor of biology at The Evergreen State College in response to protests against his criticism of a campus event that asked white students to stay off campus, as opposed to the previous annual tradition of black students voluntarily absenting themselves.[8] The website Big Think has argued that other controversies, dating back to 2014, should also be viewed as antecedents to the IDW. The term gained traction after a May 2018 opinion piece by then staff editor Bari Weiss in The New York Times titled "Meet the Renegades of the Intellectual Dark Web".

Delphic Maxims The Delphic Maxims are a collection of 147 maxims that are understood to be delivered by the deity Apollo Himself to the Oracle at Delphi, who divinely inspired the Seven Sages, seven early-6th-century BCE philosophers, mystics, politicians, and law-givers, who wrote them down. They are usually identified as: Solon of Athens (c. 638 – 558 BCE) a famous legislator and reformer from Athens, framing the laws that shaped Athenian democracy.Khilon of Sparta (fl. 6th century BCE) a Spartan politician to whom the militarization of Spartan society was attributed.Thales of Miletos (c. 624 – c. 546 BCE) is the first well-known philosopher, mathematician, and astronomer. They provide a framework for life of an honest, worthy way of living.

Bernard Trevisan Bernard Trevisan (Bernard of Treviso, Bernardus Trevisanus) was a fictional Italian alchemist who lived from 1406-1490[1]. His biography has been composed by editors and commentators of alchemical texts from the 16th century. It is said that he was born into a noble family in Padua and spent his entire life spending his family fortune in search of the Philosopher's stone. The mythical character emerged by a confusion with the alchemist called Bernard of Trier. A recent study founded a chronicle of his death in 1387. He has been identified with Eberhard von der Marck-Aremberg (1305-1387), a law graduate and clergyman, who became chorbishop of Cologne[2].

Stanley Keleman Stanley Keleman (November 1931 – August 11, 2018)[1] was an American writer and therapist, who created the body psychotherapy approach known as "formative psychology". He was one of the leaders of the body psychotherapy movement nationally and internationally. His methodology rested on an anatomical base and incorporates an evolutionary, philosophical and mythological perspective; within this formative paradigm the human is capable of learning voluntary self-influence of instinctual and emotional expression as a way to manage dilemmas of daily living and to form personal choices for creating a future. Keleman started developin and articulating his concepts in 1957.

Daedalus Greek mythological figure Family[edit] Mythology[edit] History of Alchemy We take a look at another great influencing character on the golden age of alchemy from the 14th or 15th century. Bernard Trevisan (Bernard of Treviso, Bernardus Trevisanus) refers to one or more Italian alchemists. These are often confused, or more accurately the name may refer to a shadowy figure or figures. Bernard of Trévisan is often confused with two other individuals—Bernardo Trevisano (1652-1720), a Venetian devoted to languages, mathematics, philosophy, and painting, and Bernardinus Trivisanus (1506-1583), who studied arts and medicine at Padua and became professor of logic and medical theory. Biography Trinacria Silver Drachma from Sicily, minted during the reign of Agathocles (361–289 BC), Greektyrant of Syracuse (317–289 BC) and king of Sicily (304–289 BC). Inscription: ΣΥΡΑΚΟΣΙΩΝ ("Syrakosion") Laureate head of the youthful Ares to left; behind, Palladion. Reverse: Triskeles of three human legs with winged feet; at the center, Gorgoneion Three-legged symbol of Sicily depicted as a proto-heraldic device on the shield of a Greek warrior. Greek Red Figure lekythos vase, c.470 BC, found in a tomb near Licata, Sicily.

Eugene Gendlin Eugene T. Gendlin (born Eugen Gendelin; 25 December 1926 – 1 May 2017) was an American philosopher who developed ways of thinking about and working with living process, the bodily felt sense and the "philosophy of the implicit".[1] Though he had no degree in the field of psychology, his advanced study with Carl Rogers, his longtime practice of psychotherapy and his extensive writings in the field of psychology have made him perhaps better known in that field than in philosophy. He studied under Carl Rogers, the founder of client-centered therapy, at the University of Chicago and received his PhD in philosophy in 1958. Gendlin's theories impacted Rogers' own beliefs and played a role in Rogers' view of psychotherapy.[2] From 1958 to 1963 Gendlin was Research Director at the Wisconsin Psychiatric Institute of the University of Wisconsin. Philosophy[edit]

Three Degrees of Wisdom: Epicureanism, Stoicism, and Neoplatonism Written by Bruce J. MacLennan, PhD, Contributing Writer, Classical Wisdom Ancient philosophy was a way of life, a pursuit of wisdom in order to live well. As such, the philosophies of the classical world have much to offer us today. But modern students are confronted with the same dilemma as ancient ones: which should you choose? Epicureanism?