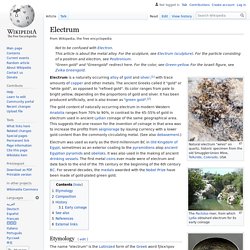 The Pactolus river, from which Lydia obtained electrum for its early coinage. Electrum cup with mythological scenes, a sphinx frieze and the repre­sentation of a king vanquishing his enemies, Cypro-Archaic I, from Idalion, 8th–7th centuries BCE (Louvre, Paris). Electrum is a naturally occurring alloy of gold and silver,[1] with trace amounts of copper and other metals. It has also been produced artificially, and is often known as green gold. The ancient Greeks called it 'gold' or 'white gold', as opposed to 'refined gold'. The gold content of naturally occurring electrum in modern Western Anatolia ranges from 70% to 90%, in contrast to the 45–55% of gold in electrum used in ancient Lydian coinage of the same geographical area. Etymology[edit] Composition[edit] History[edit] Lydian electrum coin (one-third stater), one of the oldest known coins, early 6th century BCE.

Www.britannica. Funeral custom THIS IS A DIRECTORY PAGE. 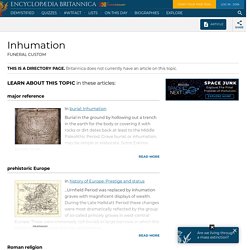 Britannica does not currently have an article on this topic. major reference. Venus. Second planet from the Sun in the Solar System Venus is a terrestrial planet and is sometimes called Earth's "sister planet" because of their similar size, mass, proximity to the Sun, and bulk composition. It is radically different from Earth in other respects. Venus. In Roman mythology, Venus was the goddess of love, sex, beauty, and fertility. 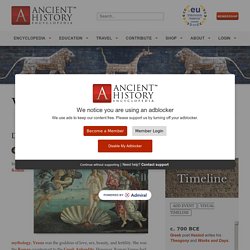 She was the Roman counterpart to the Greek Aphrodite. However, Roman Venus had many abilities beyond the Greek Aphrodite; she was a goddess of victory, fertility, and even prostitution. According to Hesiod's Theogony, Aphrodite was born of the foam from the sea after Saturn (Greek Cronus) castrated his father Uranus (Ouranus) and his blood fell to the sea. This latter explanation appears to be more a popular theory due to the countless artworks depicting Venus rising from the sea in a clam.

Divine Lovers & Children. Venus. On the horns of a dilemma. Hermes__hermeticism. Hermes & Hermeticism. 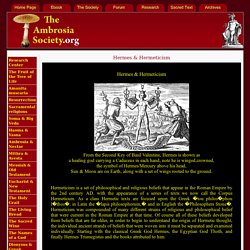 Hermetic. The Arcanum Hermeticum has been chosen for the first volume of the Collectanea Hermetica, because since its first publication in 1623, in the Latin language, no alchymic tract has been more widely read, and no other has been so often reprinted, alike in Latin, German, French and English. 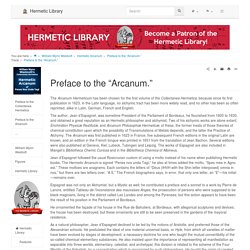 The author, Jean d’Espagnet, was sometime President of the Parliament of Bordeaux, he flourished from 1600 to 1630, and obtained a great reputation as an Hermetic philosopher and alchymist. Two of his alchymic works are alone extant; Enchiridion Physicæ Restitutæ, and Arcanum Philosophiæ Hermeticæ; of these, the former treats of those theories of chemical constitution upon which the possibility of Transmutations of Metals depends, and the latter the Practice of Alchymy. The Arcanum was first published in 1623 in France; five subsequent French editions in the original Latin are known, and an edition in the French tongue was printed in 1651 from the translation of Jean Bachon. Hermetic chemistry - Paracelsus - Google Books.

Hermetic medicine and hermetic philosophy - Paracelsus, Lauron William De Laurence - Google Books. The Hermetic Arcanum: The Secret Work of the Hermetic Philosophy, Wherein ... - Anonymous - Google Books. The Sublimation of Mercury. The sublimation of the mercury made by the Alberto the Great's Work described in "LeComposé des Composés", Arché, Milano, pages 51 to 93 and for the one of Artephius in "Le Livre Secret Du Trés ancien Philosophe Artephius", traitante of l'Arte ocuclte & de la pierre Philosofale: In a mud or stainless steel porringer, mix intimately with a stainless steel spoon 400 g of canonical Mars or Venus effloresced at the sun and reduced to thin powder in a mortar, 200 g of common salt common crackle under heat and reduced to thin powder also and 200 g of native cinnabar sulphide, well grinded and sieved through a 60 lines per centimetre or 120 lines per inch sieve. 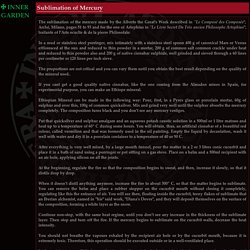 Www.merriam-webster. Rebus. Allusional device that uses pictures to represent words or parts of words A rebus-style "escort card" from around 1865, to be read as "May I see you home my dear? 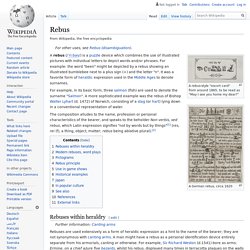 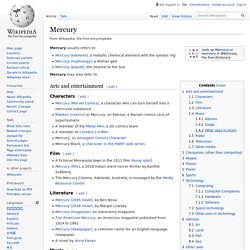 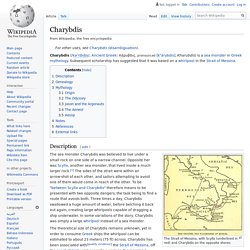 Subsequent scholarship has suggested that it was based on a whirlpool in the Strait of Messina. Description[edit] Scylla. In Greek mythology, Scylla[2] ( SIL-ə; Greek: Σκύλλα, pronounced [skýl̚la], Skylla) was a legendary monster that lived on one side of a narrow channel of water, opposite her counterpart Charybdis. 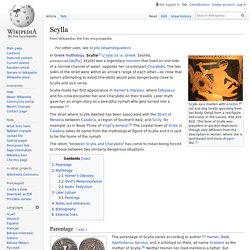 Mercury. Mercury. Coniunctio ~ Sol and Luna ~ the alchemical king and queen. Sol&Luna the art of leather. Fanfiction. The story of the god Sol and the goddess Luna is one that has been lost over the ages. The warrior king Sol, master of earth and fire, falls in love with the goddess Luna, mistress of wind and water. Few know of their tale... and their tragedy. The characters of Golden Sun will be hinted at in this story, but it is basically a legend that will go along with my actual story. Aurora. Natural light display that occurs in the sky, primarily at high latitudes (near the Arctic and Antarctic) Images of auroras from around the world, including those with rarer red and blue lights Aurora australis from the ISS, 2017. Video of this encounter: [2] An aurora (plural: auroras or aurorae),[a] sometimes referred to as polar lights, northern lights (aurora borealis), or southern lights (aurora australis), is a natural light display in the Earth's sky, predominantly seen in the high-latitude regions (around the Arctic and Antarctic).

Helios. Ancient Greek personification of the sun Helios, also Helius (; Ancient Greek: Ἥλιος Hēlios; Latinized as Helius; Ἠέλιος in Homeric Greek), in ancient Greek religion and myth, is the god and personification of the Sun, often depicted in art with a radiant crown and driving a horse-drawn chariot through the sky. He was a guardian of oaths and also the god of sight. Etymology[edit] Sol Invictus. Late Roman solar god Invictus as epithet[edit] Mithraism. Sol. Avertissement de redirection. Www.dictionary. Avertissement de redirection. Www.merriam-webster. What meaning do Sol and Luna have in astrology. The story of Sol and Luna by SiberianDraco on DeviantArt. Luna. From Wikipedia, the free encyclopedia Jump to navigationJump to search Luna commonly refers to: Luna may also refer to: Raymundus lullius - Recherche Google. Ramon Llull. 13th and 14th-century Majorcan writer and philosopher Ramon Llull, T.O.S.F. (Catalan: [rəˈmoɲ ˈʎuʎ]; c. 1232[1] – c. 1315; Anglicised Raymond Lully, Raymond Lull; in Latin Raimundus, or Raymundus Lullus, or Raimundo Lulio, or Lullius) was a mathematician, polymath, philosopher, logician, Franciscan tertiary and writer from the Kingdom of Majorca.

He is credited with writing the first major work of Catalan literature.[2] Recently surfaced manuscripts show his work to have predated by several centuries prominent work on elections theory. He is also considered a pioneer of computation theory, especially given his influence on Leibniz.[3][4][5] Saint or heretic[edit] Since Llull's first writings, there has been confusion in the church regarding whether he was a saint or a heretic.

Within the Franciscan Order Llull is honoured as a martyr. The Abandoned Word; Alchemical Studies series 16. Freemasonry for Men and Women. History of Alchemy. We take a look at another great influencing character on the golden age of alchemy from the 14th or 15th century. Bernard Trevisan (Bernard of Treviso, Bernardus Trevisanus) refers to one or more Italian alchemists. These are often confused, or more accurately the name may refer to a shadowy figure or figures. Bernard Trevisan. Bernard Trevisan (Bernard of Treviso, Bernardus Trevisanus) was a fictional Italian alchemist who lived from 1406-1490[1]. The Quest for the Phoenix: Spiritual Alchemy and Rosicrucianism in the Work ... - Hereward Tilton.