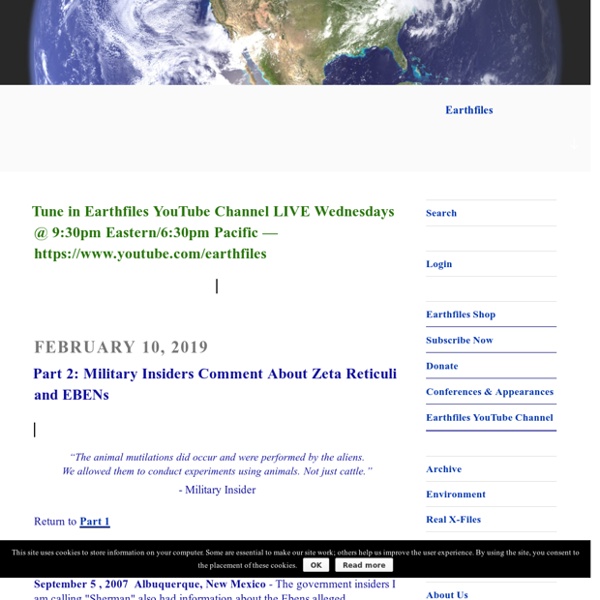 Mel's Hole 15 years ago, a strange man named Mel Waters called in to the Art Bell radio program, claiming he had discovered a mysterious and infinite hole on his property near Ellensburg, Washington. Quickly dubbed Mel's Hole, the strange legend of the never-ending pit and its paranormal characteristics spiraled farther and farther. When skeptics looked more closely, they discovered that no man named Mel Waters ever lived near Ellensburg. To this day the hole's existence and the man's true identity remain unverified.

Alien Abduction – The Blog It was the year that Kenneth Arnold saw nine flying disks (later dubbed “flying saucers” by the press) in formation over Mt. Ranier in Washington State. It was the year The United Nations was founded. the state of Israel was founded, and the Dead Sea Scrolls were discovered. It was the year the CIA was created and . . . It was the year I was born, as I said a very significant year. Came of age in the Sixties. Black Projects: The Hole where 400 Billion of US Tax Dollars Goes Every Year In this interview with Kerry Cassidy of Project Camelot, Michael Schratt shows and tells about the aircraft that the government built without our knowledge, with our money, since at least the 1950s. These recently declassified and still classified or outright denied projects are fascinating testimony to just SOME of the advanced technologies developed and hidden from us—no doubt under the stamp “national security”. Michael shows us a binder of evidence he collected from test pilots of the secret craft, others he’s spoken with, and research he’s done on his own from government sources—with LOTS of photos, diagrams and conceptual drawings. He speaks of the Honda Stealth bombers and other black budget aircraft as well as technologies that make them able to cruise at 90,000 feet (twice that of a commercial airliner) at high speed, slip through radar undetected; one of which uses the rear window of a Corvette as a windscreen.

High Strangeness Kansas - Jeff Templin is a amateur photographer. He says he's seen it all until now. While taking pictures of wildlife back in February, something caught his eye. He said it looked like an unusual contrail. "Right over the city, clear as a bell," said Templin. The UFO Mafia U.S. Government’s Discloses That Space Aliens Exist! Proof At Last! October 26, 2013 on 12:49 am | In Close Encounter Of The First Kind, extraterrestrial, Flying Saucers, History, MOVIES, NEWS, UFO VIDEOS, UFOs | No Comments U.S. Government Tells World That Aliens Exist!

iPad Simulator Please How would you rate us? CrapAwesome If you are having issues on "slide to login", double click the slider button Please show your support for our hosting fee by clicking on some ads. Thanks Q1. Is that free? Russian geneticists to reveal alien’s DNA mystery Russian geneticists to reveal alien’s DNA mystery Scientists may soon unravel the mystery of the “Uralian alien,” a tiny creature found near the town of Kyshtym in the Urals. Scientists carried out five series of laboratory studies investigating the DNA samples of the creature’s biological material. The latest study conducted by a Moscow-based Institute of Forensic Medicine produced sensational results. “A gene discovered in the DNA samples doesn’t correspond with any genes pertaining to humans or anthropoid apes,” said Vadim Chernobrov, a coordinator with the public research center Kosmopoisk. “No gene samples available at the laboratory match the gene.

CANAIDAN UFO News Articles Welcome to PSICAN's Ufological section devoted to experiences and the study of things involved with UFOs and related phenomena. This section will include UFO news, articles, and editorials. Have you seen a UFO or have encountered something that you think might be UFO related? If you wish to report a sighting or experience with a UFO or something you feel is "UFO" related, please click here and a window will open with a form for you to fill out. Your information will be kept strictly confidential (only seen by yourself and PSICAN investigators) and never published without direct consent. You may also email us at admin@psican.orgThis e-mail address is being protected from spambots.

Why Warp Drives Aren't Just Science Fiction Astrophysicist Eric Davis is one of the leaders in the field of faster-than-light (FTL) space travel. But for Davis, humanity's potential to explore the vastness of space at warp speed is not science fiction. Davis' latest study, "Faster-Than-Light Space Warps, Status and Next Steps" won the American Institute of Aeronautics and Astronautics' (AIAA) 2013 Best Paper Award for Nuclear and Future Flight Propulsion. TechNewsDaily recently caught up with Davis to discuss his new paper, which appeared in the March/April volume of the Journal of the British Interplanetary Society and will form the basis of his upcoming address at Icarus Interstellar's 2013 Starship Congress in August.

Newly released files from The National Archives Skip to Main Content Home > UFOs UFOs UFO News Articles and Editorials Government of Canada Provides Open Access to UFO X-Files The Toronto Canada based independent news agency ZlandCommunications, has learned that the Canadian government under the leadership of the Rt. Hon. Prime Minister Stephen Harper has provided open access to approximately 9,500 UFO files. These files can be found at: Canada's UFOs: The Search for the Unknown. eclectic excerpts delivered to your email every day from editor Richard Vague Today's encore selection -- from Quantum: Einstein, Bohr, and the Great Debate about the Nature of Reality by Manjit Kumar. Albert Einstein (1879-1955), the physicist who developed the theory of relativity, was born and spent his earliest years in Germany: " 'The people of Ulm are mathematicians' was the unusual medieval motto of the city on the banks of the Danube in the south-western corner of Germany where Albert Einstein was born. It was an apt birthplace on 14 March 1879 for the man who would become the epitome of scientific genius.