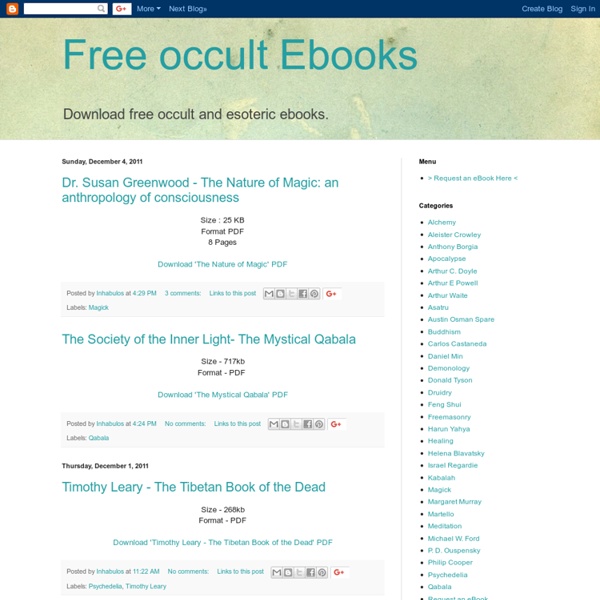 Online Scans of Rare & Antique Metaphysical Books pages 1-13 'The Path' and pages 14-19 'Meaning of the Symbol' Voice of Isis - by the Order of Christian Mystics - 1926 Voice of ISIS: CHAPTER XXXIV. The Meaning of the Symbol The Seal consists of a double triangle inscribed in a circle, with an open Eye in the center and three five pointed stars in the spaces between the sides of the triangle and the circle. The circle represents Boundless Space and limitless Time in Eternity. In one sense it is the circle of the Zodiac (the pathway of our solar system) from the twelve Gates or Houses of which issues the radiant light of The Christos represented as focused in the center of the Open Eye. Thus the All-seeing Eye (the Absolute) sheds its seven-fold creative rays within its creations.

The Divine Life Society--Free Books on Yoga, Religion and Philosophy Some of the HTML files have both Devanagari (Windows, Mac and Unix X11R6) and Romanized Sanskrit fonts (Windows only). Instructions to install the fonts can be found at Avinash Chopde's ITRANS site. Press the "Shift" key and click on a link below to download the fonts for your system: If you do not install these fonts, you will see some other characters in place of the Sanskrit fonts but the English texts are not affected. You do not need to install the fonts if you are viewing the PDF files. If you would like to be informed of titles as they become available, you can join "The Divine Life Society" e-mailing list by typing your e-mail address in the following form and clicking on the button. Thank you. *--document has sanskrit fonts. All About Hinduism "All About Hinduism" is intended to meet the needs of those who want to be introduced to the various facets of the crystal that is Hinduism. Books by Sri N.

Free Occult eBooks, Esoteric PDF, Sacred Texts Downloads A dialogue window will then appear, asking you where you want to save the file. You should save the files to your desktop or another folder you can easily find such as 'Downloads'. Once you have downloaded the file, go to your desktop (or wherever you saved it) and double click the e-book icon to open it. Summary: The 100: A Ranking of the Most Influential Persons in History is a 1978 book by Michael H. Summary: All creation is governed by law. By Gustavus Hindman Miller (2.3 MB.doc) Summary: Dream Dictionary (An A to Z of the Meanings of Dreams) : is a collection of a wide variety of subjects which an individual might dream about and what meaning that dream might hold for the individual. Summary: A study of some of the themes found in the folklore of the West of England. Summary: Survey Of Literature From Ancient India, Mostly Hindu Holy Texts But Also Some Poetry And Fairy Tales. Summary: A guided beginning to affirming the true wishes and desires of your life. (1347kb.pdf) By G.R.S.

Esoteric Online V-Library - Veritas The V-Library (Veritas Library) is an online collection of e-books by various authorities in the field of metaphysics and the occult. All the e-books are free for use and are public domain resources. "The idea for this came to me when seeing the Bob Hendricks Memorial CM Library on OccultForums and after seeing the Sacred Magick website fall victim to bandwidth strangulation. I figured veritas could use a Library for each of its varied subjects. Many thanks go out to Adept for compiling the initial list of e-books and any other members not mentioned who helped to edit and organize the copious amounts of e-books. Note: The e-books are alphabetized according to the last name of the author. Authors Abano, Peter de The Heptameron Acharya, Pt. Agrippa,Cornelius Aesop Akshay, Regulagedda Ambelain, Robert Ankerberg, Dr. Aristotle AsheJournal.com Bacon, Roger Bailey, Alice Bardon, Franz Blavatsky, Mme. Barrett, Francis Caldwell, Sarah Case, Paul Foster Confucius Conybeare, F.C. Cottle, A.S. Cremonensis, Gerard

Free Occult, Esoteric, Magick & Metaphysical Ebooks Here is a collection of occult, esoteric, magick and metaphysical ebooks that have been gathered from all over the Internet and are believed to be public domain. Many of these are rare and out of print classics, including the major magical grimoires, texts on astrology, tarot, alchemy, psychic phenomena, Hermeticism, Kabbalah, the Golden Dawn, Thelema, Theosophy, Chaos Magic, and much more. This ebook collection is constantly being updated with new titles every few weeks, so drop by often for our latest additions. If you want to share these ebooks with others on your own blog, forum or website, please feel free to link to this page. This way, you can help us spread the word about this great free resource. Most of the ebooks listed in this catalog are in PDF format requiring the use of Acrobat Reader. All of these ebooks are also compressed in ZIP format for faster downloading. For PC computers, right click on the link to the file (if you left click, the file will open in the browser).

Grimoar - Occult Texts Welcome to our library Welcome in our occult texts library. It contains 2052 unrevised texts in pdf, doc and other formats. Librarians are responsible neither for text redaction nor for their contents. If you would like to contribute to the library, use form below. If you would like to become administrator of this library, contact us on address mentioned above. Or you can switch to czech language version. Contribute to our library occult ebooks archive