Why Do People Persist in Believing Things That Just Aren't True? 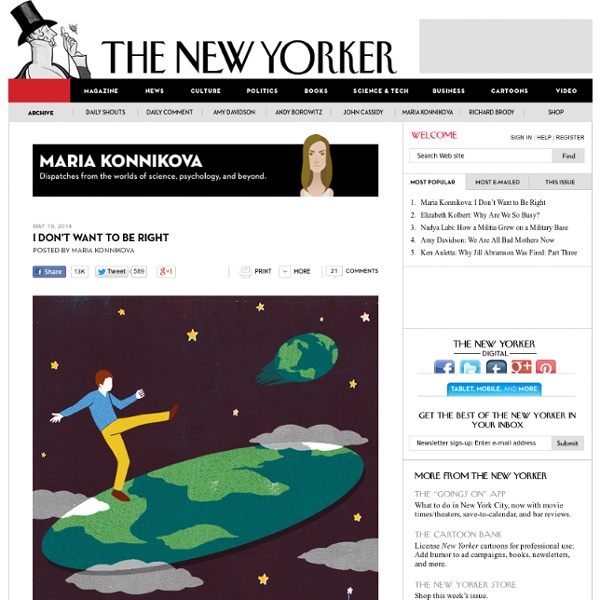 Last month, Brendan Nyhan, a professor of political science at Dartmouth, published the results of a study that he and a team of pediatricians and political scientists had been working on for three years. They had followed a group of almost two thousand parents, all of whom had at least one child under the age of seventeen, to test a simple relationship: Could various pro-vaccination campaigns change parental attitudes toward vaccines? Each household received one of four messages: a leaflet from the Centers for Disease Control and Prevention stating that there had been no evidence linking the measles, mumps, and rubella (M.M.R.) vaccine and autism; a leaflet from the Vaccine Information Statement on the dangers of the diseases that the M.M.R. vaccine prevents; photographs of children who had suffered from the diseases; and a dramatic story from a Centers for Disease Control and Prevention about an infant who almost died of measles. The result was dramatic: a whole lot of nothing. Related:  Chapter Four The Future is a foreign country • Psychology

Mintzberg's 5Ps of Strategy - Strategy Skills Training From MindTools.com Developing a Better Strategy Learn about these five strategy definitions. © iStockphoto/kWaiGon What's your approach to developing strategy? Many of us brainstorm opportunities, and then plan how we'll take advantage of them. Unfortunately, while this type of approach is important, we need to think about much more than this if we want to be successful. After all, there's no point in developing a strategy that ignores competitors' reactions, or doesn't consider the culture and capabilities of your organization. Management expert, Henry Mintzberg, argued that it's really hard to get strategy right. About the 5 Ps Mintzberg first wrote about the 5 Ps of Strategy in 1987. Plan.Ploy.Pattern.Position.Perspective. By understanding each P, you can develop a robust business strategy that takes full advantage of your organization's strengths and capabilities. In this article, we'll explore the 5 Ps in more detail, and we'll look at tools that you can use in each area. 1. 2. 3. 4. Note: 5. Using the 5 Ps

Mother's Day: The Good Child If your mother was mentally ill, undoubtedly Mother's Day, for you, was not the holiday it was supposed to be. In fact, the very existence of mothers who are emotionally and psychologically unfit to mother, as well as the experience of having a mentally ill mother, is still taboo and most commonly, a conversation left unspoken. When a mentally ill mother "passes" as normal, often there is no one who reflects back to the child that there is something seriously amiss in the behaviors and expressions of the mother, and yeowwwww, that lack of acknowledgment and support hurts. The kind of hurt that is lifelong and personality bending. Dark secrets are held in the hearts of these children, self-esteem is nowhere to be found, emulated or developed, and shame is deeply felt. For every Mother's Day tribute urging a shout out and outpouring of gratitude for Mom, there is a bellowing rebuke to those for whom celebrating Mom would not only be crazy, but wrong.

How Our Delusions Keep Us Sane: The Psychology of Our Essential Self-Enhancement Bias by Maria Popova How evolution made the average person believe she is better in every imaginable way than the average person. “Optimism is the faith that leads to achievement; nothing can be done without hope,” Helen Keller wrote in her 1903 treatise on optimism. But a positive outlook, it turns out, isn’t merely an intellectual disposition we don — it’s a deep-seated component of our evolutionary wiring and the product of powerful, necessary delusions our mind is working around-the-clock to maintain. At the root of that mental machinery lies what psychologists have termed the self-enhancement bias — our systematic tendency to forgo rational evaluation of our own merits and abilities in favor of unrealistic attitudes that keep our ego properly inflated as to avoid sinking into the depths of despair. The mind’s delusory tendencies, McRaney explains, are just as vital as the automatic self-preservation processes of the body. Illustration from 'The Mightly Lalouche' by Sophie Blackall.

Sick of this market-driven world? You should be | George Monbiot | Commentisfree To be at peace with a troubled world: this is not a reasonable aim. It can be achieved only through a disavowal of what surrounds you. To be at peace with yourself within a troubled world: that, by contrast, is an honourable aspiration. This column is for those who feel at odds with life. It calls on you not to be ashamed. I was prompted to write it by a remarkable book, just published in English, by a Belgian professor of psychoanalysis, Paul Verhaeghe. We are social animals, Verhaeghe argues, and our identities are shaped by the norms and values we absorb from other people. Today the dominant narrative is that of market fundamentalism, widely known in Europe as neoliberalism. Verhaeghe points out that neoliberalism draws on the ancient Greek idea that our ethics are innate (and governed by a state of nature it calls the market) and on the Christian idea that humankind is inherently selfish and acquisitive. At the heart of this story is the notion of merit.

10 Global Values That Are Old and Stale, and How to Replace Them | Scilla Elworthy Two hundred and thirty remarkable people from North and South gathered in Reykjavik from April 9-12 to share actions for effective change on the issue of "the power of love and compassion in governance." Why Iceland? Consistently rated the most peaceable of all countries in the world by the Global Peace Index, Iceland has reduced its military expenditure to zero, has no armed forces, and has reduced the inequality gap between rich and poor. That's a good start. One of the people bringing remarkable experience was Dishani Jayaweera, who travelled from Sri Lanka and experienced her first ever snowstorm. She described the violence and injustice that led her and her partner to set up the Center for Peace-building and Reconciliation in 2003, to work with young people and religious leaders to accept, respect and nourish diversity in Sri Lanka. As founder of Peace Direct I was asked how the power of love and compassion can be increased in the world. So are values becoming more important to us?

Neurodiversity Rewires Conventional Thinking About Brains | Magazine Illustration: Mark Weaver In the late 1990s, a sociologist named Judy Singer—who is on the autism spectrum herself—invented a new word to describe conditions like autism, dyslexia, and ADHD: neurodiversity. In a radical stroke, she hoped to shift the focus of discourse about atypical ways of thinking and learning away from the usual litany of deficits, disorders, and impairments. Echoing positive terms like biodiversity and cultural diversity, her neologism called attention to the fact that many atypical forms of brain wiring also convey unusual skills and aptitudes. Autistic people, for instance, have prodigious memories for facts, are often highly intelligent in ways that don’t register on verbal IQ tests, and are capable of focusing for long periods on tasks that take advantage of their natural gift for detecting flaws in visual patterns. The new word first appeared in print in a 1998 Atlantic article about Wired magazine’s website, HotWired, by journalist Harvey Blume.

This Harvard Study Can Predict When You’ll Make Bad Decisions (And When You’ll Make Good Ones) 178 Flares Twitter 100 Facebook 78 178 Flares × A few years ago, I was on the hunt for some new financial investments, and doing a lot of research. After giving it some thought, I decided to buy some individual stocks. Which specific stocks doesn’t really matter because buying them now would not be a wise bet, but for transparency’s sake, they were: Cato Corp (CATO)El Paso Pipeline (EPB)Greif Inc. In situations like this, I always make a plan: buy at [x], and sell at [y] for a profit if I got it right or [z] for a loss if I got it wrong. Side note: This is a good decision-making formula for any investment in any part of your life. Then, I got lazy. What I should have done at this point is remembered my plan: sell at [y]! Instead of falling back on all the hard work I did to place a smart value on my investment, I thought, “Hey, I’m even smarter than I thought. Several days later, the market took a turn for the worse. More Stress = Less Money But here’s the twist.

seventhvoice I’ve just read yet another post stating that women with Autism have it easier than men with Autism because they are better at ‘masking’ their behaviors. This is a gross over statement. Not all women with Autism are brilliant at ‘mimicking’ others. Not all women with Autism engage in ‘masking’ behaviors. The continued, unquestioning, promotion and legitimization of the notion that all women with Autism willingly comply with such stereotypical codes of behavior does us no favors at all. If anything, one could argue that such ideas do little more than create another rod for our backs as they are fast being employed as yet another diagnostic benchmark to determine whether or not a woman has Autism. The problem with these ideas is that they avoid or sidestep the simple truth that women were not allowed to express feelings of difference in any positive, meaningful way, prior to the understanding that women could experience High Functioning Autism (Asperger’s Syndrome) right along side men.