Jumpstart Your Journaling: A 31-Day Challenge 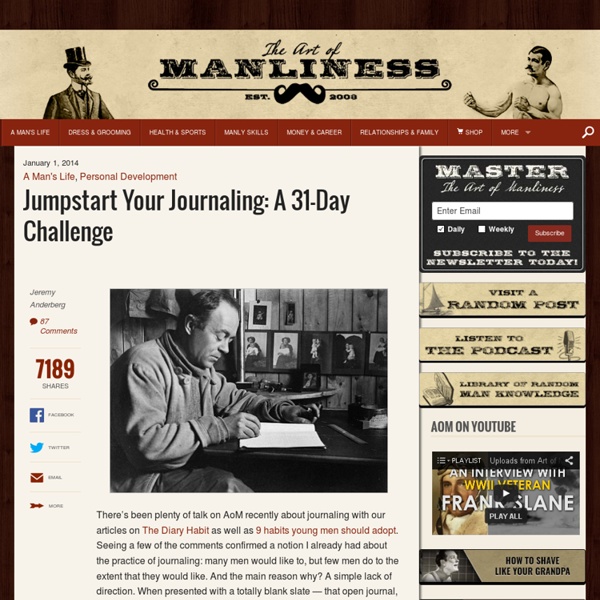 The Diary Habit by Arnold Bennett | Manvotional Editor’s note: We’ve talked before about how and why to become a regular journaler/diary writer. (I like to call it a journal myself, but “diary” didn’t used to have the feminine connotations its acquired in the present day.) Writing in my journal every night is something I strive to do, although I am not always successful. So I enjoyed coming across some witty and truthful thoughts on the diary habit from one my favorite vintage writers: Arnold Bennett. The following excerpt comes from Bennett’s Self and Self-Management: Essays on Existing, which was published in 1918. Maybe it will inspire you to think about establishing the diary habit in your own life. Let us consider, first, a strange quality of the written word. The spoken word is bad enough. Take—O exceptional individual! You may say: “Ah! To which I would reply: “Write it and lock it up in your safe.” To which you may rejoin: “Ah! To which I would retort: “If you are dead you needn’t mind discovery.” To which you might respond:

How To Use Evernote for Writing Fiction 20 obsolete English words that should make a comeback Photo: Katherine Hodgson If we all start using them, these words can be resurrected. DURING MY UNDERGRADUATE studies as a Linguistics major, one of the things that struck me most is the amazing fluidity of language. New words are created; older words go out of style. Words can change meaning over time, vowel sounds shift, consonants are lost or added and one word becomes another. Living languages refuse to be static. The following words have sadly disappeared from modern English, but it’s easy to see how they could be incorporated into everyday conversation. Words are from Erin McKean’s two-volume series: Weird and Wonderful Words and Totally Weird and Wonderful Words. 1. Verb trans. – “To confuse, jumble” – First of all this word is just fun to say in its various forms. 2. 3. Verb trans. – “To scrape together; to gather together from various sources” – I’m sure this wasn’t the original meaning of the word, but when I read the definition I immediately thought of copy-pasting. 4. 5. 6. 7.

» The 7-Step Write a Book Fast Program Post written by Leo Babauta. I’m often asked about writing (something I’ve done professionally for 22 years), and one of the most common things people want help with is writing a book. I’ve written a number of books, including 110,000 words of a novel in a month (in addition to blogging regularly), and numerous non-fiction books. I could share a lot of tips for writing a book, but my favorite secret is how I can write a book in just three days. I’ve written several books this way, and really, it’s the same process I used to write 110,000 words in a month. If you want to take several years to write a book, that’s fine, but you’ll want to skip this post. And trust me, it works. Create a Time Limit. That’s it. Happy writing, my friends.

25 Things You Should Know About Word Choice 1. A Series Of Word Choices Here’s why this matters: because both writing and storytelling comprise, at the most basic level, a series of word choices. 2. Words are like LEGO bricks: the more we add, the more we define the reality of our playset. 3. You know that game — “Oh, you’re cold, colder, colder — oh! 4. Think of it like a different game, perhaps: you’re trying to say as much as possible with as few words as you can muster. 5. Finding the perfect word is as likely as finding a downy-soft unicorn with a pearlescent horn riding a skateboard made from the bones of your many enemies. 6. For every right word, you have an infinity of wrong ones. 7. You might use a word that either oversteps or fails to meet the idea you hope to present. 8. Remember how I said earlier that words are like LEGO, blah blah blah help define reality yadda yadda poop noise? 9. Incorrect word choice means you’re using the wrong damn word. 10. 11. 12. 13. 14. Am. 15. No, really. 16. 17. 18. 19. 20. 21. 22. 23.

Do-It-Yourself Book Press By Hamish MacDonald UPDATE:Hamish has started a DIY Book podcast! Back in 2000, I wrote an article for this website about how to produce your own book. Things have changed considerably since then, both in the technology available to individuals and in the services available in the marketplace. It’s all good news for us independent publishers. The original article was called “DIY Book Production.” Generally, self-publishing involves an inverse relationship of work to money: The more work you’re willing to do, the more money you can save; the more you want to just skip to an end product, the more it’ll cost you. Self-pub: Four times more options than in 2000. There may have been other ways to do it, but having written a book about Y2K, I didn’t have the time to find out. Offset printingPrint-on-DemandHand-bound hardcoversPerfect binding Here’s a summary of each (with special emphasis on the ones I like!) Offset printing. Cynthia pipes in: I second that recommendation wholeheartedly. Badness!

Media tycoons wanted: Make your own newspaper Newspaper Club has been voted one of the designs of the year So you want to be a newspaper baron? (Haven't you heard that print is dead?) If you insist - well, you could do work experience (for nothing) and hopefully get a part-time job at the paper. Then, with all your power and influence, you can shape the news agenda and be courted by some of the world's most powerful politicians - if newspapers still exist then. Or you could just go online, now, and print your own paper using the Newspaper Club. 'Surprisingly cheap' This new London-based start-up allows anyone to print their own 12-page newspaper. "It doesn't occur to people that they can print their own newspaper, and you find out you can, it's kinda cool," says Russell Davies, a former ad executive-turned-blogger who is one of those behind the venture. "We thought a lot of people would think the same." "We've been web people all our lives, and then we accidentally found out through a friend how cheap it was to print," he says. Fanzines