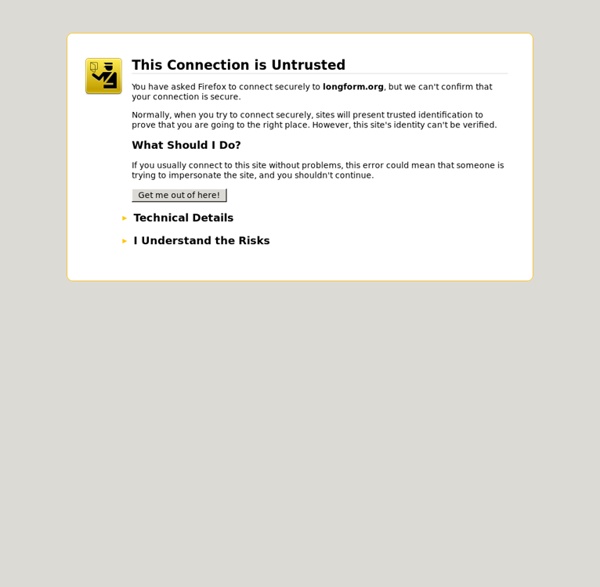 David Foster Wallace on Writing, Self-Improvement, and How We Become Who We Are by Maria Popova “Good writing isn’t a science. It’s an art, and the horizon is infinite. Science Two possible explanations of mysterious earthquake lights — Centuries of humans have reported strange lights moving along the ground before an earthquake strikes. Now, two different teams of scientists have two competing theories that could explain where those lights come from and how they're made. — Maggie • 5 Maggie Koerth-Baker at 6:57 am Fri, Apr 11, 2014 • 16 Oarfish are freaky sea dragons.

What does Creative Commons means? (Infographic) - Iceweasel [german version] Many People know that there is something called "creative commons licenses". But what does it mean? Is it a license? Learning and Memory From song lyrics to former addresses, our brains hold a seemingly endless supply of information. How are we able to learn, store, and recall information with such ease? Brain cells undergo chemical and structural changes during learning. By changing the number, or strength, of connections between brain cells, information is written into memory. Ongoing studies are helping scientists identify how different areas of the brain work together to enhance memory formation and storage. The Psychology of Writing and the Cognitive Science of the Perfect Daily Routine Reflecting on the ritualization of creativity, Bukowski famously scoffed that “air and light and time and space have nothing to do with.” Samuel Johnson similarly contended that “a man may write at any time, if he will set himself doggedly to it.” And yet some of history’s most successful and prolific writers were women and men of religious daily routines and odd creative rituals. (Even Buk himself ended up sticking to a peculiar daily routine.) Such strategies, it turns out, may be psychologically sound and cognitively fruitful.

SFI takes first steps toward a science of slums Feb. 6, 2013 8 p.m. Slums in the world’s fast-growing cities are often seen as problems and, in most cases, outside the law. But, from Paris and Tokyo 150 years ago to Mumbai and Johannesburg today, slums consistently emerge as a byproduct of the socioeconomic pressures of rapid urbanization, and they often don’t get the credit they deserve as entry points to the city for poor migrants, or for the economic activity they generate. Nautil.us The astounding quantities of discarded plastic that end up in oceans each year tend to concentrate in ring-like swirls of currents called gyres, yet most of it can be hard to spot—not because it’s not there in great quantities, but because it often takes the form of fingernail-sized microplastics. “It looks like pristine ocean until you tow your net through the water,” researcher Erik Zettler at Sea Education Association (SEA) said about the North Atlantic Gyre. “That’s when you find the plastic.” The presence of so much plastic debris at sea poses dire threats to the marine life unlucky enough to ingest small bits of it or to become entangled in nets or plastic bags. But recent research has also revealed some of the surprising ways a few resourceful marine creatures use it to their own advantage.