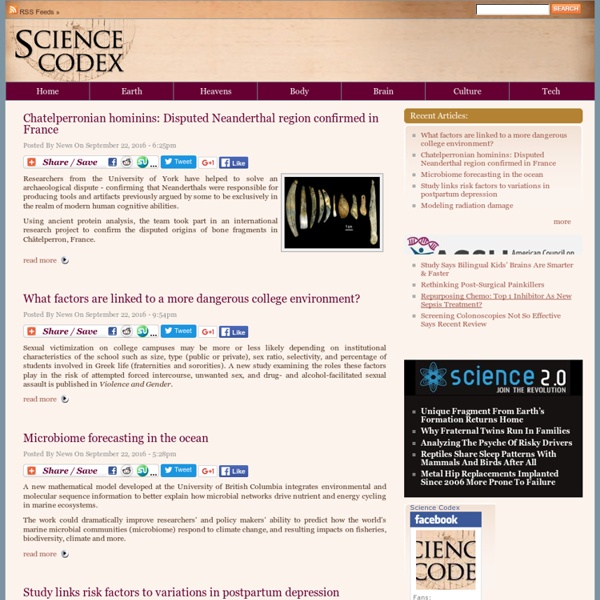 13 World Mysteries Without Explanation Chinese mosaic lines These strange lines are found at coordinates: 40°27’28.56″N, 93°23’34.42″E. There isn’t much information available on these strange, yet beautiful mosaic lines carved in the desert of the Gansu Sheng province in China. Some records indicate they were created in 2004, but nothing seems official. Of note, these lines are somewhat near the Mogao Caves, which is a World Heritage Site. The lines span a very huge distance and yet still retain their linear proportions despite the curvature of the rough terrain.

Publications - Journals by Subject Ocean Science (OS) is an international open access journal dedicated to the publication and discussion of research on all aspects of ocean science, experimental, theoretical and laboratory. OS covers the fields ocean physics, ocean chemistry, biological oceanography, air-sea interactions, ocean models (physical, chemical, biological and biochemical), coastal and shelf edge processes, and paleoceanography. Aims & Scope | Editorial Board | Online Library OS | Online Library OSD Your Journey Begins - DNA Ancestry Project Participation is simple. Begin by ordering a public Participation Kit. Your kit will arrive in the mail and contains four swabs. Simply use the swabs to rub inside of your cheek for 30 seconds, and mail them back to the laboratory using the pre-addressed return envelope provided in the kit.

Pressurised System Installations, Athboy, Co Meath, Ireland, Renewable Heating and Energy, Solar Panels, Condensing Boilers, Wood Pellet Boilers, Thermal Energy, Heat Pumps, Heat Recovery Ventilation, Condensing Gas Boilers, Stoves, Underfloor Heating, Pr Pressurised hot water systems are often called unvented systems. In an unvented system, incoming pressurised cold water typically enters a hot water tank suitable for pressurised water up to 10 -13 bar where it is heated either directly by means of electrical immersion (direct); or by means of heat exchanger coils within the vessel (indirect). Traditionally, houses would use a single coil fed from the gas/oil boiler. However, if one chooses to integrate solar collectors a second coil is required. Cold water from the mains is delivered to the base of the cylinder, the water is heated.

Mediterranean and Near Eastern Fieldwork at Penn The Mt. Lykaion Excavation and Survey Project is an international, multidisciplinary, scientific investigation at the sanctuary of Zeus on Mt. Lykaion, Arcadia. According to ancient authors, this sanctuary was famous in antiquity as the site of Pan-Arcadian and Pan-Hellenic athletic contests in honor of Zeus, and for an impressive open-air altar where human sacrifice reportedly took place.

Voices - Therese J. Borchard - Beyond Blue “Bewitched, bothered, and bewildered am I” wrote US songwriter Lorenz Hart about the feeling of infatuation. It’s blissful and euphoric, as we all know. But it’s also addicting, messy and blinding. Without careful monitoring, its wild wind can rage through your life leaving you much like the lyrics of a country song: without a wife, job and truck. Journals PLOS publishes seven peer-reviewed open-access journals. The journals vary in their selectivity and contain differing amounts of commentary articles from opinion leaders in a variety of scientific disciplines.The journals are editorially independent. They include PLOS ONE, which publishes all rigorous science across the full range of life and health sciences; the community journals (PLOS Genetics, PLOS Computational Biology, PLOS Pathogens, and PLOS Neglected Tropical Diseases); and our flagship journals, PLOS Medicine and PLOS Biology, highly selective journals publishing fewer than 10% of submissions along with a range of informative and influential non-research content. You can search the journals for specific articles here and you can sign up for e-mail Content Alerts for all our journals here. We encourage authors to consider carefully each journal’s scope before submission in order to minimize delays in the review process. PLOS Biology

The Fiscally Fit Man What You Can Learn from Sports MascotsBy J. Rentilly April 15, 2014 If there's one essential fashion tip to be gleaned from the flamboyant world of professional sports mascots—you know, the slapstick San Diego Chicken or the green and goofy Phillie Phanatic—it is this:... Survive the Shark Tank! NOVA Can Wind Turbines Make You Sick? Residents living in the shadows of wind turbines say the sound is making them sick. But so far the science isn't there. From NOVA Next | Jun 27, 2018 Thirty Years Ago Today, Global Warming First Made Headline News On June 23, a NASA climate scientist, James Hansen, told a U.S. No Conflict: Transparency and Morals Consider this scenario: You have been sick for some time, more debilitated by the month, and doctors are scratching their heads. Finally, in pain and exhausted, you find a specialist who figures it out. Your ailment is very serious, but the good news is that it can be treated with a new drug. The doctor writes a prescription, but as he hands it to you, he says: “Just so you know, the company that makes this drug also funds a research project of mine.” This is a classic conflict-of-interest, and most people would applaud this physician for voluntarily disclosing his personal interest here. Indeed, many ethicists and policy makers argue for mandatory disclosure of conflicts—in medicine, but also in law, finance, politics, journalism and on and on.

Synthetic Biology "Synthetic biology" is an umbrella term that refers to a new set of powerful techniques for manipulating the fundamental molecular structures of life, including genes, genomes, cells and proteins. Techniques being developed under the "synthetic biology" rubric include the modification of existing bacteria to produce useful substances or perform new functions, the creation of novel artificial organisms from "scratch," and — less noted to date — the modification of animal and human genes. Synthetic biologists foresee a host of human applications, including new methods to produce drugs, biofuels and vaccines; to diagnose, prevent and cure disease; and — far more controversially — to screen, select, and modify genes for specified traits in embryos, children, and adults. Nonetheless, the field remains in its early days, and separating hype from real potential remains difficult.