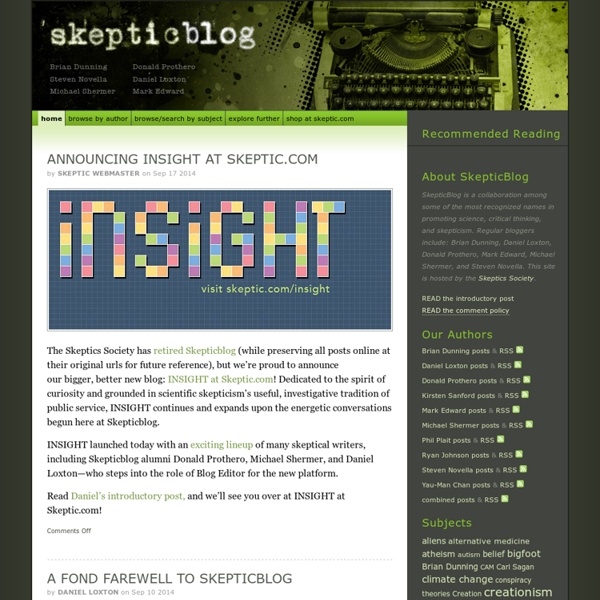 The Rogues Gallery Sam, an SGU listener, brought this to our attention the other day (thank you, Sam.) A new podcast has hit the iTunes shelves. It is called Scripture on Creation. And of course, it is correctly categorized under the ‘Religion and Spirituality’ category, isn’t it? Nope. It is in iTunes ‘Science and Medicine’ category. Strange. “The Bible is not intended by God to be a science textbook, but everything it does say about the material world is accurate. Browsing around their website for a few minutes, it does not take long to realize these are unapologetic creationists, featuring interviews with “doctors” from ‘Answers in Genesis’ and ‘The Discovery Institute’ , and promoting movies such as “Expelled: No Intelligence Allowed”, which they “highly recommend” to their audience. I gave up long ago trying to figure out how Apple manages iTunes from both operational and customer relations standpoints.

Biology of Religion 03. March 2012, 11:06 The online-magazine Evolution: This View of Life did get a new (and, if I might say, awesome) look. For example, the recommendation of John Jacob Lyons, who is a regular commentator here, about presenting the number of comments to each post has been fulfilled. More than ever, the brilliant team with active members such as Robert "@RobertMKadar" Kadar and Hadassah "@Haddie" Head is experimenting with new media possibilities such as videos. After seeing this well-done tutorial, I decided to add a web-interview and sent him some questions. 1. My professional life is devoted to expanding evolutionary science beyond the biological sciences to include all aspects of humanity--in my own research, in higher education (EvoS), and in the formulation of public policy (The Evolution Institute). 2. 3. After decades of studying group selection and human evolution, it only made sense to study religion from an evolutionary perspective. 4. I couldn't agree more.

The Skeptic's Dictionary - Skepdic.com eSkeptic » Wednesday, July 25th, 2012 A Magician in the ClassroomUsing Magic and Mentalism to Teach Skepticism by Paul Goodin Anyone who teaches can relate to running into the occasional brick wall when trying to convey new ideas. To teach critical thinking and impart a skeptical outlook is difficult in and of itself. But when you are teaching where a majority of the students have strong religious convictions, it can be an even greater challenge. Although I teach an advanced writing course, I believe critical thinking is as important to writing as grammatically sound work. I discovered my amateur magician’s skills were a valuable tool to use to introduce a topic that might otherwise be unpalatable to a group where a majority of them hold strong, unmoving religious convictions. Although student reactions vary from class to class, they are usually consistent on the whole. When explaining my methods, I walk a fine line between debunking their beliefs and revealing magician’s secrets. Explore the 101 Resource Center Order the book

Home A Theory of Mind Quackwatch Empirical Zeal Rationally Speaking Genealogy of Religion Science-Based Medicine NeuroLogica Blog Jul 14 2015 Why Pluto is Important As I write this post we are just minutes away from the closest approach of the New Horizons probe to Pluto, the farthest world we have thus far explored (24 minutes and counting). It’s an exciting moment, not just for astronomy buffs or science enthusiasts, but for humanity. I’m glad to see an appropriate level of excitement among the media and the general public. Still, a couple of people have commented to me or in my presence that they don’t understand what the big deal is or why this is important, so allow me a moment to explore why I think this is such a big deal. First, let us not forget what it took to get there. Continue Reading » Jul 13 2015 Supporting the Narrative in an Echochamber Dunning, commenting on the implications of the Dunning-Kruger effect, wrote: This seems accurate, but I think the situation is actually worse. This more active process has been called the “echochamber effect.” Continue Reading » Jul 09 2015 New Zealand Ban on “Trolling”