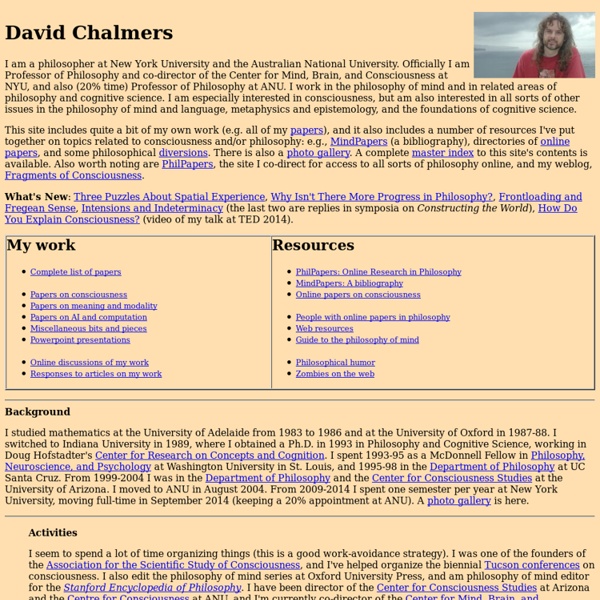 David Chalmers I am a philosopher at New York University and the Australian National University. Officially I am Professor of Philosophy and co-director of the Center for Mind, Brain, and Consciousness at NYU, and also (20% time) Professor of Philosophy at ANU. I work in the philosophy of mind and in related areas of philosophy and cognitive science. This site includes quite a bit of my own work (e.g. all of my papers), and it also includes a number of resources I've put together on topics related to consciousness and/or philosophy: e.g., MindPapers (a bibliography), directories of online papers, and some philosophical diversions. What's New: Three Puzzles About Spatial Experience, Why Isn't There More Progress in Philosophy? Background I studied mathematics at the University of Adelaide from 1983 to 1986 and at the University of Oxford in 1987-88. Activities I seem to spend a lot of time organizing things (this is a good work-avoidance strategy). Research

Consciousness 1. History of the issue Questions about the nature of conscious awareness have likely been asked for as long as there have been humans. Nonetheless, some have argued that consciousness as we know it today is a relatively recent historical development that arose sometime after the Homeric era (Jaynes 1974). Although the words “conscious” and “conscience” are used quite differently today, it is likely that the Reformation emphasis on the latter as an inner source of truth played some role in the inward turn so characteristic of the modern reflective view of self. By the beginning of the early modern era in the seventeenth century, consciousness had come full center in thinking about the mind. By the word ‘thought’ (‘pensée’) I understand all that of which we are conscious as operating in us. Later, toward the end of the 17th century, John Locke offered a similar if slightly more qualified claim in An Essay on Human Understanding (1688), Locke's contemporary G.W. 2. Sentience. Wakefulness.

Interview with Chalmers interviewed by Andrew Chrucky [An abbreviated version of this interview was published in Philosophy Now, Issue 21, 1998.] David Chalmers is currently Professor of Philosophy at the University of California at Santa Cruz, and as of January 1999, he will be Professor of Philosophy and Associate Director of the Center for Consciousness Studies at the University of Arizona. He is the author of the well-known book, The Conscious Mind (1996), and is the subject of a collection of critical essays on this book: Explaining Consciousness: The Hard Problem (edited by Jonathan Shear, 1997). He also manages a web site which includes the most exhaustive bibliography on philosophy of mind ever assembled, a directory of various online papers pertaining to consciousness, his own papers, and his responses to his critics. Andrew Chrucky is an independent scholar with a Ph.D. in philosophy.