Draw As A Maniac 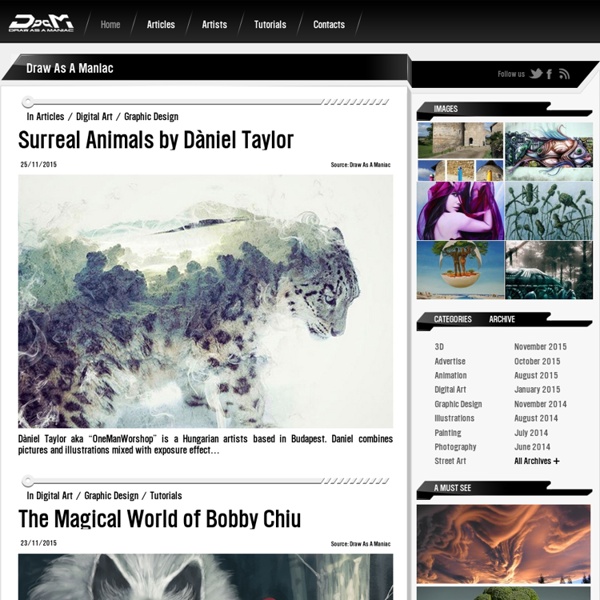 Arthur Mask is an amazingly gifted 2d artist and illustrator based in Sao Paulo, Brazil. If you like video game inspired fan artworks, make sure to scroll through his great illustrations below… N.C. Winters is an artist based in the sunny San Diego, constantly drawing, painting, making webcomics, working digitally and even at times sculpting. He paints in watercolor and,or acrylic, usually on paper or wood and often resin the final piece for extra depth and shine. Maria Ilieva was born in 1973 in Sofia, Bulgaria.

Victor Enrich Creates Playful And Surreal Architecture Fictions A few weeks back we posted about Filip Dujardin’s digitally manipulated buildings, which gave buildings found in and around Ghent, Belgium an Escherian spin. And since then we’ve come across another photographer, Victor Enrich, who likes to bend reality by turning architecture into surreal playgrounds by forming buildings that, while fiction, are sometimes reminiscent of Frank Gehry‘s iconic, if controversial, designs. Where Filip Dujardin’s manipulations were subtle and implausible in their re-imaginings, the images below are far more outlandish. Buildings are bent over like a concertina or plonked down on the beach, stairways lead off into the sky, high-rise apartments have grown bull horns, and houses are completely tipped over with roofs sitting at ground level.

Rashad Alakbarov Paints with Shadows and Light Artist Rashad Alakbarov from Azerbaijan uses suspended translucent objects and other found materials to create light and shadow paintings on walls. The best part is that you can easily create something similar at home – all you need is one or two lamps and some items from your desk. The stunning light painting below, made with an array of colored airplanes has found its way to exhibitions like the Fly to Baku at De Pury Gallery in London. Rashad adds, “Above the cloud with its shadow is the star with its light.

Sweet Station Zemer Peled Peled was born and raised in a Kibbutz in the northern part of Israel. After completing a BA (Hons) at the Bezalel Academy of Art and Design in Jerusalem she graduated with an MA (Hons) from the Royal College of Art. In recent years her work has been featured nationally and internationally in museums and galleries including Sotheby’s and Saatchi Gallery-London, Eretz Israel Museum-Tel Aviv and the Orangerie du Senate, Paris among others. Zemer Peled’s work examines the beauty and brutality of the natural world. Her sculptural language is formed by her surrounding landscapes and nature, engaging with themes of nature and memories, identity and place.

BanksyInside - A Digital Magazine Dropping What's Fresh on the Web The mysterious Banksy just released some new paintings on his website. You heard it right, Banksy painted on a canvas. All Banksy fans will appreciate. Here are a few of my favourites. Courage to Refuse - About Us Courage to Refuse was founded following the publication of The Combatants Letter in 2002, by a group of 50 combat officers and soldiers. The initiators of the letter, Captain David Zonshein and Lieutenant Yaniv Itzkovits, officers in an elite unit, have served for four years in compulsory service, and another eight years as reserve soldiers, including long periods of active combat both in Lebanon and in the occupied territories. During their reserve service in Gaza, in the midst of the second Intifada, the two realised that the missions confided to them as commanders in the IDF had in fact nothing to do with the defence of the State of Israel, but were rather intended to expand the colonies at the price of oppressing the local Palestinian population. Many of the commands issued to them were, in fact, harmful to the strategic interests of Israel.

Fine art Fine art, from the 17th century on, has meant art forms developed primarily for aesthetics, distinguishing them from applied arts that also have to serve some practical function. Historically, the 5 main fine arts were painting, sculpture, architecture, music and poetry, with performing arts including theater and dance.[1] Today, the fine arts commonly include additional forms, such as film, photography, conceptual art, and printmaking. However, in some institutes of learning or in museums, fine art and frequently the term fine arts (pl.) as well, are associated exclusively with visual art forms.[citation needed] The word "fine" does not so much denote the quality of the artwork in question, but the purity of the discipline.

The Top 75 ‘Pictures of the Day’ for 2012 *Update: The Top 100 ‘Pictures of the Day’ for 2012 have just been published. Click here to check out the most up-to-date post! After the positive reception from last year’s “Top 50 ‘Pictures of the Day’ for 2011“, the Sifter promised to highlight the top 25 ‘Pictures of the Day‘ at the end of every quarter, eventually culminating in an epic Top 100 for 2012. Toolbox - Tool for youth work and projects - or recruit participants Created to help you find and share useful training Tools, the Toolbox for training is an online catalogue you can browse through freely or even contribute to! Remember that tools alone have no influence. It is your task to adapt them to your objectives, context and target group, but most importantly to YOUR OWN SKILLS to turn them into something powerful... The Toolbox wants to be a learning community for trainers and youth workers in order to share, debate and increase the quality of educational methods in their daily work.

9 Books Scarier Than Any Horror Movie There is nothing better than a good ghost story. It might be tempting to pop in one of your scarier movies when you want to get into the Halloween spirit, but there are plenty of novels sure to keep you up for just as many nights. Just be careful if you read these titles in a public place. You might mistake the woman who just wants your extra chair as your book's monster. And no one wants to go viral as "shrieking girl in Starbucks." Image: Flickr, Maguis & David 100 Websites You Should Know and Use (updated!) Entertainment Meet David Peterson, who developed Dothraki for Game of Thrones There are seven different words in Dothraki for striking another person with a sword. Among them: “hliziﬁkh,” a wild but powerful strike; “hrakkarikh,”a quick and accurate strike; and “gezrikh,” a fake-out or decoy strike. But you won’t find these words in George R.

The 32 Greatest Unscripted Movie Scenes Much to the dismay of screenwriters, movies scripts aren’t always set in stone. They are often like living objects constantly evolving during the filming process. Some films, like Jaws and Annie Hall, don’t even have a finished script when the cameras start to roll. Actors and actresses are regularly ad libbing, improvising or going off-script while reciting their lines. Sometimes the directors hate it – other times they love it. Occasionally the improved lines become immortalized as some of the most memorable in cinema history.

How to Heal Cavities Naturally he world is slowly waking up to the fact that, when you give the body what it needs, it can heal things we previously thought were impossible. A fine example of what is often deemed as an incurable health problem is dental cavities, but extensive research is now becoming more public about the true nature of tooth decay and the fact that there are proven remedies that can remedy it. The lies perpetrated about tooth decay