10+ Best Apps For Your Dropbox 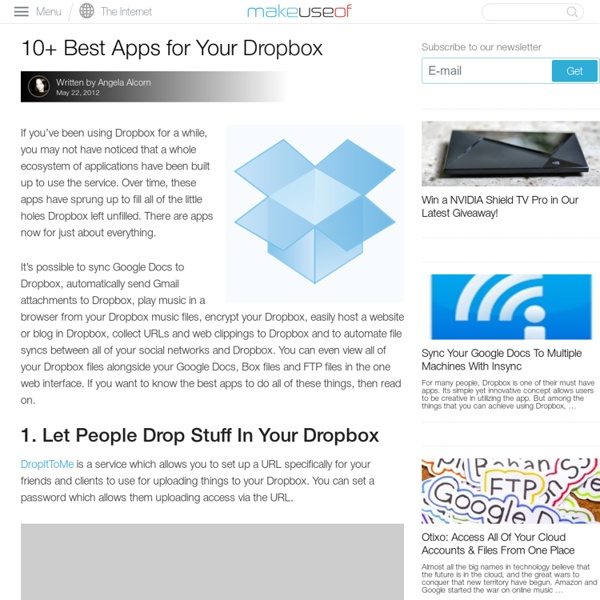 If you’ve been using Dropbox for a while, you may not have noticed that a whole ecosystem of applications have been built up to use the service. Over time, these apps have sprung up to fill all of the little holes Dropbox left unfilled. There are apps now for just about everything. It’s possible to sync Google Docs to Dropbox, automatically send Gmail attachments to Dropbox, play music in a browser from your Dropbox music files, encrypt your Dropbox, easily host a website or blog in Dropbox, collect URLs and web clippings to Dropbox and to automate file syncs between all of your social networks and Dropbox. You can even view all of your Dropbox files alongside your Google Docs, Box files and FTP files in the one web interface. If you want to know the best apps to do all of these things, then read on. 1. DropItToMe is a service which allows you to set up a URL specifically for your friends and clients to use for uploading things to your Dropbox. 2. 3. 4. 5. 6. 7. 8. 9. 10. More Links

Infinite Storage on your Desktop features infinite hard drive Keep every file you have ever owned in Bitcasa. Ditch the external hard drives, and store your files in your Bitcasa Infinite Drive to free up space on your computer and phone. Never run out of space again. access anywhere 3 Ways The Portable Apps Platform Will Make Your Life Easier Portable apps have a huge place in my geeky heart simply because they are quite numerous (if you don’t believe me, check out the Best Portable Apps here). They don’t modify the registry, and can be used in different Windows machines (though there are portable apps for Linux as well). Up until recently though, maintaining portable apps was not pleasant for me. I’d have to go into Windows Explorer and click on the executable to launch the program every time, and if there was an update to the program, I’d have to download the program and “install” it all over again.

Review - Why You Should Use Dropbox Dropbox isn’t a new entrant to the backup and sync scene. It’s been sometime since it was introduced, and has already received rave reviews and accolades from various technology sites and journals. I knew about the tool since the day it came into existence. But I didn’t jump on the opportunity to try it out.

Overview Rooms intelligently organize all your stuff. Your inbox can become a tangled mess of stuff. It's constantly filling with a stream of new messages, saved messages, forwarded messages, contacts, web links, embedded images, links to items in the cloud, all kinds of attachments: documents, spreadsheets, presentations—and plenty more. Yikes! The Best Apps for your Dropbox Meet some of the best Dropbox apps that add new functionality and extend the service beyond the realms of online storage. Dropbox has made our digital lives so much easier. You put a file in your Dropbox folder and it becomes available on mobile phone, your tablet and on all your other computers. If you have shared a Dropbox folder with another person, say your mom, any files that you add to the shared folder instantaneously appear on her computer. So useful!

Why i switched from Dropbox to Wuala I have been using Dropbox just to sync my Keepass database. It's no secret that Dropbox data transmission is not encrypted, neither is their data storage. To use Dropbox securely, a Truecrypt volume must be synced, but special settings would be necessary so that not the entire volume gets synced every time you make a small change somewhere. My business data was synced with MobileMe and iDisk, but I didn't really like that a lot. I'd had an eye on Wuala for some time now, but their pricing was always rather discouraging. How To Back Up PCs To Each Other Via The Internet Using Crash Plan Personal Backing up the data on your computer is vital. Everyone knows this. Yet not everyone does something about it. Why? Because backing up a computer remains a bit of a pain.

Launch Applications Remotely with Dropbox and AutoHotkey @freshcot: I've never used AutoHotkey, but just taking a glance at a tutorial for it I came up with this too: ScriptDir = %A_MyDocuments%\MyDropbox\ScriptDir FileList = Loop, %ScriptDir%\*.ahk FileList = %FileList%%A_LoopFileName%`n The Top 10 Best Dropbox Services, Addons and Hacks Everyone from heavy Dropbox users to those who are wondering just what the fuss is all about with this cloud syncing business should be able to find something useful to them in this list. If you’re unfamiliar with Dropbox it’s a sync service that keeps one folder, the drop box, on your computer in sync with the Dropbox server and any other computers or mobile devices that you have Dropbox installed on. It’s a fantastic way to keep a selection of files handy no matter where you are.

Top 10 Uses For Dropbox You May Not Have Thought Of For many advanced computer users, Dropbox is the premiere cloud-based storage and sharing document service. It has replaced the Documents folder on my Mac, and is the primary way I sync files between my devices. Similar and equally useful free services include Google Drive and Box.com. We’ve already covered some awesome uses for Dropbox, including How to Run Multiple Dropbox Accounts Simultaneously [Mac], how to send send files to your Dropbox without using Dropbox, how to upload files faster and easier with Dropbox, and even how to host a WordPress blog on your Dropbox account.

How to run two Dropbox instances on the same PC Why would you want to run multiple Dropbox instances on the same machine? We could think of two reasons (1) you’ve maxed out on the 16 gigs or so that each free Dropbox account can give you as a ceiling, and would like to use another account to add more, or (2) you would like to access another Dropbox account for whatever reason, such as a disposable account used by members of your team or that of someone else (such an ex employee of your company) etc. In this posting, we will describe how to run another Dropbox account to your WINDOWS machine using a third party freeware program (i.e. to install two Dropbox accounts running simultaneously on one PC). The application used: DropboxPortableAHKis a free program that can create portable instances of Dropbox, which can be carried on a USB drive, etc. Or it can be run locally alongside your existing Dropbox installation, which is what this post assumes. First things first, download the free program:

How to Get the Best of Both Google Docs and Microsoft Office SExpand Microsoft Office 2010 is about to be released, and you aren't sure if you should upgrade or switch to Google Docs. But have you considered using the best features of both, together? Today we'll run down how to do just that.P Below we'll detail when Google Docs is a better tool for a task than Office (and vice versa), highlight methods for keeping your Office documents in sync with Google Docs online so you can enjoy both offline desktop access and anywhere online access, and more.P

Personal Brain and Getting Things Done (GTD) - TheBrain Technologies Message Board I have the "GTD system" thought which has main lists such as Projects( in my case "10K Projects"), Actions (in my case "Reports"), Waiting and calendar connected to it as children. Higher level horizons of focus such as 50k life, 40K visions, 30K goals and 20K areas of focus are not children of my main "GTD system" thought because they aren't really used as much on a day to day basis as a working part of the system. I could of course still always check them whenever I want though. I have a thought "My Six-Level GTD Model" which has all horizons of focus from life purpose down to next actions. It is a native Personal Brain mind map saved as an attachment to a thought (I use my script for this functionality) I have additional lists which aren't a part of standard basic GTD system as described in the GTD book.

JustCloud What does JustCloud do? JustCloud uses a small desktop application to backup all of your computers files to the cloud. Your files are constantly backed up and you can access them at anytime from any device in the world by logging in to the JustCloud online control panel. Click 'Play' on the video to see what Just Cloud can do for you. 1. Select The Files You Want to upload