Bye-bye, tapes: How to get the right disk backup appliance. Although disk-to-disk backup methodologies have become incredibly popular over the past few years, the vast majority of enterprises -- large and small -- still use the same tape backups they implemented years ago. 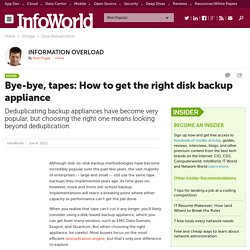 As time goes on, however, more and more old-school backup implementations will reach a breaking point where either capacity or performance can't get the job done. When you realize that tape can't cut it any longer, you'll likely consider using a disk-based backup appliance, which you can get from many vendors, such as EMC Data Domain, Exagrid, and Quantum. But when choosing the right appliance, be careful: Most buyers focus on the most efficient deduplication engine, but that's only one difference to explore. Ten Reasons Why Tape Is Still The Best Way To Backup Data.

7/23/14 | Posted by By Peri Grover, Director of Product Marketing In my last blog post, we took a look back at the advances that have been made in tape technology over the past 60 years. 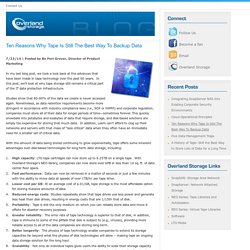 In this post, we’ll look at why tape storage still remains a critical part of the IT data protection infrastructure. Studies show that 80-90% of the data we create is never accessed again. Nonetheless, as data retention requirements become more stringent in accordance with industry compliance laws (i.e., SOX or HIPPA) and corporate regulation, companies must store all of their data for longer periods of time—sometimes forever. This quickly snowballs into petabytes and exabytes of data that require storage, and disk-based solutions are simply too expensive for storing that much data. Tape backup vs disk backup - Secure Data Recovery Services. A strong disaster recovery strategy provides essential protection for your business, but to keep your data safe, you need to choose appropriate storage media. 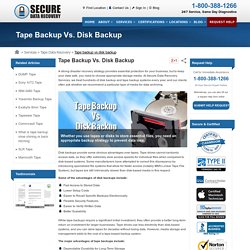 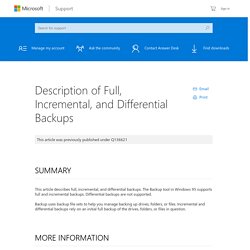 The Backup tool in Windows 95 supports full and incremental backups. Differential backups are not supported. Backup uses backup file sets to help you manage backing up drives, folders, or files. Incremental and differential backups rely on an initial full backup of the drives, folders, or files in question. Many Windows 3.1-based backup programs use the archive bit to mark files that have been backed up. Full Backup (or Reference Backup) When you set the Backup Type setting to Full, all the files and folders on the drive are backed up every time you use that file set. Example: In Backup, click the drives, files, or folders to back up, and then click Next Step. Moving away from tape backup: One SMB's journey. Mark Pimperton describes how his company's move to a disk/online-based backup system has made file restore easier and provided much improved disaster recovery. 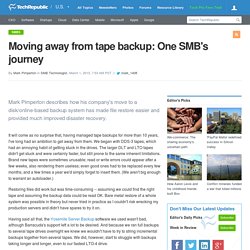 It will come as no surprise that, having managed tape backups for more than 10 years, I've long had an ambition to get away from them. We began with DDS-3 tapes, which had an annoying habit of getting stuck in the drives. The larger DLT and LTO tapes didn't get stuck and were certainly faster, but still prone to the same inherent limitations. Brand new tapes were sometimes unusable; read or write errors could appear after a few weeks, also rendering them useless; even good ones had to be replaced every few months; and a few times a year we'd simply forget to insert them.

(We aren't big enough to warrant an autoloader.) Is physical tape backup better than disk to ensure integrity. These days it doesn't actually make a huge difference. 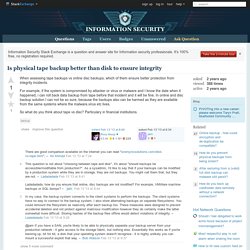 Or rather, it depends very strongly on your backup plan, disaster recovery plan, your RPO and RTO and the scenarios you expect to want to recover from. In any modern environment; you're likely to also have some sort of SAN. Your backup solution should interact with the SAN, but not the rest of the network; this allows you to back up data without exposing your backup solution to risks associated with the hosts you're backing up (this is a generalisation). The decision between disk and tape should come down to your environment and your requirements. If you need to store your data for a long time: tape, properly handled can last decades, so as long as you test their integrity every ~10 years, you should be pretty safe.

In most environments, you have a combination of disk and tape; certainly for environments with any sort of compliance overhead. To answer the question: Cloud Backup Vs. Tape: Think Hybrid. Consider a hybrid solution involving both cloud and tape resources for data backup. 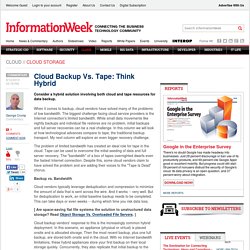 When it comes to backup, cloud vendors have solved many of the problems of low bandwidth. The biggest challenge facing cloud service providers is the Internet connection's limited bandwidth. While small data movements like nightly backups and individual file restores are no problem, initial backups and full server recoveries can be a real challenge. In this column we will look at how technological advances compare to tape, the traditional backup transport.

My next column will explore an even bigger recovery challenge. The problem of limited bandwidth has created an ideal role for tape in the cloud. Backup vs. Cloud vendors typically leverage deduplication and compression to minimize the amount of data that is sent across the wire. . [ Are space-saving flat file systems the solution to unstructured data storage? Backups are not just disk vs tape, its a blend of protection technologies (IBM NAS Storage) Yosemite%20technologies%20vtl%20whitepaper.pdf. Rise of disk storage leaves tape with specialized backup role. 10 Reasons Tape Storage Is Better Than Disk. Far from sitting back as their name is smeared in the mud by disk-based rivals, tape companies have adopted an aggressive slant to set the record straight on the technology's value proposition. 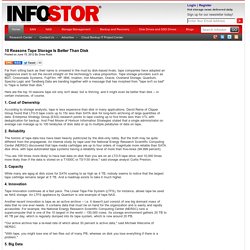 Tape storage providers such as BDT, Crossroads Systems, FujiFilm, HP, IBM, Imation, Iron Mountain, Oracle, Overland Storage, Quantum, Spectra Logic and Tandberg Data are banding together with a message that has morphed from "tape isn't so bad" to "tape is better than disk. " Here are the top 10 reasons tape not only isn't dead, but is thriving, and it might even be better than disk -- in certain instances, of course. 1. Cost of Ownership. Xtium. This post originally appeared as a contributed article on Cloud Cow Business continuity plans are a must in today’s environment, where even a few hours of downtime could be very costly in lost revenue. 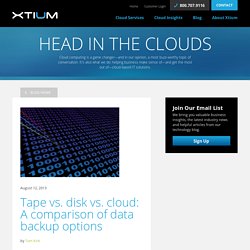 Data backup procedures are a critical part of these business continuity plans. Breaking The Top Four Myths Of Tape vs. Disk Backup. Tape Backup vs Hard Disk Backup: What Does the Future Hold? I was frequenting Spiceworks earlier today and came across a post asking if “tape was legacy”. 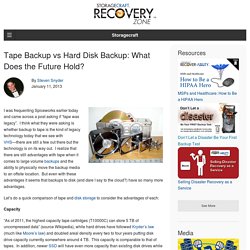 I think what they were asking is whether backup to tape is the kind of legacy technology today that we see with VHS—there are still a few out there but the technology is on its way out. I realize that there are still advantages with tape when it comes to large volume backups and the ability to physically move the backup media to an offsite location. But even with these advantages it seems that backups to disk (and dare I say to the cloud?) Have so many more advantages. Let’s do a quick comparison of tape and disk storage to consider the advantages of each: Disk vs. Tape: Which One’s Game for the Long Term?

So it's a battle you're looking for, eh? Disk versus tape is a great one to check in on: Ultimately, one will assume the "Long-Term Data Protection" title. Like any two boxers that step into the ring, each format has its advantages and weaknesses. Still, there's one clear winner for your extended data backup and recovery requirements: tape. Check out these scorecards to find out why. Tape backup vs disk backup. Tape backup is giving way to disk as a backup target, but tape still has numerous benefits that mean it is likely to be with us for a long time yet. While disk is less fussy about the throughput of your backup systems and is superb at rapid restores it is still more expensive as a medium than tape. Meanwhile, tape is cheap and boasts incredible write speeds.

Tape versus disk: The backup war exposed. The debate over whether disk or tape is the better solution for backup has been going on for some time now, and it seems the answer you get typically depends on who is responding to the question. According to many chief financial officers (CFOs), backup and disaster recovery (DR) are just like insurance policies for the business, so the least expensive method is the one they usually select. This view of data protection flies in the face of what IT operations managers deal with on a day-to-day basis. For them, protecting the organization’s critical data assets is not just an insurance policy; it’s their job. They need to assure the smooth operation, recovery and security of the applications and data that run the business, no matter what. The problem is the CFO usually wins the argument, so it all comes down to cost.

Instead of viewing the disk-versus-tape debate as a purely technical problem, I decided to look at it from a non-partisan price and performance point of view.