Xively – Public Cloud for the Internet of Things 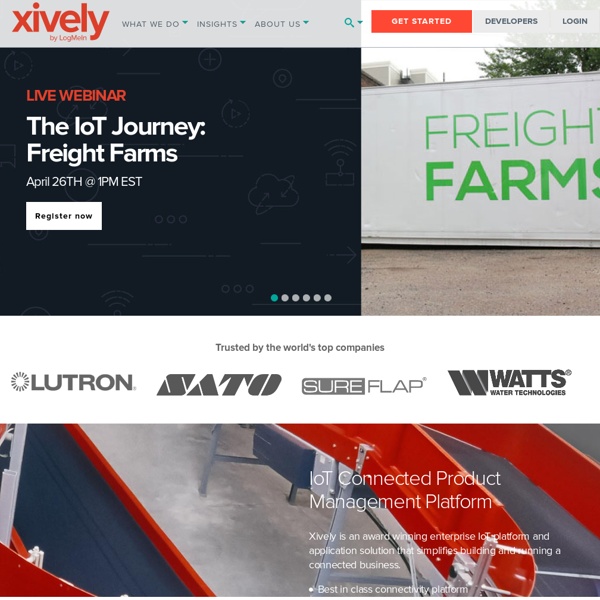 Transform businesses (and lives) Xively helps unlock and expand business potential by removing the barriers inhibiting the complete comprehension and control of your business. Continuous, 360-degree interaction with your business-connected objects delivers real-time insights that drive intelligent action. Companies are transformed into responsive organizations that can predict and fix disruptive issues before they happen, streamline operational processes, anticipate and proactively meet customer needs, and much more. Business Opportunities

The Internet of Things: What is the IoT Toolkit? This is the second of a three-part series on the Internet of Things with Atmel’s Tom Vu and Internet of Things Council member Michael Koster. Read Part 1 here. Tom Vu (TV): What is in the roadmap for IoT Toolkit? Michael Koster (MK): Welcome to ZyXEL Communications Corporation Guess where this pic was taken for a chance to win our NSA320! Protected from HeartBleed Manage, deploy, maintain Wi-Fi easily by NXC Series Controller When Simplicity Meets Smart Networking Switch. Kaspersky Labs Alliance Program More Than a Billion Enterprise Devices Are on the Internet of Things We hear a lot these days about the Internet of Things, everyday appliances connected to the Internet. But there’s another side to the IoT — using smart devices in the business environment — and rarely do we get a solid look at how big a business it is and how fast it’s growing. That changed today with the release from Verizon of a fairly comprehensive report that outlines the size of the business and the scope of its growth. For starters, Verizon (with help from ABI Research) estimates that as of 2014 there were 1.2 billion different devices connected to the Internet, and that the number will rise to 5.4 billion by 2020 for an annual growth rate of 28 percent.

My Favorite App at SXSW There are many apps on your smart phone. How many do you really use? Me: Yelp, Facebook, Twitter, Huffington Post, Lastfm, and Google maps. My 100 other ones collect dust because they don’t solve a problem or are a bad imitation. At SXSW I discovered an unique app called iTouru: remember listening to an audio tour at a museum, now imagine if the entire world had an audio tour. These stories could provide new perspectives for a city.

Join the Gatesense project During 29 and 30 November the first Gatesense Hackaton took place at Copenhagen Business School (CBS) facilities. We welcomed 30+ eager hackers and entrepreneurs from all over the world, including Germany, Denmark, Poland, China, USA and Holland and representing all profiles from hard core software developers to Elon Musk-like visionary entreprenours. Four Hackaton teams worked on: Generic Middleware of the Gatesense platformGatesense toolbox – Open Source plug-insDevelopment of a traffic app Building a Gatesense community worldwide and Gatesense business models After two days of intense sessions, the groups presented their result.

Dragrove - Generic gateway for internet of things Dragrove is an open source based generic gateway for internet of things. It combines Dragino (Easy Internet Access, powerful CPU, Linux system), Arduino compatible interface board (monitoring and controlling the physical world), and RF networks like X-Bee. Dragino MS12 is a wifi/linux enabled appliance for MCU projects. The goal of the Dragino is to solve the connectivity problem and greatly enhance microcontroller products. The Arduino compatible daughter board provides plug and play interface like Grove, it also provides 8 IO terminals for developers to easily create Internet of things projects, Robotics, Smart Home, Wireless Sensor Networks and many beyond. Features:

PowerMeter - Save Energy. Save Money. Make a Difference. We launched Google PowerMeter as a free energy monitoring tool to raise awareness about the importance of giving people access to their energy information. PowerMeter included key features like visualizations of your energy usage, the ability share information with others, and personalized recommendations to save energy. We partnered with device manufacturers and utilities around the world. Many of our partners now have new options available for accessing energy information. Right Now, the Internet Of Things Is Like The Internet Of The 1990s Unless you think of technology as a geeky hobby unto itself, giving an Internet connection to everyday objects might seem like a waste of energy. Who needs really needs an online toaster, anyway? But just as the Internet was easy to underestimate in its infancy, this new push to connect everyday devices—a concept known as the "Internet of Things"—is barely representative today of what it might become tomorrow. And the parallels go beyond just potential. Today's Internet of Things faces a lot of challenges and setbacks reminiscent of the Internet of the '90s. If tech firms can get over these hurdles, the effects could be just as far-reaching.

A totally new medium for storytelling 6,000 Stories You Can Take With You (And Counting) With the Broadcastr app, there is a new story to discover around every corner. Available for free download on the iPhone, the location-aware app allows users to automatically stream stories about their surroundings. Or, if you feel moved by the muse, you can record your own stories and pin them to the map for other users to enjoy. Download your Broadcastr app here! Broadcastr, a project of Electric Literature, is a social media platform for audio-storytelling shared on an interactive map. Internet of Things: get yourself connected In an emerging world where everything is connected to everything, the Internet of Things is poised to transform every walk of digital life, from manufacturing to media production. What will this brave new world look like and how close are we to seeing it become a reality? Even though it's getting very close, we're not quite there yet. According to Thomas Svensson, senior vice president, EMEA, at Thingworx – a technology company that has created a software platform specifically to build and run innovative machine-to-machine (M2M) and Internet of Things (IoT) applications – we are on the point of taking intelligence "to a whole new level".