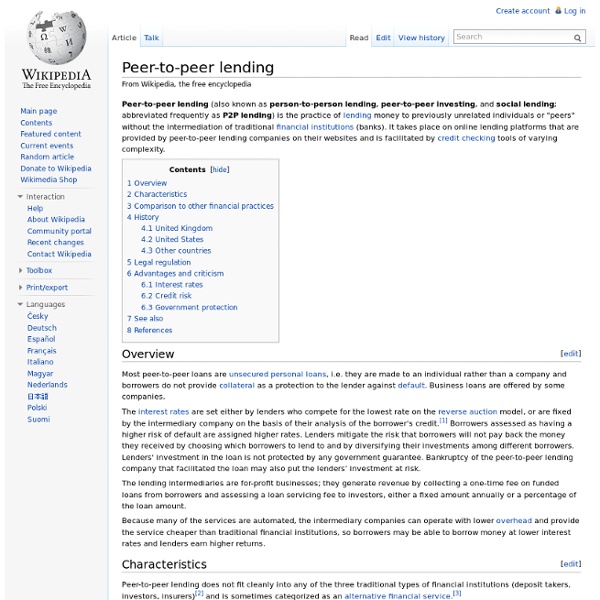 Peer-to-peer lending (also known as person-to-person lending, peer-to-peer investing, and social lending; abbreviated frequently as P2P lending) is the practice of lending money to unrelated individuals, or "peers", without going through a traditional financial intermediary such as a bank or other traditional financial institution. This lending takes place online on peer-to-peer lending companies' websites using various different lending platforms and credit checking tools. Overview[edit] The interest rates are set by lenders who compete for the lowest rate on the reverse auction model, or are fixed by the intermediary company on the basis of an analysis of the borrower's credit.[1] Borrowers assessed as having a higher risk of default are assigned higher rates. Lenders mitigate the individual risk that borrowers will not pay back the money they received by choosing which borrowers to lend to, and mitigate total risk by diversifying their investments among different borrowers.

Could Crowdfunding be the way to raise funds for Start-ups and growing businesses? | Wildfire Crowdfunding Your Start-up Business Raising money for a business can be really tough, especially since the big financial crash, it feels as if the lending by banks has come to an end for small businesses and new start-ups. Banks have become more strict as to who they will lend their money, making it hard to get a loan for a new start or to buy equipment for an existing business. If you are one of the lucky ones who get offered a loan, then you might find that the banks want security or the rates of interest they charge are well above what you can afford, even though the bank of England interest rates are at an historic low of 0. 5%. Where do people go to raise funds?If you already have savings of your own and can afford to invest the money into the business then this is usually the preferred option. Friends and FamilyIn most cases a new start-up ends up asking for financial help from a direct or extended family member or friends. Some Crowdfunding statistics to get you motivated:

Jeffrey Tucker: Bitcoin Makes The Dollar Look Like A Dinosaur Peer-to-peer lenen How is crowdfunding changing culture? | Culture professionals network | Guardian Professional Crowdfunding has developed from a digital quirk to a powerful tool – this much we've talked about. But there is something even deeper going on with this new model, one that's less predictable than civic participation and far more disruptive. Kickstarter itself is changing under the influence of digital culture. At first it was about making established forms of art. The first million dollar project on Kickstarter was the Pebble watch. Is it possible that crowdfunding is telling us something rather profound – that the most important and popular form of creativity at this point in history is not 'useless' art, but digital invention? I think it is. When Kickstarter started out it decided not to prioritise (or curate) which creations were most important. This new communal instinct can do amazing things like route around the warping influence of capitalism and digital platform wars. Firstly, it is fostering the new 'maker' culture with projects like Stompy and Makey Makey.

AF Bitcoins | Bitcoins charts and analysis What is Kickstarter 1. Kickstarter is a new way to fund creative projects. We’re a home for everything from films, games, and music to art, design, and technology. Kickstarter is full of projects, big and small, that are brought to life through the direct support of people like you. Since our launch in 2009, 6 million people have pledged $1 billion, funding 60,000 creative projects. 2. The filmmakers, musicians, artists, and designers you see on Kickstarter have complete control over and responsibility for their projects. 3. Project creators set a funding goal and deadline. 4. Backers are supporting projects to help them come to life, not to profit financially. 5. Mozart, Beethoven, Whitman, Twain, and other artists funded works in similar ways — not just with help from large patrons, but by soliciting money from smaller patrons, often called subscribers. 6. It’s supporting their dream to create something that they want to see exist in the world. 7.

Gold in them bits: Inside the world’s most mysterious Bitcoin mining company This is the first in a two-part series exploring Butterfly Labs and its lineup of dedicated Bitcoin-mining hardware. In part one, we look at the company and the experiences customers have had with it. In part two, to be published on June 29, we share our experiences running a Bitcoin miner for a couple weeks. Spoiler alert: we made money. The more I dig into Bitcoin, the stranger it gets. There’s gray-market online gambling and Russian-operated futures markets—to say nothing of the virtual currency’s wild ride over the last several months. While reporting on a Bitcoin-based gambling story earlier this year, I interviewed Bryan Micon, who works with a Bitcoin-based poker site called Seals With Clubs. His latest target is Butterfly Labs (BFL), a US-based company that makes ASIC-based Bitcoin miners. New orders for the next-generation machines flooded in. BFL initially estimated a ship date of late November 2012, but the deadline passed and the ASIC machines didn't appear. The bet

CivilisedMoney: The Future Of Finance? / Money Watch November 3rd, 2011 1 Comment » | POSTED BY ROB A new website has launched which is promising to be a “game-changing alternative to conventional banking”. CivilisedMoney is the brainchild of Neil Crofts and Jason Scott, who hope that people-to-people technology will revolutionise funding, investing and lending, making it more transparent, fairer and indeed, more civilised than from traditional sources. civilisedmoney will enable people to invest, donate, lend, borrow and transact money with each other directly at fair and transparent rates, cutting out need for the middlemen, the banks. Lenders such as Zopa have shown that peer-to-peer services can be successful and civilisedmoney will be bringing together a range of these services. They’re also using CrowdCube to secure some of their own funding, giving all of us the opportunity to own part of the business for as little as £10. Related Posts Tags: banking, CivilisedMoney, p2p

Germany recognizes Bitcoin as a “private money,” subject to capital gains tax In response to a query by a member of parliament, the German Finance Ministry has declared (Google Translate) that it accepts bitcoins as a “unit of account.” The Ministry added that bitcoins are a sort of “private money” and that mining bitcoins constitutes “private money creation.” The Ministry also clarified that if a German taxpayer holds bitcoins for more than a year, she is exempt from paying the 25 percent capital gains tax. Such a tax would ordinarily be paid after profiting from the sale of a stock, bond, or other security. How would the Finance Ministry even know if a taxpayer holds bitcoins? The German lawmaker, Frank Schäffler—a member of the Free Democratic Party (FDP), a pro-business, center-right party—wrote on Twitter that famed Austrian economist Friedrich Hayek would be happy with this decision.

The 5 Keys To Business Success | Create Your Business Breakthrough Diane Conklin Title: The 5 Keys To Business Success Diane Conklin is an internationally known author, entrepreneur, coach, consultant, and speaker. Diane is a direct response marketing expert who specializes in showing small business owners how to integrate their online and offline marketing strategies, media and methods, to get maximum results from their marketing dollars. Diane has been involved in numerous campaigns grossing over $1,000,000.00 several times in her career and routinely helps people grow businesses to 6 figures, and beyond in short periods of time. Diane was voted Glazer-Kennedy Marketer of the Year for her innovative marketing strategies and campaigns. Diane's Free Gift for Create Your Business Breakthrough Viewers! Free Gift:“The 9 Key Building Blocks For Starting & Building Your Information Marketing Business”: www.CompleteMarketingSystems.com

One Stop Funding - Home Page We have an existing portfolio of Hire Purchase Agreements in excess of £700,000 net financed with a total receivable under those agreements in excess of £1,600,000. This represents security with a value of over double the original investment, giving a significant margin against defaults. These existing agreements are being offered to lenders in order to facilitate our continued growth. As the lender you will have the specific Hire Purchase Agreement/s assigned to you to act as security against your loan to us. The Hire Purchase Agreements are with our finance subsidiary which is 100% owned by One Stop Car Credit Ltd (OSCC). The trading activities of OSCC are restricted to raising financing for the business and administering those loans.