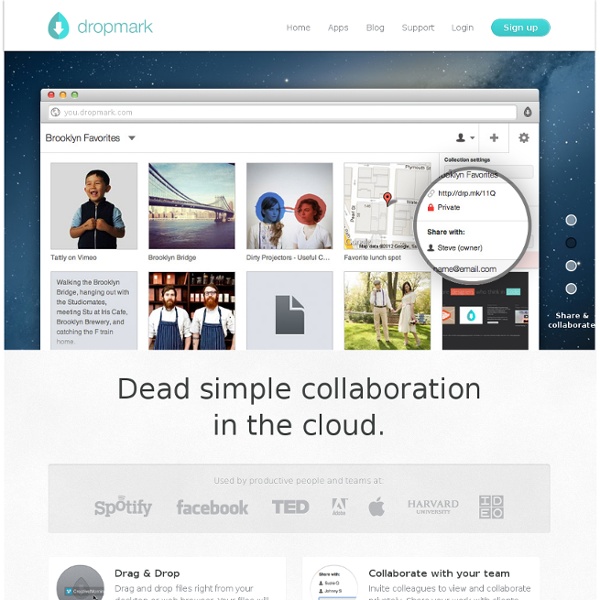 Upload, sync, host, and share files for free - Uploadingit Yacy - The Peer To Peer Search Engine 10 Great Tools to Integrate with your Google Docs Since Google officially changed Google Docs name to Google Drive and a number of updates have been introduced to improve its overall performance. One very recent update is an increase of cloud storage capacity to 15GB usable across Gmail, Drive, and Google Plus. It is quite obvious that Google is trying to outsmart its immediate competitor Dropbox and I think Google is successful in its strategy so far. To make Google Drive stand out from the crowd, Google opened it to apps developers and allowed users to select from a wide variety of web apps to integrate into their Google Drive accounts. With the integration of these apps, users can now handle their files and documents ways not affordable by any other cloud storage tool out there. I have curated for you some interesting apps that are integrated into Google Drive and which you can install right from your Google Drive interface. Here is a list of some great apps to use with your Google Drive : 1- WeVideo 2- PicMonkey 3- Google Forms app

Zoho Notebook | Blog Quick note: All Zoho servers are patched, and your data is safe. The details: Soon after the information about this vulnerability became known, we started patching all our servers using the newer, protected versions of OpenSSL. This operation was completed in a few hours after the news broke out. We renewed our SSL certificates too. So, we are no longer vulnerable. As of now, we have no indication that the vulnerability has been exploited against any of the Zoho applications. 1. We will update this post, as and when we have more new info about the vulnerability. Every year it’s the same. Where did the time go? If you’ve been to SXSW Interactive in the past, you know the pandemonium that is about to ensue starting today and lasting through next week. In its 27 years, SXSW has gone from a music conference with roughly 300 badge holders to a music, film and interactive festival with over 50,000 attendees. Read more As a small business owner, one needs to stay inspired at all times. Read more

Hopper — Save links, text, images, and files in moments. Online Backup - Memopal About ChartsBin.com What is ChartsBin? ChartsBin is a web-based data visualization tool that will allow everyone to quickly and easily create rich interactive visualizations with their own data. You can then share your interactive visualizations with others by embedding them in websites, blogs or sharing via Facebook or Twitter. We're focused on building the most exciting and engaging destination for statisticians, and computer scientists in the world. Who is ChartsBin for? This site would find love among those who like stats and graphs; for anyone who wishes to see the boring research data in a refreshing way. What makes ChartsBin different? create interactive visualizations online instantly! Additionally, you can download compiled dataset (CSV, XLS, SQL). Where We've Been Featured and Mentioned We're honored to have been reviewed/featured/mentioned recently in the following media: Thanks ChartsBin is proudly powered by open source software.

One Stop Resource for Google Docs If you’re a Google Docs user, curious about Google Docs, work with Google Docs with students, and especially if you’re looking for help understanding all of the features of Google Docs, then you’ve got to bookmark MaryFran’s Google Docs Tutorials. Created as a Google Site (of course), this is a huge collection of resources, tutorials, videos, … all devoted to helping the visitor understand the ins and outs of working with Google Docs. That’s really the best description I can think of to describe this site. Navigation and use is as simple and powerful as Google Docs itself. Just select a topic of interest from the left side navigation menu and read on. Screen captures are included along with complete descriptions of just what activity is being discussed. Google Docs users – make sure that you bookmark this resource. Powered by Qumana Like this: Like Loading... Related OTR Links 12/16/2011 Main Page - Math Lesson and Unit Plans page divided by grade level and strand. In "Links" OTR Links 04/09/2012