Set Up an Automated, Bulletproof File Back Up Solution 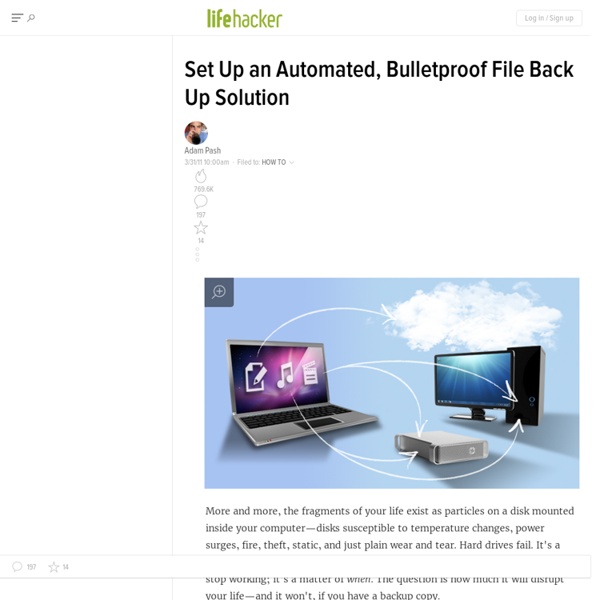 The Best Articles for Backing Up and Syncing Your Data World Backup Day is March 31st and we decided to provide you with some useful information to make backing up your data easier. We’ve published articles about backing up various types of data and settings both offline and online. There’s all kinds of settings on your computer to backup in addition to your personal data, such as Wi-Fi passwords, drivers, and settings for programs like web browsers, Office, and Windows Live Writer. There are also many tools available to help you keep your data and settings backed up. Windows Backup utilities in previous versions of Windows have been less than wonderful, most likely prompting you to use third party tools to backup your data (we discuss third party tools later in this article). Virtual Hard Drives We have written about the free, open source tool, TrueCrypt, that you can use to encrypt hard drives. Windows Home Server Windows Home Server (WHS) is meant to be installed on a central storage unit in a home or small office. Linux Ubuntu Live CD

Five Best Offline Backup Tools Here's how Acronis True Image Home saved my butt three times in three different ways, all in a single week. 1. The hard drive on my friend's laptop gave us warning that it was going to implode, so we backed up the entire drive to Acronis on an external USB drive. The next day the drive crashed. I bought a new drive and restored the image from the USB. I booted from Acronis CD and restored from the USB. 2. 3.One of my laptops that runs Windows 2000 (I am a developer and must support multiple OS) got trashed. Hint: This might sound like a lot of work, but whenever I feel that my system is stable, I do a full Acronis image backup. I know it sounds like a lot of work, and Mac users are probably laughing about how quickly Windows machines become unstable.

Modem losing connection/cycling - Comcast Help and Support Forums I just went through the same issue. It took months to get it fixed. It did not take so long because of massive repairs; it took so long because I did not have a competent tech the first three times from Comcast. Here is my post from my thread a couple of days ago explaining what happened. BTW.... I have the same SB6121 modem. @ i-am-nerdberg - So the problem has been resolved. This had been escalated several times and other techs came out but they just put their meters on the line and said everything looked good. The last tech (John) that came out was on his way up the technical ladder @ CC and had been accepted for a position in Denver and he would be leaving in a few weeks. He did two things when he was here. 1) He replaced the connectors on the lines comming into my building. 2) He could not see my modem from his Data Service Phone he carried so he did some checking. So the moral of this story is insist on a top technician.

The Best Online Backup App for Windows You can use CrashPlan with WHS 2011. See the link below. I have an HP MSS with WHS 2011 and will be installing CrashPlan on it very soon. [www.mswhs.com] It isn't free, but you might check out Jungle Disk server edition. It uses Amazon's cloud storage. The software itself costs $5/month and then you pay Amazon's storage fees. I used to use it myself, but then decided to forgo the online backups. I figure that gives me at most a one-week-old remote backup in the event of a real catastrophe (like, say, a fire). Also, everybody in my household uses DropBox and I've set it up so that everyone stores active projects in the DropBox folder. JungleDisk USED TO use S3. That is disappointing.

How to Keep Your Workflow in Sync Across Computers @geminidude: Oh, I forgot to add, under my mapped network drive folder (X:) I have a dedicated folder for all application data (X:\appdata\). This way I can keep all of my application settings in sync across all computers as well. So when I use specific applications, I'll know that all settings for that app are in sync across all computers. I also forgot to add #4 best solution: Hosted Microsoft Exchange Email. Questions? I doubt offline folders is as effiicient as rsync/unison at keeping files in sync... Your setup looks naive. Windows should introduce the ability to keep multiple desktops in sync - not just file-wise. I obviate to that lack by using a SCASE (Self Contained And Synchronising Ecosystem) like Firefox. @Adriano - Thanks for keeping a 3 year old discussion alive :-) Needless to say, I'm still using Windows Offline Files to this day and it works just as well in Windows 8 now. I use Offline Files across a laptop, surface tablet, and two desktops now.

Set Up a Foolproof and Fireproof Automatic Backup Plan @AmphetamineCrown: If ALL your data is "mission critical" then yes, several weeks to recover is useless. (though BackBlaze, prices same as mozy, offers to put your data on disks or drives and ship them to you overnight, not bad, and you keep the HDDs you buy if you need to, and they're reasonably priced). However, how much of your data matters NOW? 2GB, 5GB, 30GB? I seriously doubt your 2TB of movies are mission critical. It might be a pain not having your whole music collection for 4 or 5 days while it re-downloads after your critical files, but it's not that big of a deal. Trust me, local backups often are completely unreliable to begin with. Me, I send everything to BackBlaze (took about 7 weeks to get it all there). I worked for a DR firm.

The Best Disk Cloning App for Windows Except if you are running Windows Server with software RAID. If anyone knows of a livecd that can handle software raid 5 under NTFS, please feel free to mention it. There are multiple ways to handle this. a) Backup the data using your favorite bare-metal tool, restore to any new disk setup however you like. b) use dd as described above to clone all the disks in your RAID-set. Be certain to install them back using exactly the same order in the controller connectors and disk controller. I've migrated software RAID on Linux in this way, but don't know how picky Windows is - I expect the answer to that is "extremely picky." For others to answre, the specific version of "Windows Server" may be important to the answer as would the specific RAID5 config - 3, 4, 5 disks? I use Linux Live CDs for tons of stuff.