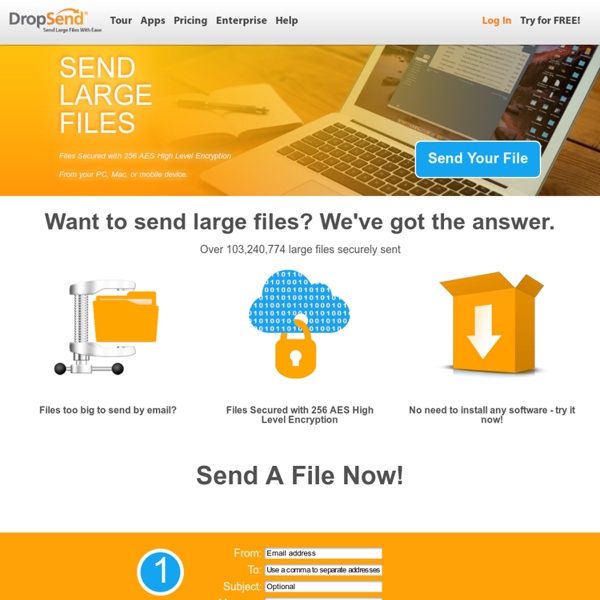 Compare SkyDrive, Google Drive and Dropbox We compare the features of Windows SkyDrive, Google Drive and Dropbox to help you pick the best file storage and sync service for your specific requirements. You have your files, photos and documents on your home computer that you would like to access from other locations on different devices. Dropbox has been the de-facto choice for long but that could potentially change as Microsoft and Google have just entered the arena with the launch of Windows Live SkyDrive and Google Drive respectively. The three services are very similar – you get online storage (you can access your files anywhere) and file synchronization – edit a document on one computer and the changes are propagated to all your other computers almost instantly. Let’s see how these online drives stack up against each other: Supported Platforms

NEW!!!! Destroy someone's Computer! : OFF Topic vampyre is right.1. LIL DEVIL IS AN A-HOLE2. THAT IS HACKING WHICH IS ILLEGAL3. JustCloud What does JustCloud do? JustCloud uses a small desktop application to backup all of your computers files to the cloud. Your files are constantly backed up and you can access them at anytime from any device in the world by logging in to the JustCloud online control panel. Click 'Play' on the video to see what Just Cloud can do for you. 1. Select The Files You Want to upload Info: 16 aplicaciones web para transferencia de archivos File sharing services are not as popular today as they were four years ago. It’s not that people are sharing any less. Rather, they just found easier ways to do it. Would you upload a funny video from a friend’s email to any of those services or would you search for it on Youtube and share only the link? Would you upload an MP3 file in order to share with whomever, or would you search for it online, grab the link and then share it? And finally, would you use a file-sharing app just to share a picture on Facebook when you can do it directly from your desktop to your Facebook profile?

Cloud Explorer for SkyDrive Microsoft Office Mobile is the official Office companion optimized for your Android phone. You can access, view and edit your Microsoft Word, Microsoft Excel and Microsoft PowerPoint documents from virtually anywhere. Documents look like the originals, thanks to support for charts, animations, SmartArt graphics and shapes. When you make quick edits or add comments to a document, the formatting and content remain intact.*

The Open Organisation Of Lockpickers This is a repository of the most up-to-date versions of Deviant's lock diagrams and animations. Seen in all of the TOOOL educational materials and slide decks, these files are all released under the Creative Commons license. You are free to use any of them for non-commercial purposes, as long as they are properly attributed and the same freedom for others is maintained in all derivative works.

Top 10 Uses For Dropbox You May Not Have Thought Of For many advanced computer users, Dropbox is the premiere cloud-based storage and sharing document service. It has replaced the Documents folder on my Mac, and is the primary way I sync files between my devices. Similar and equally useful free services include Google Drive and Box.com. We’ve already covered some awesome uses for Dropbox, including How to Run Multiple Dropbox Accounts Simultaneously [Mac], how to send send files to your Dropbox without using Dropbox, how to upload files faster and easier with Dropbox, and even how to host a WordPress blog on your Dropbox account.

Dropbox (service) Due to trademark disputes between Proxy, Inc. and Evenflow (Dropbox's parent company), Dropbox's official domain name was "getdropbox.com" until October 2009, when they acquired their current domain, "dropbox.com".[7] OPSWAT reported in their December 2011 market share report that Dropbox held 14.14% of the worldwide backup client market, based on number of installations.[8] In May 2011, Dropbox struck deals with Japanese mobile service providers Softbank and Sony Ericsson. As per the terms of the deal Dropbox will come preloaded on their mobile telephones.[9] In April 2012, Dropbox announced a new feature allowing users to automatically upload photographs or videos from camera, tablet, SD card, or smartphone.